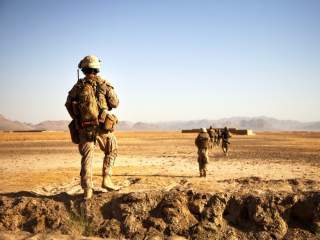 In testimony before the House Armed Services Committee yesterday, Commander of U.S. Forces in Afghanistan Gen. John Campbell told the House members that America should continue to provide military assistance there at least five more years. “Now more than ever, the United States should not waiver on Afghanistan,” he said, because Washington needs to “provide the Afghans the time and space for them to continue to build their resiliency." He also said he wanted to keep the full 9,800 troops currently deployed there for as long as possible. What the general didn’t address, however, was if a higher troop number can accomplish America's security goals. It can’t.

It’s hard to overstate how dramatically the situation on the ground has deteriorated in the past five years, and especially over the last twelve months. It hasn’t mattered if the United States had 100,000 troops, as it did in 2010; the 38,000 troops it had in 2014; or the current number of 9,800. The Taliban continue to grow in strength, the government continues to founder and now ISIS is making significant inroads into Afghanistan.

Late last month President Obama’s pick to become the next commander of U.S. Forces in Afghanistan, Lt. Gen. John W. "Mick" Nicholson, testified at a confirmation hearing before the Senate Armed Services Committee, specifying that America’s objectives in Afghanistan were to “defeat al Qaeda and its affiliates, contribute to regional and international peace and stability, and enhance the ability of Afghanistan to deter threats against its sovereignty, security and territorial integrity…” By every measure, the U.S. military mission in Afghanistan has outright failed to attain those objectives.

Lt. Gen. Nicholson also told the senators that the Afghan National Defense Security Forces (ANDSF) “continue to demonstrate that they are a competent and confident force, and have embraced their role in securing Afghanistan. The ANDSF enjoy the support and confidence of the majority of the Afghan people…” Yet in December the Center for Strategic and International Studies published an extensive analysis of the state of affairs in Afghanistan after thirteen years of U.S. military intervention that firmly rebuts such a claim.

The report found that “the Afghan government and Afghan forces are losing at every level: Politics, governance, economics, security, and popular support. This becomes brutally clear from the metrics available on the war, as well as from virtually all media reporting.” But Pakistani journalist Ahmed Rashid states that even this dire assessment might be understating the degree to which security has collapsed.

In a report filed this past Monday, Rashid wrote “The Taliban control almost all the major roads in the country, which they can shut down when they choose, thereby isolating the major cities and preventing the supply of foodstuffs and trade from six neighboring states. . . . Afghanistan is facing a multidimensional civil war with the Afghan Taliban, which is being aided now by a plethora of groups such as al-Qaeda, the Islamic Movement of Uzbekistan, Chechens, and Pakistan’s Lashkar-e-Tayyaba. . . ”  Perhaps most discouraging, he said “corruption and warlordism have become an essential part of the [governing] system and the population has gradually lost faith in [the government’s] leadership.”

By the end of Fiscal Year 2013 the United States had poured more than $640 billion into the military and political mission in Afghanistan. Each year, serious discussions and Congressional hearings are held to examine strategies and potential troop numbers. Yet the (very large) elephant in the room remains the fact that none of the strategies, the military plans or the number of boots on the ground have succeeded. To the contrary, the failure grows worse by the year.

At some point the American people and Congress have to demand accountability for those setting policy and military strategies that utterly fail to achieve ever illusory U.S. objectives. The current debate about whether we should have 9,800 or 5,500 service members in Afghanistan is unreservedly futile—neither will accomplish stated American goals. If the desire is to improve security for American citizens and interests worldwide, then changes are required. Dramatic changes. Tinkering around the margins with failed strategies can only produce more and greater failure.