A Troubling "World Island" Grand Tour: A World on Fire 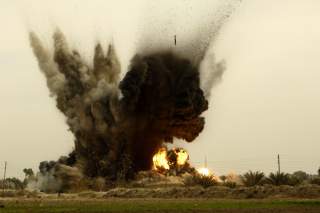 Even though President Obama did an about-face and militarily reintervened in Iraq, one still gets a sense that he does not apprehend the gravity of security events in the world. As the world’s security erodes at an alarmingly fast rate, now is a good time to step back from the liberal philosophies of international relations that capture the American worldview and the Obama administration and look anew at the world through conservative-realist lenses.

Geopolitics has fallen out of fashion in the study of international relations and foreign policy in the United States, but it is an intellectual foundation for realism. Few observers today notice the absence of geopolitical discourse save a few. A return to geopolitical analysis would help make sense of the spreading and sprawling international anarchy from which the world suffers.

One shining reference point in geopolitics is the work of British geographer Sir Halford John Mackinder, who died in 1947. When most people look at a world map, they see oceans populated by continents. But Mackinder looked at the world differently and saw Africa, Europe and Asia as a single landmass stretching from Europe through Russia, into the Middle East and over to South Asia and Asia. He called that landmass the “World Island.” Mackinder reasoned that any power that could control East Europe would command the heartland of the World Island, and, in turn, command the entire world. As distinguished military historian Lawrence Freedman reflected, “What Mackinder offered was a way of rooting the higher-level strategic discourse in the interaction between states and the enduring features of their environment.”

The World Island today is ablaze with fires of conflict. And these fires mingle and combine in today’s globalized world to an extent unprecedented in human history. Events at the western coast of the World Island impact events in the central and eastern coasts, and vice versa. The cascading effects of conflict travel across the World Island at the speed of Internet and into the minds of rivals, friends and foes.

The World Island’s coast in North Africa is on fire with political instability. Libya is torn by war between tribal militias and Egypt has resorted to an authoritarian dictatorship masquerading as a democratically elected government. Militant Islam is fueling violence beneath the Sahara, causing massive refugee flows up into northern Africa and into Europe. These refugees add to others fleeing violence and economic turmoil from the Middle East and South Asia. These increasing immigration flows are placing acute demographic pressures on European states. Refugees in the world today number some 50 million people, the greatest number of refugees since World War II.

Close to the heartland of the World Island, Russia has started a fire and Europeans are paralyzed with shock and apologetics that war has returned to Europe. While European states and NATO over the past two decades triumphantly celebrated the “winning” of the Cold War, they imprudently allowed their military prowess to disintegrate. Russia, meanwhile, nurtured its bitter, wounded pride and began rebuilding its military forces. Russia used a cunning mixture of intelligence, propaganda, duplicitous diplomacy, paramilitary, special-operations forces, threats of conventional military power and coercive economic power to conquer Crimea. Moscow is using the same toolkit—with the deadly addition of medium-range surface-to-air missiles that undoubtedly downed a Malaysian passenger aircraft—to dismantle what is left of Ukraine. Russia threatens to employ the same arsenal to intimidate (or worse) the Baltic States, and states in the World Island’s heartland. European nations are intimidated by a Russia that could retaliate against them economically with restrictions of energy supplies and investment, should they move to implement more assertive economic sanctions on Moscow.

In the center of the World Island, the Middle East is ablaze with the upending of governmental authorities and the degeneration of nation-states formed out of the post–World War I rubble. While the collapse of the Ottoman Empire led to the redrawing of political maps in the Middle East, the rapid regeneration of militant Islam is redrawing states on the World Island today. Osama bin Laden was put into a body bag and his old Al Qaeda leadership has been eclipsed by a variety of metastasized militant Islamic movements located around the World Island from Boko Haram, to Al Qaeda in the Islamic Maghreb, to Al Qaeda in the Arabian Peninsula, to al-Shabaab and to the Islamic State in Iraq and al Sham (ISIS), which essentially erased the border between Syria and Iraq.

ISIS, or the Islamic State as it now calls itself, has ushered in a new era of sectarian warfare between Sunni and Shia Muslims, each backed by regional rivals. Al Qaeda’s founding fathers sought the capture of a nation-state, the pinnacle of power in international politics, but they never managed to gain control over Egypt or Saudi Arabia. But what the old Al Qaeda leadership tried to do and failed, the Islamic State might yet accomplish in Syria, Iraq and beyond. What was once sub-rosa and proxy warfare is now open war between Islam’s sects, the central battle space is in Iraq, where one of the schism’s culminating moments, the Battle of Karbala, took place more than a millennium ago.

While the post–World War I borders go up in smoke, Iran is using negotiations to come out from under international sanctions while preserving its robust nuclear infrastructure. Tehran wants to eventually emerge as a nuclear-weapons state to aid its bid for regional domination over Arab Gulf states and for counterbalancing the power of the United States and Israel. Saudi Arabia and the Gulf Arab states will not stay idle and will look for their own nuclear weapons to balance Iran, not trusting the United States for security backing. The Arab Gulf States judge that Washington is much too eager to protect Iraq’s Shia and to negotiate a nuclear deal with Iran. The Arab Gulf states fear that at their expense, Washington and Tehran are pushing to reestablish the American-Iranian strategic partnership that was severed by the 1979 Iranian revolution.

Farther to the east along the southern coast of the World Island, South Asia is smoldering. Afghanistan looks poised to return to higher levels of violence as the Taliban grows in strength in anticipation of the eventual withdrawal of American and international forces. Across the border, the Taliban is striking Pakistani forces with increasing intensity to shame the civilian government and military and security services that for too long nurtured the Taliban fighters now setting fires in Pakistan. The Pakistanis, meanwhile, harbor conspiratorial fears of India and compensate for their conventional military inferiority by building up already-large nuclear-weapons inventories. The toxic mix of political instability, militant Islamic terrorism and insurgency raises dangers that Pakistani nuclear weapons could someday fall into the hands of Al Qaeda, the Taliban or the Islamic State.

At the eastern coast of the World Island, China is pressing its geopolitical weight against smaller neighbors. Beijing is building up its military power and is increasingly flexing it by asserting sovereignty over disputed islands in the South China Sea, intimidating Vietnam, the Philippines and Japan. At the same time, China’s troublesome ally North Korea continues to erratically threaten war as it assiduously works on its ballistic-missile and nuclear-weapons programs. If China’s Pacific neighbors are jittery about Beijing’s growing military matched by increasingly belligerent nationalism, India is also taking notice and building up its military to counter China. Meanwhile, Pakistani military officers endlessly worry that India’s military modernization is aimed at them. This acute security dilemma could yet bring Pakistan and India over the brink and into nuclear war, a scenario that neither side wants, but, more alarmingly, that neither side thinks possible.

The tour of the World Island’s fires exposes the weaknesses of many liberal visions for international politics that are shared by Obama-administration officials whose minds were incubated at the Cold War’s closing. Globalization appears not to have fostered the mutual economic interdependency between states that Joseph Nye and Robert Koehane argued (in Power and Interdependency) would lessen the role of force in relations between states. Russia and China today are much more economically integrated into the global economy than they were during the Cold War. Yet, that integration has not stopped Russia from militarily occupying Ukraine’s territory. Nor has China shied away from a military buildup and “salami-slicing tactics” to broaden its sphere of influence and control in Asia at the expense of American security partners in Asia. Democracy has not triumphed and ended history in a Hegelian sense, as envisioned by Francis Fukuyama's End of History. Not all peoples of the world acknowledge Western democracy as the destiny of mankind as evident by the rise of Russian and Chinese militant nationalism and the Islamic State’s march to break nation-states and establish unity between mosque and state under Sharia Law, just as Iran has rejected Western civilization’s separation of church and state. History, to the contrary, seems to be accelerating at a breakneck pace. The world has not ignored political squabbles to exclusively pursue rational economic interests as Thomas Friedman argued in Lexus and the Olive Tree, and as painfully evidenced by another round of war between Israel and Hamas in Gaza. Contrary to liberal hopes, the World Island is not breaking out into a Kantian democratic peace, but rather, a Hobbesian state of war in which there is a general inclination of all mankind toward a perpetual and restless desire of power that ceases only after death.