Ukraine or the Rebels: Who Won in Minsk? 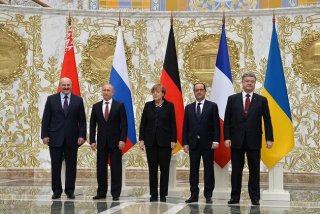 Comparing the “Package of Measures to Ensure the Implementation of the Minsk Accords” to the Protocol Document submitted by the representatives of the Donetsk and Lugansk Peoples Republics, it is readily apparent that the document signed on February 12 is largely based on the rebels’ proposals.

The only omission worth noting is the absence of any mention of ending the military campaign in the East, which is referred to by Kiev as the Anti-Terrorist Operation (ATO). This is understandable, since it is highly unlikely that such a measure could pass in the Ukrainian parliament, where several influential political actors, including Prime Minister Arseny Yatsenyuk, Interior Minister Arsen Avakov, and the former speaker, now head of the National Security and Defense Party, Oleksandr Turchinov, are on record as committed to military victory in Donbass.

The most significant rebel achievement was getting Kiev to recognize a second de facto demarcation of force line, and a withdrawal of forces to the maximum line of separation of forces, which will now be between 70 and 140 kilometers. This concession by Kiev allowed the negotiations to proceed without getting bogged down in disputes over territory which, in any case, are supposed to be resolved by the Law on “Temporary status of local self-administration in certain regions of Donetsk and Luhansk oblast,” commonly referred to as the Law on Special Status.

Yet, it should be noted that the proposals presented by the rebels in their Protocol Document made a number of significant concessions to Kiev at the very outset. Among these:

– No mention of federalism or autonomy. The rebels even used Poroshenko's own term—"deep decentralization"—to define regional self -government.

– No mention of language, cultural, or religious rights;

– Specific dates for the withdrawal of forces, passage of the Law on Special Status, and passage of an amnesty law. These laws have already been passed by the parliament, just not signed into law and implemented;

– The holding of internationally monitored local elections under Ukrainian law , specifically the Law on Special Status;

– OSCE monitoring of border between Ukraine and Russia now under rebel control, after full implementation of the peace plan.

It so happens that language rights, a key issue in this conflict, were added into the notes in the Package of Measures, but they were already mentioned in the Law on Special Status.

Thus, one might say that, while the latest accords follow the blueprint laid out by the rebels, that blueprint was already quite favorable to Kiev. Angela Merkel suggests that this was due, at least in part, to Putin’s pressure on the rebels.

The most vexing issue that now remains is whether the sides are actually willing to withdraw to their respective demarcation lines. Power abhors a vacuum, and, frankly, it is surprising that some sort of external peacekeeping forces were not a part of this agreement. Their absence is clearly a weak point, since the implementation of the original Minks accords broke down almost immediately because of the unwillingness of the parties to disengage.

Second, there is the broader question of President Poroshenko’s ability to deliver on the promised constitutional reforms, which involve decentralization and special status for these regions. In fact, his foreign minister already appears to be walking away from this crucial commitment.

There is intense political infighting within the current parliamentary coalition and, at this point, it is hard to imagine a majority in the Rada agreeing to designate which territories fall within the Law of Special Status, and therefore where local elections under Ukrainian law ought to be held. Point Four of the “Package of Measures,” however, stipulates that this must be done within thirty days, and this will be the first real test of the political feasibility of these accords.

Will this new agreement prove to be the long awaited road map to peace in Ukraine? Past evidence suggests that it will not. The willingness of the conflicting parties—Kiev and Donbass—to reach a settlement is still absent. The key to success lies, first, in placing a peacekeeping buffer force on the ground between the two armies; and second, in the willingness of the members of the Trilateral Contact Group to put direct pressure on their respective constituencies (the EU and United States on Kiev; Russia on Donbass) to abide by the political and economic portions of this agreement.