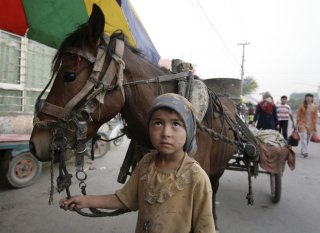 On Tuesday, the UN General Assembly’s 193 member states filled fifteen seats on the UN Human Rights Council (HRC).  China, Russia, Cuba, Pakistan, and Uzbekistan—well-known tribunes of human freedom—were elected following a secret ballot. In the face of this farce, European officials remained silent, apparently indifferent to the corruption of the world’s highest human-rights body. But they still have a chance to make things right.

As the United Nations celebrates its seventy-fifth anniversary later this month, the European Union faces a choice: allow authoritarians to call the shots on human rights in the already-fragile international system, or make a credible stand for human rights and international law. The Human Rights Council ship has already sailed, but Brussels can hope to salvage some modicum of credibility for both the UN and the HRC if it supports establishing an impartial and independent UN mechanism under the HRC to monitor and report on the human rights abuses of the Council’s worst actors.

Although required to do so, too many HRC candidates cannot demonstrate a positive record on human rights. Perhaps the most obvious case is the People’s Republic of China, with its ongoing mass detention, torture, and forced sterilizations of Uyghurs that many claim has reached genocidal proportions. While this is perhaps China’s most flagrant abuse, it hardly overshadows a long and consistent history of extrajudicial killings, press censorship, kidnapping and abuse. Nevertheless, 139 countries supported China in the HRC election.

Indeed, the common thread that joined these otherwise diverse candidates for open slots on the Council is their shady human-rights records. Even in their bids for the Council, some were unintentionally revealing: Russia, for instance, committed to fighting “attempts to use human rights protection as an instrument of political pressure and interference in the internal affairs of States.” This statement was supported by 158 nations.  Pakistan received 169 votes after it asserted that it “attaches high importance to the work of the Human Rights Council,” despite actively blocking all visits to their country by Council experts since 2012.

Only the Kingdom of Saudi Arabia, which, despite the world’s poorest record on women’s rights, professed“[concern] with the promotion and protection of women’s rights and the empowerment of women,” lost a seat, securing just ninety out of minimum ninety-seven required votes, thanks to the efforts of UN Watch.

Created in 2006 to replace the defunct Commission on Human Rights, the HRC is the UN’s primary human rights forum, its forty-seven member states tasked with reviewing and investigating human-rights concerns in all UN member countries. Yet the Council is still plagued by the same issues that hamstrung its predecessor: consistent bias against Israel and political intrigue overwhelming principles, prompting US withdrawal from the body in 2018. China and Russia were naturally thrilled at the American exit, allowing them even more latitude to manipulate the UN for their own agenda. That leaves only the EU and a few Asian and Australasian friends to uphold the HRC’s putative principles.

The EU is no stranger to challenges from authoritarians. Aggressive Russian disinformation on European soil, coupled with efforts to dominate neighboring Belarus and Ukraine are just a couple of examples of Russian revanchist aims. Chinese influence in Europe has also been growing and Beijing poses not only an economic threat, but also a military threat. In response, EU members occasionally issue statements which feature adverbs like “gravely”, “deeply” or, “extremely” to describe their concern, without little action to back it up.

Although the EU failed to organize a coalition of the willing to block all unqualified candidates to the HRC, there is still a chance for the EU can prove its democratic and human rights bona fides. In 2017, Brussels supported the creation of an independent body under the HRC to examine abuses in Myanmar. It can do the same once again for Russia and China, seeking some justice for Russian dissidents like the recently poisoned Alexei Navalny and the much-beleaguered Muslims of Chinese Xingjiang.

The UN was founded seventy-five years ago with the ultimate goal of preventing a new global conflict. Though World War III is not on the horizon, there is no doubt that the institution’s existence is under a different sort of threat if a revanchist Russia and a totalitarian China set the standard for the body’s human rights. The EU can stand for the world it wants, if only it would choose to do so, sooner rather than later.

Ivana Stradner is the Jeane Kirkpatrick Fellow at the American Enterprise Institute.