Welcome to the Era of Wars Without an End 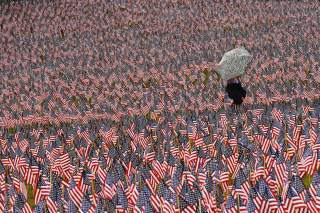 Kurdish forces seized control of the Syrian town of Kobani in January 2015 after a four-month battle with Islamic State fighters. Footage of their triumph was relayed around the world. A global audience witnessed Kurdish troops indulge in raucous celebrations as they raised their flag on the hill that once flew the IS black banner.

And so it came as something of a shock when, in October 2019, President Donald Trump granted Turkey carte blanche to seize territory held by the Kurds. Consequently, what once appeared an emphatic victory for the Kurds has since descended into yet another dismal defeat.

This is not an unusual tale. Victories have also been proclaimed in the recent wars in Iraq, Afghanistan and Libya, only for violence to continue unabated.

The spectre of these apparently endless wars gives us cause to consider whether the notion of “victory” has any purchase or meaning in respect of contemporary warfare. Having spent the best part of the last decade thinking about this very question, I have come to believe that the idea of victory in modern war is nothing more than a myth, albeit an enduringly dangerous one.

As I argue in my new book, it’s high time for us to think again, and more deeply than we have done before, about what victory in war means today.

The view from Washington

The three most recent occupants of the White House offer very different views on the issue of victory. President Trump has made it both the cornerstone of his rhetoric and the lodestar of US foreign and security policy. “You’re going to be so proud of your country,” he assured the audience at a campaign rally in 2016:

Victory also loomed large in President George W. Bush’s statements on world politics. Delivering a keynote speech on the Iraq War in 2005, for example, Bush used the word “victory” 15 times while standing in front of a sign that read “Plan for Victory” and pitching a document entitled “Our National Strategy for Victory in Iraq”.

Sandwiched between Presidents Bush and Trump, President Barack Obama took a very different view. Convinced that the idiom of victory was a retrograde way to talk about how modern wars end, he sought to excise it from US strategic discourse. The term “victory” is unhelpful, he explained, because it evokes crude associations with conquest and triumphalism.

The disagreement between Trump and Bush on the one hand, and Obama on the other, runs deeper than a mere difference in rhetorical style (or lack thereof). It reflects profound uncertainties about the appropriateness of the language of victory to modern war.

This article is part of Conversation Insights
The Insights team generates long-form journalism derived from interdisciplinary research. The team is working with academics from different backgrounds who have been engaged in projects aimed at tackling societal and scientific challenges.

Since the early 20th century, the view has emerged that, when it comes to the mechanised mass slaughter of modern warfare, nobody wins. As Aristide Briand — prime minister of France for periods either side of the first world war — put it: “In modern war there is no victor. Defeat reaches out its heavy hand to the uttermost corners of the Earth and lays its burdens on victor and vanquished alike.”

Bao Ninh, a veteran of the North Vietnamese Army and the author of one of the most moving war novels of the 20th century, The Sorrow of War, made much the same argument, but in simpler terms: “In war, no one wins or loses. There is only destruction.”

Irrespective of whatever Presidents Bush and Trump might believe, it is certainly tempting to say that there can be no such thing as victory in modern war. It is easy to believe that war is so ghastly and so destructive that it can never result in anything that could reasonably be called a victory. Any successes achieved on the battlefield, it might be argued are likely to be both so tenuous and bought at such a bloody cost that the mere idea of calling them “victories” appears ironic.

But this can only be part of the story. It is too glib to declare victory in modern war an untenable proposition on the grounds that it can only be purchased at a terrible cost in human lives and suffering. The value of a victory may be diminished by a steep price tag, but not entirely negated by it.

For instance, while the second world war produced a truly barbaric body count, and boasts the cold war among its legacies, it also halted Nazism in its tracks. This, it goes without saying, must count for something. More recently, while the 1991 Gulf war arguably created more problems than it solved, it also successfully reversed Iraqi aggression in Kuwait.

My point here is a simple one: although victory can be hideously costly in modern war, and it invariably accomplishes far less than it is intended to achieve, it is not an entirely vacuous concept.

This brings us to the first of three twists in our tale. What is out of date here is not actually the general concept of victory itself, but the notion that victory is the product of decisive battles. The nature of modern warfare is not conducive to clear cut endings. Instead of yielding an emphatic victory for one side and, conversely, an incontrovertible defeat for the other, modern armed conflicts are prone to descend into protracted, drawn out endgames.

So it can sometimes be difficult to discern not only which side has won a given war but whether that war can even be deemed over in the first place. The words of Phil Klay, a writer who served in Iraq several years after President Bush had already declared “mission accomplished”, captured something of this confusion:

Success was a matter of perspective. In Iraq it had to be. There was no Omaha Beach, no Vicksburg Campaign, not even an Alamo to signal a clear defeat. The closest we’d come were those toppled Saddam statues, but that was years ago.

What this suggests is that victories no longer assume the form that they are expected to assume or that they had assumed in the past. If victory has historically been associated with the defeat of the adversary in a climactic pitched battle, this vision is now a relic from a bygone era. This is not how wars end in the 21st century.

Was victory ever really alive?

There is, then, plenty of evidence to support the view that, when it is spoken about in terms of decisiveness achieved through success in pitched battle, victory has little relevance to contemporary armed conflict.

But this is where we encounter the second twist in our tale. Some scholars claim that the vision of victory associated with decisive battle did not suddenly become problematic with the advent of the “war on terror”, nor even with the birth of modern warfare. Rather, they argue, it has always been problematic.

The historian Russell F. Weigley is the leading proponent of this view. He contends that the idea of decisive victory through battle is a romantic trope left over from the only time in history when wars were routinely decided by a single clash of arms: the long century bookended by the battles of Breitenfeld (1631) and Waterloo (1815).

Spectacular but also unique to this period of history, the set-piece battles of this era, Weigley argues, have had a distorting effect upon how war has been understood ever since. The pomp and drama of these clashes was such that they captured the imagination of military historians and the general public alike. Ignoring the fact that that attrition, raiding, and siege craft, rather than grand battles, have historically been the principal means by which wars have been waged, historians (and their readers) have been culpable of buying into (and perpetuating) a kind of Hollywood vision of war that mistakes an exception to the norm.

This excessively battle-centric understanding of warfare has taken root in the popular imagination. Most contemporary representations of war – in literature, media, art and film – envision it as a sequence of battles leading up to and culminating in a decisive set-piece clash of the kind that the 2015 footage from Kobani ostensibly captured. This reflects a distortion of the historical record. In actual fact, very few wars down the centuries have pivoted on battles. Most have hinged on harrying, manoeuvring and the denial of access to vital resources. So far as we fail to see this, a proclivity to “boy’s own history” is to blame.