What to Do about Racial Disparities? 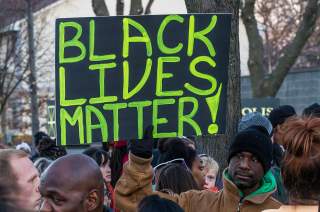 The first thing to say about race relations in the United States in 2016 is that, if we take the long view and keep things in perspective, they are really not that bad.  No slaves, no Jim Crow, a black president, a Martin Luther King Day federal holiday, and on and on. It may sound Pollyannaish to say so given the recent unrest on the streets and on campuses, but it’s true.

Another point to be kept in mind has to be stated delicately, but it does have to be stated:  Race relations is about African Americans. We wouldn’t be having a national conversation on race otherwise.

With all that in mind, let’s start out by asking the basic question, which is, “Where is it we want to end up?” That is, to figure out what we need to do, we have to ask what it is we would like our country to look like.

The answer is not that complicated. We’d like to have no institutionalized discrimination, of course; and as little individual discrimination as possible, too; and it would be a good thing, as well, if there were not dramatic racial disparities. More on how important the latter is in a moment.

So, how are we doing?

Well, the claims of the Left and Hillary Clinton to the contrary notwithstanding, we really don’t have any institutionalized discrimination – except, ironically and importantly, of the politically correct type. Indeed, our laws ban racial discrimination in just about every public transaction you can think of – employment, education, contracting, voting, you name it – with dubious exceptions for “affirmative action.”

As for individual discrimination, it is socially unacceptable to be a bigot, and there is less and less bigotry. There are certainly individual bigots – of all colors – and some of them are in positions of authority. There are bigoted policemen and bigoted employers. But they are outlaws, and outliers. The number-crunching has shown that there is no police war on young unarmed black men, most companies aggressively celebrate diversity, our most selective schools uniformly seek out “underrepresented” minorities, and so on.

The notion of “implicit bias” is, again contrary to the claims of the Left and Hillary Clinton, scientifically disputed and, in any event, unlikely to translate into systematic differences in actual treatment, which is as a general matter both consciously avoided and legally dangerous.

The problem, then, is racial disparities, in things like crime, employment, and education. So what is to blame for it, and what do we do about it?

Before answering this question, there is an important caveat: It is both unrealistic and dangerous to think we can eliminate all racial disparities. Different groups have different priorities and different interests. It’s also true that they bring with them different histories and cultures. And more on that now.

The possible reasons for racial disparities might be divided into these categories: ongoing discrimination, continuing effects of past discrimination, selection criteria that are not discriminatorily motivated but have racial effects (“disparate impact”) and disputed utility, and cultural variations.

It can’t really be disputed that all of these things exist to some degree, but there is a lot of disagreement about how much of each there is, both absolutely and in comparison to the others, and what to do about them.

But consider: Even as we struggle with deciding, as an empirical matter, how much of each there is, there ought to be plenty of common ground on what to do, and what not to do, about each.

For example, when it comes to ongoing discrimination, liberals and conservatives should both agree that enforcing existing laws against it should be a priority. And isn’t it clear that, in an increasingly multiracial and multiethnic society, all groups should be protected from discrimination?

When it comes to the continuing effects of past discrimination, we ought to be able to agree that those effects are diminishing with every tick of the clock. And can’t we agree that, in all events, it is a mistake to use race as a proxy for disadvantage since there are disadvantaged people of all colors – as well as advantaged people of all colors? The president himself said as much, when he noted that “white kids who have been disadvantaged and been brought up in poverty” would be more deserving of a leg up in university admissions than his own “pretty advantaged” daughters.

Conservatives believe that the costs of the “disparate impact” approach to civil-rights enforcement overwhelm any conceivable benefits. Liberals disagree, but they should concede –as Anthony Kennedy and the four liberal Supreme Court justices did in a pro-disparate-impact decision last year – that there need to be serious constraints on its use because of those costs.

And, finally, there is also a growing recognition that cultural problems – and, in particular, out-of-wedlock birthrates – are an important underlying cause of many social disparities, both within and between different racial and ethnic groups. Conservatives like me may believe that this is the reason for the racial disparities that still so stubbornly exist, and liberals may deny that, but if we’re agreed that they are at least a significant problem, then shouldn’t we recognize that, talk about it, criticize it, and spend some time coming up with programs to discourage it – and avoiding policies that incentivize it?

Roger Clegg is president and general counsel of the Center for Equal Opportunity.