What North Korea Calls the U.S. “Hostile Policy” Could Mean Anything 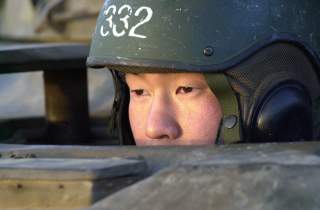 Washington, DC has yet to decide on its policy toward Pyongyang. The Trump administration launched an internal-policy review only a few weeks ago, so that decision could take some time. Against the current backdrop of swirling uncertainty, an increasing number of scholars and analysts are actively discussing ways for the United States to deal with a more dangerous, nuclear-capable North Korea. As if the Kim regime wanted to demonstrate such “credentials” at the right time, it blatantly test-fired a solid-fuel-powered medium-range missile called the Pukguksong-2 this past Sunday. Although some (could be more now) are calling for the use of force (i.e., a preemptive strike) to get rid of North Korea’s known nuclear and missile facilities, there seems to be a general consensus that diplomatic engagement is necessary at this point.

It seems like two “schools” are gradually being formed among those who support the use of diplomacy. One of the two schools, which includes Doug Bandow, senior fellow at the Cato Institute, and Amitai Etzioni, professor of international relations at the George Washington University, strongly favors the nonmainstream idea of striking a serious deal with Beijing. In such a scenario, the United States, along with South Korea, would make tangible geopolitical concessions in return for China’s strict enforcement of the U.N. sanctions that are currently imposed on North Korea. The key, according to this particular school, would be allaying Chinese fear of a sudden North Korean collapse because Beijing fears a unified Korea allied with the United States more than a nuclear-armed Pyongyang right on its doorstep.

The second school, on the other hand, is more mainstream, at least for now, and focuses on the idea of talking directly to North Korea. Its supporters, which include some prominent figures such as Joel Wit, senior fellow at the U.S.-Korea Institute at Johns Hopkins School of Advanced International Studies, and James Person, coordinator of the North Korea International Documentation Project, urge Washington to stick to the formula of securing a nuclear freeze as a stepping stone first, and then moving toward complete denuclearization. The underlying logic is that only Washington can fully address Pyongyang’s insecurities because the United States, in the eyes of the North Koreans, is the country that poses an existential threat. In fact, North Korea often cites the U.S. “hostile policy” as justification for its nuclear pursuit.

If the Trump administration plans to formulate its North Korea policy on the basis of diplomatic engagement, then champions of the second school will surely look more realistic and attractive—particularly in the face of an intensifying U.S.-China rivalry. President Donald Trump’s hard-line stance on China has been quite conspicuous since the election in November. Nonetheless, if and when the time comes around for Washington to seriously mull over the option of talking to Pyongyang, it must recognize that the second school has one major, but subtle, shortcoming: shortsightedness.

Many of those in the second school concur that the United States has to hammer out a freeze agreement with North Korea in the near term. In this regard, proponents point out that Washington should persuade Pyongyang with the offer to downsize or suspend future joint U.S. military exercises with Seoul. At the same time, they argue that the United States, in the longer term, should induce the Kim regime to move toward denuclearization by genuinely offering to negotiate and sign a peace treaty as well as normalize bilateral relations. Unfortunately, their push for these initiatives are solely based on the wrong assumption that joint military exercises and the absence of a permanent peace treaty, along with diplomatic recognition, are the fixed pillars of what North Korea calls the U.S. “hostile policy.” In other words, they are overlooking the fact that the components of the U.S. “hostile policy” could be adjusted according to Pyongyang’s own needs, especially over time.

Comparing the North Korean Foreign Ministry’s memorandum of August 31, 2012, with that of November 22, 2016, could provide some guidance. In these two memorandums, the U.S.–South Korea joint military exercises and the U.S.-led economic sanctions are both described as being part of the U.S. “hostile policy.” Given their consistency, what this suggests is that North Korea would most likely demand, at a minimum, partial-to-complete sanctions relief alongside the suspension—if not the end—of joint military exercises before agreeing to a nuclear freeze. However, there are more differences than similarities. The 2012 memorandum expands the scope of the U.S. “hostile policy” by including U.S. interference in North Korea’s “sovereign right for peaceful use of the outer space” and the U.S. rebalance to Asia. Neither of them are mentioned in the 2016 memorandum. Instead, Washington’s so-called reckless and incessant defamation of the dignity of the Kim regime gets named as the U.S. “hostile policy.” (Thus, it wouldn’t be surprising if North Korea, as part of a freeze agreement, demands that the United States to tone down its public criticisms.) One obvious pattern can be found here: whatever Pyongyang perceives to be the most salient “threats” to its own security at a given time or time period quickly becomes part of the U.S. “hostile policy.” In 2012, the “leap day” agreement fell apart following the North’s satellite launch, and “rebalance” became the new buzzword within the United States’ foreign-policy establishment. Moreover, from 2012 to 2016, the Obama administration actively denounced North Korea for its unnecessary provocations and egregious human-rights violations.

Simply put, counting just on the “joint military drills” card to bring about a freeze agreement with Pyongyang in the short term is naïve. What’s even more naïve is, in fact, believing that the North Korea nuclear problem could be solved somehow in the longer term with the “peace treaty” and “diplomatic recognition” cards. At this point, it’s almost impossible to anticipate what sort of things the Kim regime would demand over time, especially after it agrees to halt its nuclear activities. Depending on how North Korea assesses its security environment at that time, its demands could vary. The North Korean Foreign Ministry could release more lengthy memorandums specifying the existence of the Washington-Seoul alliance and the presence of American troops in South Korea as the U.S. “hostile policy.” More importantly, it seems like the extent of what Pyongyang refers to as “nuclear threats” in the abovementioned memorandums is limited to the United States’ show of force (i.e., deploying nuclear bombers and carriers to the South) for now. Nevertheless, it shouldn’t be taken at face value because the extent could be easily stretched, at some point, to cover Washington’s nuclear umbrella, also known as extended deterrence, over South Korea.

If the Trump administration decides to approach North Korea diplomatically after conducting an internal policy review, negotiating for a nuclear freeze should be the first priority, because successfully doing so perhaps could provide just enough momentum to move toward a nonnuclear Korean Peninsula. What that means is that the United States must craft a flexible strategy that has at its core a sound understanding of North Korea’s “evolving” security concerns. As I have argued elsewhere, such understanding could be enhanced through active Track II dialogues with Pyongyang. Unfortunately, there is no magical formula for denuclearizing North Korea. The Trump administration, at the end of the day, might have no choice but to strike some kind of a deal with China.

Yu Bin Kim is an assistant professor at the Republic of Korea Naval Academy. He holds a M.A. degree in East Asian Studies from Stanford University. His main research interest is China-North Korea relations. You can follow him on Twitter: @Yubs89.