This Is What Russia's Enemies in Syria Should Fear: The Su-24 Fencer 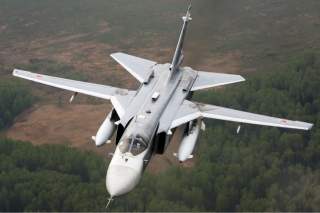 While the four Russian Su-34 Fullback bombers deployed to Syria are eye-catching, most of  the Russian air force’s long-range striking power in the region comes courtesy of the venerable Su-24M2 Fencer. Russia has deployed twelve of the distinctive twin-engine, variable geometry wing jets to its base in Latakia.

While the Fencer is an aged design that can trace its inception to the 1960s, Russia’s remaining fleet of Su-24s has been heavily upgraded with modern systems. The current version of the Fencer is equipped with GLONASS satellite navigation systems, an upgraded glass cockpit, a modern head-up display and an upgraded air-to-air self-defense capability with the addition of R-73 high off-boresight missiles.

The jet has also been provisioned to carry a wider range of precision-guided munitions. But while the Russian jet can be equipped with precision-guided weapons, according to U.S. Air Force officials—Russian forces don’t appear to be using such weapons. Instead the Russians appear to be mostly using unguided munitions according to Pentagon officials. Indeed, U.S. Air Force officials have gone on the recording saying so. “Those aren’t precision weapons,” U.S. Air Force intelligence chief Lt. Gen. Robert Otto told reporters on Thursday as quoted by TIME. “We can tell what’s hanging off the airplane.”

The Fencer can carry a maximum of 17,600lbs of ordnance, but usually carries only 6,600lbs in most configurations according to Sukhoi. The aircraft, which was designed to penetrate enemy airspace at low altitude, can hit targets as far as 400 miles away without aerial refueling while carrying six 1,100lbs FAB-500M-62 bombs (the plane does has aerial refueling capability). Nonetheless, the Fencers are likely flying more than just strike missions. The aircraft are probably being used for reconnaissance and other support missions, according to U.S. Navy officials.

With twelve aircraft available to them, the Russian air force should have between eight and ten Fencers available to them at any given time. If these Russians have surged enough resources to Latakia, the ten Su-24 could generate thirty sorties per day in a best-case scenario. But there are important unanswered questions—we don’t know how many pilots and maintenance crews the Russian forces brought with them. Moreover, many U.S. Air Force and Navy officials doubt that Russia brought enough support equipment with them. “It's unlikely that they have brought the support equipment with them that we do on our TSPs [theatre security packages], “ one Air Force official said. “It certainly isn't already in place in Latakia.”

The Russian air force will eventually replace aircraft with the Su-34, but the Fencer will remain in service for some time to come. It still offers the Russian forces in Syria a decent long-range strike capability against targets that are further away from Latakia.