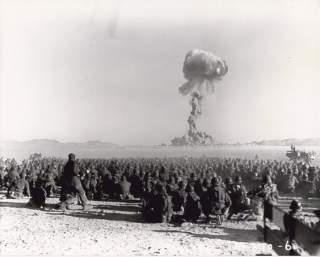 Anyone who flies into Las Vegas for a layover or whatever else can’t help noticing the Martian-like landscape to the north of the desert metropolis. The mountains and dry lake beds look like a place so remote and desolate that testing nuclear weapons there could seem reasonable.

But because nuclear weapons are inherently unreasonable, Americans refused to allow their testing within the continental United States until Cold War tensions forced the issue. Between the first atomic explosion and the Berlin Airlift, almost no one in America’s new nuclear-weapons establishment thought a continental test site was a good idea.

The Marshall Islanders, whose remote Pacific atolls were chosen instead, came to agree with mainland Americans, but wound up with little say in the matter. But the people of Bikini and Enewetak Atolls weren’t the first locals to be hustled off the bomb fields.

The very first nuclear explosion—the Trinity shot on April 1945—made full use of its location’s undesirability. Remote, barren, sparsely inhabited, and yet within driving distance of the Los Alamos weapons lab, the north end of the Army Air Force’s Alamogordo Bombing Range in southern New Mexico seemed the best site available.

But nobody really grasped the immense power of the new weapon, and what seemed like a generous safety zone disappeared in the stem and cap of a huge mushroom-shaped cloud created by terrifying light and noise one early desert morning. With exquisite precision and timing, a priceless sphere of metal changed a fraction of its substance into cosmic fire.

The Trinity blast, equal to that of twenty-one thousand tons of TNT chemical explosive, was considerably more powerful than the bombs used in combat against Japan that summer. The highly radioactive fallout sprinkling down from the mushroom cloud contaminated several ranch families and their livestock, seriously worrying Manhattan Project officials (and the ranchers).

The Project’s chief medical officer Stafford Warren warned the Alamogordo site “was too small for a repetition of a similar test of this magnitude except under very special conditions.” The logistical and military difficulties of operations in the Pacific islands, if expensive and time-consuming, were well understood and mastered during the war.

Within a year of the war’s end in September 1945, plans were underway for new tests of the new weapon, this time focusing on naval effects. 1946’s Operation Crossroads tested two plutonium-powered implosion bombs identical to the “Fat Man” weapon dropped on Nagasaki; yields were in the twenty-kiloton (equivalent to twenty thousand tons of TNT) range.

In 1947 the United States’ atomic arsenal stood at just thirteen bombs, and the Manhattan Project’s bomb-fuel plants, now run by the new Atomic Energy Commission, could only make so much. New designs promised greater efficiency but now, as the Iron Curtain fell across central Europe and the Berlin Crisis escalated, the complications of Pacific testing ballooned.

However, the project task force sailed under near-wartime conditions, due to the international situation. With communist coups in Eastern Europe and Soviet tanks facing Berlin, the nearly forty ships and eleven thousand personnel aboard Joint Task Force 7 received air cover, destroyer escorts and submarine sweeps during their voyage to Enewetak Atoll.

The cost was enormous; more dangerous was the need to put most of the nation’s fissile stockpile and nuclear weapons scientists out in the middle of the ocean, where a Soviet sub could wipe them out. The unidentified subs chased by JTF7’s destroyers didn’t reassure anyone.

Despite Operation Sandstone’s success, the Atomic Energy Commission quietly undertook a secret study of continental nuclear testing sites, as a “just-in-case” matter. Navy Capt. Howard Hutchinson, a meteorologist with the Armed Forces Special Weapons Project, the outfit comprising the military remnant of the Manhattan Project, looked at a number of stateside locations—some of them surprising.

Although the desert Southwest remained the most promising due to its vastness and low population, Cape Hatteras, North Carolina, offered a rural location where prevailing winds would carry fallout out to sea. Even in the 1940s, this had . . . drawbacks, and Capt. Hutchinson concluded that the cost of land and affected population were too high.

Alaskan sites shared many drawbacks with Pacific island sites, while Gulf Coast sites were no less crowded than Cape Hatteras. In the end, they selected the Las Vegas Bombing and Gunnery Range, a huge swath of desert and mountains close enough to Sin City and the nuclear weapons labs but far enough away from everything else.

Project Nutmeg, as the secret study got called, might have sat on a shelf after March 1949 but for the outbreak of the Korean War. Tests necessary for the proposed hydrogen or “Super” bomb were ready, but the Pentagon had little to spare for weapons-test support as it scrambled to cover Korea.

Operation Greenhouse, a five-shot test series on Enewetak Atoll in spring 1951, again relied on a large joint task force and thousands of personnel, this time as part of an ongoing trans-Pacific wartime logistics program. The Greenhouse shots tested important new concepts involving nuclear fusion that would lead to compact nuclear weapons and multi-megaton hydrogen bombs. Shot George—at 225 kilotons—was so powerful that it wouldn’t ever have been set off stateside.

But professional and public opinion turned in the face of Korea. and security seemed paramount. whether in secret test sites or huge arsenals. Even as fighting continued to rage through the Korean winter of 1951. the new Nevada Test Site warmed up with the blasts from Operation Ranger.

Ranger’s five shots—all air drops of Mark-4 “Fat Man”–type bombs from a B-50 bomber—were formally requested by Los Alamos on December 11, 1950, approved by President Truman a month later, started on January 27 and finished a week later. The new continental test site got off with a bang, but there was a war on.

Despite the haste, Ranger managed to include a number of weapons-effects experiments, including “Operation Hot-Rod,” a rough-and-ready look at how much protection an automobile could provide from nuclear attack (not very much). The bright predawn flashes and deep rumbles soon became familiar to residents of Las Vegas and Los Angeles during the following decade.

Eventually, public tolerance for atmospheric testing dropped even as nuclear arsenals grew, and the tests went underground for a generation before mostly ending altogether. The only nation currently conducting nuclear tests is fortunately limited by geography in the size of the tests it can conduct. Not even the Young Leader wants earthquakes or fallout, and the odds of oversea tests are nil.