Who Would Win? The Navy's Zumwalt-Class Destroyers vs. North Korea? 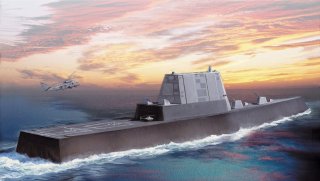 Here's What You Need to Remember: These new high-tech destroyers are overengineered. They might have some advantages, but they aren't the finest ships ever made.

The USS Michael Monsoor, second of the Zumwalt-class destroyers, has now taken to the highseas. While neither the Monsoor nor its older sister Zumwalt are likely to be ready to contribute to a war on the Korean Peninsula in the near future, the crisis show no signs of abating. As tensions between the United States and North Korea grow, it’s worth asking what role the largest, most lethal destroyers in the U.S. arsenal might play in the conflict.

Robert Farley, a frequent contributor to TNI, is author of The Battleship Book. He serves as a Senior Lecturer at the Patterson School of Diplomacy and International Commerce at the University of Kentucky. His work includes military doctrine, national security, and maritime affairs. He blogs at Lawyers, Guns and Money and Information Dissemination and The Diplomat. This first appeared in 2017 and is being reposted due to reader interest.