Why Sudan's Future Seems Brighter Than Ever 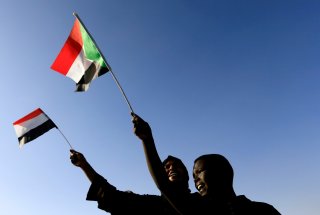 The past month’s normalization of relations between Israel and both the United Arab Emirates and Bahrain are the first peace deals between Israel and any Arab country in almost thirty years. They were immediately heralded as major steps forward for peace and stability throughout the Middle East, and in the days that followed, rumors spread that a deal with Sudan might be next

In 2019, massive changes swept through the country; following a series of protests, a group of military officers overthrew Sudan’s longtime dictator Omar al-Bashir and replaced him with a transitional government. Atypically, the coup’s plotters reached out to protest leaders and brought them into the government, with the eventual goal of fully democratic elections in 2022. Given this, Secretary of State Mike Pompeo hoped that Sudan would be willing to break from the past with Israel. To this end, he visited Khartoum, Sudan’s capital and the location of the infamous 1967 conference where the policy of “three nos”—no peace with Israel, no recognition of Israel, no negotiations with Israel—was established.

Pompeo was rebuffed. Sudanese prime minister Abdalla Hamdok informed the secretary of state that the Sudanese government had “no mandate” to make such a move before elections took place. Despite this, the one-year-old government of Sudan has shown a clear willingness to make large moves on its internal affairs. At the same time Israel’s two peace deals dominate world headlines, Sudan quietly made two of its own, with rebel groups in the country’s tumultuous western Darfur region.

Darfur—“Land of the Fur” in Arabic—is a set of three provinces in western Sudan inhabited by the Fur, a non-Arab ethnic group. In 2003, following decades of state-sanctioned discrimination against the region’s non-Arab tribes, they began an insurgency that decisively defeated the Sudanese Army. In response, then President al-Bashir began to train and arm local Arab militias—the infamous “Janjaweed”—who became known for widespread atrocities targeting Fur villages, a campaign that then-Secretary of State Colin Powell described as a “genocide.” Although its worst horrors subsided as conflicts elsewhere in the region intensified, a low-level war has continued up to the present.

The first of Sudan’s two new agreements will, in principle, end this war. The agreement, concluded in Juba, South Sudan, on August 31, was conducted between the Sudanese transitional government and the Sudan Revolutionary Front (SRF), a broad alliance of smaller rebel groups. As part of the settlement, the rebels agreed to renounce violence and participate in civil politics, and the transitional government allotted them a significant fraction of parliament seats. Two rebel commanders refused to participate in the Juba negotiations, but both agreed to a ceasefire. For the time being, at least, the seventeen-year conflict seems to be over.

The second deal, inked three days later in Addis Ababa, Ethiopia, did something possibly even more remarkable. Conducted between the government and Abdelaziz al-Hilu, one of the commanders who boycotted the Juba Agreement, the second deal mostly resembles the first. However, it included one major addition—it formally committed Sudan to secular government, separating Islam from political practice.

This is a sea change for Sudan, which has a long and colorful history of mixing religion and politics. In 1881, a tribal leader proclaimed himself the Mahdi, the prophesied redeemer of Islam, and drove British and Egyptian forces from the desert; his followers kept them at bay for nearly twenty years. Though the country became independent along secular lines in 1956, its longtime president Gaafar Nimeiry implemented shari’a law in 1983, and when he was overthrown in a military coup two years later, the new administration kept it. Sudanese fundamentalism reached its apex in 1989, when Omar al-Bashir came to power and turned Sudan into one of the most puritanical countries on Earth. Al-Bashir also supported jihadist organizations and hosted Osama bin Laden, earning the ire of the United States and, in 1993, a place on its State Sponsors of Terror list. Moreover, state fundamentalism helped to cause a devastating war with the predominantly Christian south, which secured its independence from the north in 2011. Though Sudan’s Islamism was significantly scaled back by 1996, and bin Laden departed to Afghanistan, controversies still periodically erupted thereafter. In one widely publicized 2007 incident, a British schoolteacher named her class’ teddy bear “Muhammad” and was subsequently convicted of religious hatred. The teacher was released after a week and returned to Britain, but not before ten thousand Sudanese marched through Khartoum demanding her execution. The Muslim Council of Britain said it was “appalled” by the incident.

Two previous peace agreements have been negotiated in Darfur, one in 2006 and the other in 2011; both deals eventually fell apart. But the third time might be the charm. President al-Bashir, long an opponent of reform, has been imprisoned, and his political party dissolved. The transitional government has stated publicly that it will to take the country in a different direction, and it has taken several actions that reflect this trend; it outlawed female genital mutilation, removed the death penalty for apostasy, and forbade the execution of minors, earning it plaudits from human-rights observers. The past month’s commitment to secularism at the national level and forbidding religious discrimination is another welcome step. A further step, as Pompeo observed, would be to negotiate an end to the ongoing conflict with Israel, as the UAE and Bahrain have done. A stable relationship with Israel could benefit Sudan greatly; Israel could serve as a trade partner, a customer for Sudanese oil, and perhaps a source of aid for natural disasters such as the floods currently ravaging the country. Although the transitional government refused Pompeo, they do not seem to have done so out of reflexive adherence to the Khartoum Resolution, and their refusal left open the possibility of a future agreement.

When the Arab Spring began in 2011, President al-Bashir was firmly in control of his country, the authorities cared little for human rights, and the Darfur war continued. Today, the new government has embarked on a course of democratic and secular reform, human rights abuses are being curtailed, and a crucial step has been taken towards ending the war. To continue the metaphor of seasons, Sudan is in autumn. The international community should take whatever actions are necessary to ensure that it does not slip into winter.