Why the Australia-Japan Submarine Deal Needs to Go Through 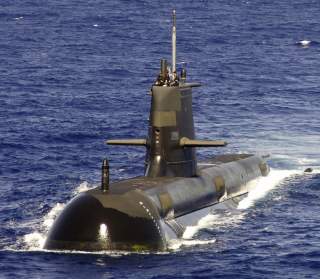 Recently, the drive in Canberra and Tokyo towards a new submarine deal has met with some bumps. Since last July, Australian Prime Minister Tony Abbott and Japanese Prime Minister Shinzo Abe were expected to sign the $20 billion landmark submarine deal to replace Australia's Collins Class boats in the mid 2020s.

In January 2015, the Japanese media informed the public that the Ministry of Defense (MOD) had proposed the joint development and production of submarines with Australia. However, there has been recent flux in policymaking on the issue, the result of Abbott’s abrupt introduction of a new “competitive evaluation process,” which would be used to determine the winning bidder of a new submarine contract.

One reason for the sudden uncertainty was the domestic pressure Abbott received at home amid concerns that the contract would result in job losses for the Australian Submarine Corporation (ASC) located in South Australia. To alleviate concerns, Abbott reassured the public that “under any possible scenario, there would be submarine work in Adelaide” and “there is a long, bright future for the ASC.” Similarly, Australian Defense Minister Kevin Andrews argued that the government expected that significant work would be undertaken in Australia, “including combat system integration, design assurance and land-based testing.” According to the minister, “[it would] result in the creation of at least five hundred new high-skill jobs in Australia, the majority of which will be based in South Australia.”

On February 20 2015, Defense Minister Andrews released the details of the new “competitive evaluation process.” The media release identifies the Future Submarine Program (FSP) as the largest defense procurement program in Australian history. It represents an investment of $50 billion in Australian security, which will be subject to adjustment according to the evaluation process.

Officially, France, Germany and Japan are in the running to be Australia’s partner for the FSP. The three countries will be asked to submit designs that satisfy Australia’s requirements; suggest options for construction in Australia, overseas or both; provide cost estimates; and explain their respective stances on key issues such as intellectual property. Nevertheless, Tokyo previously mentioned its lack of enthusiasm towards the idea of a tender. While it would seem petty to quibble over semantics given the opaqueness of Abbott’s “competitive evaluation process,” the rhetoric clearly seeks to assuage concerns in Tokyo.

Much of the debate has revolved around the question of whether the submarines ought to be built locally or overseas. There has been strong advocacy inside Australia for the subs to be built locally. Figures like Rear Admiral Peter Briggs have argued that coordination would be smoother if the subs are built in Australia. He offers a valid point that a submarine built in Australia would be supported throughout its life there while construction abroad would present complications due to different standards, practices and existing language barriers. Briggs points to the Coles Review, a study that highlights the importance of Australia having full access to the technologies and intellectual property underpinning the future submarine.

Nonetheless, Tony Abbott’s policy flip flop was a mistake. The prime minister needs to push through the deal with Japan because there is simply too much to lose on both sides. While it is important to have the submarines built locally, this can be negotiated with Japan. Indeed, it is encouraging that there have been recent reports that Tokyo is willing to partner with the ASC. While Australia has the infrastructure to produce submarines, it is undisputed that it needs international assistance. Hans Ohff, the former Managing Director of ASC from 1993 to 2002, affirmed this when stating that “when we built the Collins Class, we had the Swedes to provide the principal design, the procurement, and the construction so of course we need overseas capability in order to assist us.”

Amidst the debate, it must be reiterated that Australia has much to gain from striking a deal with Japan. It is unprecedented that Tokyo is willing to share sensitive military technology. The fact that Abe took the initiative to consider the transfer of submarine technology to Australia despite opposition from the MOD serves to emphasize the importance of Canberra as a security partner.

Furthermore, Abbott cannot afford to lose momentum in furthering Australia-Japan ties because he needs to advance his agenda of engaging the Asia-Pacific and bolstering Australia’s tentative trilateral partnership with Tokyo and Washington. Typically identified as belonging to the Western camp, Australia and Japan have both struggled to establish themselves as members of the regional Asia-Pacific community. Japan has consistently supported Australia, from at least 2002, when Prime Minister Koizumi tried to convince ASEAN leaders that Australia’s inclusion was imperative. It is time for Australia to return the favor.

Australia ought to respond favorably to the changes that Japan is undertaking in its defense policy. Last year, Abe adopted the “Three Principles on Transfer of Defense Equipment and Technology,” which would permit the conditional export of Japanese weapons. On this basis, Japan has already concluded two major deals. It has agreed to supply surface-to-air missile parts to the United States and will pursue joint research on air-to-air missiles with the United Kingdom.

The submarine deal with Australia is another imperative step to Abe’s broader vision of strengthening defense cooperation with like-minded countries in the region. The implications of Japan’s defense reforms cannot be underestimated. In 2007, in the process of negotiating their Joint Declaration on Security Cooperation, Japan and Australia did not conclude an alliance treaty because of the constraints pertaining to Japan’s constitution. As Abe takes concrete steps to unwind these constraints, there is wider space for Canberra and Tokyo to redefine their strategic relationship. Nevertheless, it will require a deep dive.

Jema Samonte is currently interning at the Center for the National Interest.