Geoffrey Kabaservice, Rule and Ruin: The Downfall of Moderation and the Destruction of the Republican Party, From Eisenhower to the Tea Party (New York: Oxford University Press, 2012), 504 pp., $29.95. FIRST, A few of the players: On one side of the great divide within the Republican Party of the 1960s and 1970s, as author Geoffrey Kabaservice tells it, were the “moderates,” many of them cut from the same expensive cloth, waspishly good-looking and well-mannered. There was William Scranton, “slim and handsome, and projecting a Kennedyesque image of charm, cool, urbanity, and elegance.” Add men such as Nelson Rockefeller and George Romney. And there was John Lindsay, “one of the best-looking politicians ever to mount the hustings: six feet three inches tall, with chiseled features, blue eyes, and wavy blond hair.” Leave aside one critic’s observation that there seemed to be nothing at all behind those China-blue eyes. These were the good guys.

On the other side were the conservatives, among them Barry Goldwater, William F. Buckley Jr. (although the author does frequently attempt to enlist Buckley on the good-guy side), William Rusher, Clif White and George Gilder, who left the good guys for the bad. And, of course, there’s Richard Nixon, whose occasional forays into liberal territory, says Kabaservice (in a chapter called “Darkness Drops”), “reflected pragmatism, opportunism, or even cynicism.” These were the bad guys.

The good guys lost; the bad guys won. That’s the story Kabaservice sets out to tell in Rule and Ruin. He tells it in strong and engaging prose, often with a literary flair. And it’s that flair, combined with an exceptional mastery of detail and an unlikely exuberance for one recounting a defeat he laments, that saves the book from becoming a great lost-cause slog. Indeed, in describing the largely ineffectual politics of his moderate heroes over nearly half a century, he compares their progress to that of Napoleon’s armies in the disastrous Russian campaign of 1812.

In the 1960s, as Kabaservice’s intense ideological and intraparty battles were being fought out, many of us who were in no way political or ideological found ourselves forced to take sides. And, like most of the men with whom I had served in the Marine Corps, I joined the bad guys.

From Alaska, where I’d lived for five years after discharge and earned degrees at the University of Alaska, to California, where I did graduate work and supported my small family, my political awareness grew. As the day-to-day demonstrations, disruptions, and frequent campus violence at Berkeley and other campuses increased, I decided to describe what was happening there and sent a series of articles to National Review, the only thoughtful publication in the country likely to be interested in articles on campus unrest written by a bad guy.

The articles were accepted. Bill Buckley came to San Francisco and hired me as an editor and writer at National Review. While there, I wrote a book called The Kumquat Statement, for which Buckley provided a flattering introduction. Vice President Spiro Agnew read the book, asked me to visit him in Washington and offered me a job. I was his chief speechwriter when he resigned, then joined the Nixon writing staff and stayed until he resigned. Then I repeated the process with Gerald Ford. It was, as they say, a hell of a ride, through some of the stormiest periods in recent American history.

WHY DID so many of us throw in our lot with the bad guys? There were a variety of reasons, no doubt. But primarily, it seemed to us that through the 1960s and into the 1970s, the country was caught in the grip of steadily accelerating violence—the 1968 Democratic National Convention and the Chicago riots, riots at Berkeley with the National Guard in the streets, the People’s Park, San Francisco State, Columbia, Watts, Detroit, riots over school busing in Boston, the assassinations of Robert Kennedy and Martin Luther King. And underlying it all was the Vietnam War and its escalation—a legacy from two Democratic presidents (opposed by Dwight D. Eisenhower) and their best and brightest advisers. All in all, on the streets, in the schools, in people’s homes, on TV and in real life, it seemed to most Americans that things were running very badly out of control. It was to end this turmoil that they elected Richard Nixon. And despite the nearly universal hostility among the media, the universities, and the liberal and “moderate” elite, he carried out that mandate.

Kabaservice expresses concern over the unrest of the period, but he comes at it from a different angle, demonstrating a basic and implicit hostility to nonmoderates, as when he matter-of-factly refers to “the disruption of the Democratic Party convention in Chicago by Mayor Daley’s violent police repression of antiwar protests.” That, of course, is gospel on the academic Left. But ordinary citizens of Chicago, along with the policemen involved, saw it differently—a violent demonstration of destructive civil disobedience, orchestrated by groups such as the Students for a Democratic Society, Weatherpeople, Black Panthers, the Revolutionary Communist Party and other splinter groups.

But for Kabaservice’s moderates, the approach always seemed the same: never blame rioters, ignore what we saw before our eyes, search for root causes, form a commission and issue a report. Throughout the 1960s, he writes, “moderate Republicans staged furious efforts to retake control of the party. Moderate intellectuals defined their ideology . . . [as being] organized around causes such as civil rights and opposition to the war.”

But that was precisely what a growing number of Americans didn’t want their political parties to be organized around. Nor were they inspired by the presidential candidates chosen to carry the moderates’ message—Nelson Rockefeller, William Scranton, George Romney. The latter conducted, in the wake of campus violence and some of the worst race riots in American history, a coast-to-coast campaign for the 1968 nomination, telling voters it was their duty to “listen to the voices from the ghetto.”

They did. And what they heard was “Burn, Baby, Burn.” They listened to the campuses and heard the chant, “Ho, Ho, Ho Chi Minh, the NLF is gonna win.” They listened to Romney as he tried to blame his previous hawkish Vietnam War stance on “brainwashing.” They listened, and they weren’t buying. Kabaservice’s moderates were selling a product well past its expiration date, and there were plenty of liberal—or moderate—salesmen in the other party who could peddle it more effectively.

Kabaservice insists that “moderate Republicanism” differs from liberalism, but then tells us that “moderate Republicans helped shape many of what are typically thought of as Democratic achievements, from certain Progressive era and New Deal reforms to the architecture of the post-World War II global order.” True enough, no doubt, and admirable, especially if you’re inclined to support Republican men and Democratic measures. But that was then, and in our time it fell to nonmoderates like Richard Nixon and Ronald Reagan to radically repair and restructure that global architecture.

Kabaservice also lauds the role of moderate Republicans in the enactment of civil-rights legislation and asserts that “during the critical decade of the 1960s, moderates defended civil rights and civil liberties,” often in the face of stiff bipartisan opposition. But again, no matter how noble the objectives, the thrust of the efforts was out of time and political step, which helps explain the inability of moderates to connect with the electorate during a decade when civil unrest and disorder trumped other concerns.

At times, Kabaservice’s defense seems almost fanciful. After cataloging a list of our contemporary ills—among them environmental degradation, energy dependence, unfunded Social Security obligations, pensions and deficits—and attempting to account for them, he suggests that “the absence of the moderate Republicans may be the single greatest explanatory factor.” He never makes clear precisely how. But, he concludes, “If American politics can be compared to an ecosystem, then the disappearance of the moderate Republicans represents a catastrophic loss of species diversity.”

And how, precisely, if you’re inclined to extend that unlikely metaphor, is this “species” identified? It’s here that Kabaservice may have put his finger on the problem. The moderate movement, he writes, apparently drawing on a study by the Ripon Society, moderate Republicanism’s most prominent organization, “was inescapably an elite movement.” Most of those who identified themselves with it “lived in the cities and affluent suburbs. Their political efforts were funded by East Coast multimillionaires . . . and publicized by the New York Times and Washington Post.” The younger moderates

participated in and sympathized with the civil rights movement, the student and antiwar movements, and the nascent feminist movement. They campaigned for thoughtful, independent-minded candidates and aimed their appeals and proposals at intellectuals and “informed opinion.”

And that, in the end, may be precisely what did them in. Kabaservice blames conservatives for knocking his moderate Republicans off the electoral maps. But viewed objectively, it was the American people who did that. They perceived a certain irrelevance and unreality in the message and simply didn’t warm to what Kabaservice calls “a separate political and ideological viewpoint”—a viewpoint that, even now, he seems unable to define.

Pullquote: Kabaservice blames conservatives for knocking his moderate Republicans off the electoral maps. But viewed objectively, it was the American people who did that.Image: 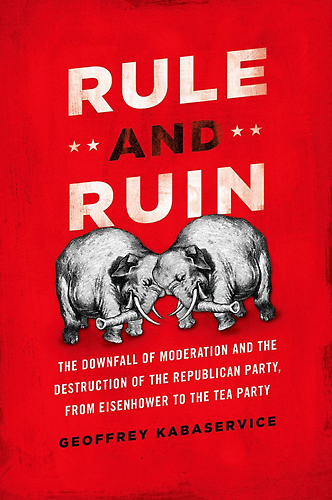