Dilemmas of the Modern Navy

SEA POWER is a conscious political choice. A maritime power’s world standing depends on keeping taut the sinews of naval might. According to the famed American geostrategist Alfred Thayer Mahan, that means amassing international commerce, forward bases, and merchant and naval shipping. But just as Great Britain, in a “fit of absentmindedness,” assembled an empire on which the sun never set, it may be possible to abdicate world leadership thoughtlessly. Indeed, slipping into imperial retrenchment would be easier for the United States, which maintains no colonies abroad, than it was for bygone empires that conquered vast territories and then—having connected national dignity and pride to geographic objects—had to defend them. Withdrawing from diplomatic entanglements and drawing down armed forces are easier than surrendering territory.

That’s doubly true since the benefits of policing the global system are remote and abstract, while the benefits of pulling back—cost savings in particular—are concrete and quantifiable. No wonder naval proponents fret about what the future may hold. They fear the United States will back into a decision of enormous importance, letting dollars and cents drive the process rather than strategic thinking. Such fiscal imprudence is not uncommon. As the late admiral J. C. Wylie observes in his treatise, Military Strategy, lawmakers make strategic decisions through the budget process, whether they realize it or not.

Which brings us to Seth Cropsey’s new book, Mayday. Cropsey warns that the United States, consciously or not, is allowing a chasm to open between political ends and the ways and means of strategy. Much like Walter Lippmann, who lacerated early twentieth-century presidents for “monstrous imprudence” in foreign policy, Cropsey maintains that—with apologies to Theodore Roosevelt—America still comports itself like a hyperpower while toting smaller and smaller sticks. It has neglected the hard national power needed to back up ambitious policies. Misaligning purpose and power invites challenge and failure. That’s especially true in Asia, where a new maritime contender, China, is on the make.

American sea power, says Cropsey, is in a parlous state. He has the chops to make such a case. A senior fellow at the Washington-based Hudson Institute, Cropsey served as deputy under secretary of the navy during the administrations of Ronald Reagan and George H. W. Bush. Thus, he was intimately involved in developing the 1986 maritime strategy, the guiding document for maintaining sea supremacy in the event of war with the Soviet Union. Since then, his career has included stints at the American Enterprise Institute and the Heritage Foundation. Cropsey comments on naval matters regularly in such outlets as the Weekly Standard. He writes fluently about affairs in great waters.

It’s difficult to gainsay Cropsey’s central message, which is that the U.S. sea services—the navy, Marines and coast guard—are under mounting strain. Arresting this decline, in both numbers and capability, is crucial if Washington wants to sustain the dominant position it inherited after World War II. Failing that, national leaders will have to scale back their policy aims to more modest goals that are executable despite straitened circumstances. There are few other alternatives. Nothing good comes from a mismatch between policy, strategy and means—as Lippmann testified. He blamed the power vacuum created by U.S. ineptitude for encouraging Japanese troublemaking in the 1930s.

CROPSEY APPLIES a back-to-basics approach to his topic. He starts with Mahan and his groundbreaking book, The Influence of Sea Power upon History, 1660–1783, which served as a kind of blueprint for the creation of the modern U.S. Navy. A prolific writer and thinker, Mahan also served as the second president of the Naval War College (the institution I call home). Historian Margaret Tuttle Sprout dubbed him America’s “evangelist” of sea power, and indeed he beseeched Americans to build up domestic industrial production at home and trade commerce abroad; create fleets of merchantmen and warships; and establish forward bases to support the voyages of fuel-hungry vessels. For him, sea power consisted of this merger of geographic, economic and military implements. Mahan envisioned a symbiotic relationship whereby trade and commerce would generate sufficient tariff revenue to maintain a navy, which in turn would protect commerce. He coined the term “statesmanship directing arms” to denote the art of using naval power for political ends. Sea power thus connotes far more than fleets of armored dreadnoughts battering away at each other on the high seas. It encompasses national purpose, as well as operations and tactics.

Mayday next surveys U.S. maritime history, touching on the classical history that molded the thinking of sea-oriented founders such as John Adams. Oddly, Cropsey spends far more pages reviewing the half-forgotten War of 1812 than he does World War II, a conflict of far greater magnitude and strategic consequence. But he correctly portrays the War of 1812 as a debacle. Mahan and Theodore Roosevelt wrote histories of the war precisely to debunk the popular fantasy that the plucky U.S. Navy had whipped the foremost navy of the day. Cropsey, too, refrains from hyping the single-ship victories of the war’s first year. Henry Adams, in his chronicle of the war, rightly points out that the suffocating Royal Navy blockade drove the American economy to “exhaustion.” A shift in British tactics broke U.S. heavy frigates’ string of early successes, even as the approaching defeat of Napoleonic France freed up warships in Europe for blockade duty off North America. Sobriety, not euphoria, represents the proper attitude as Americans now mark the bicentennial of the War of 1812.

Following this capsule history, the book is largely a venture in net assessment. Net assessment refers to the art of sizing up the physical, diplomatic and military surroundings within which an endeavor will unfold. Carl von Clausewitz provides probably the handiest checklist for assessments, urging statesmen and commanders to appraise the strength and situation of the competitors; the nature of their political goals and the importance they attach to those goals; the capacity of the contending governments, societies and armed forces; and the competition’s likely influence on third parties and bystanders. Cropsey roughly follows the Clausewitzian template, though not explicitly. He finds the United States increasingly wanting across all of these parameters, in stark contrast to ambitious competitors on the march. He takes stock of such factors as budget deficits and the national debt, competing demands on taxpayer dollars, and the escalating cost of fielding ships, aircraft and naval weaponry. These factors have merged into a perfect storm, buffeting efforts to sustain a robust fleet.

How much stress the inventory can stand is open to question. The author notes that, in simple numbers of hulls, the fleet is now smaller than it has been in nearly a century. He also points out that the navy is modifying the composition of the fleet—and attenuating its striking power in the process. It is important to note that not every ship is a shooter. Carrier and amphibious groups travel with entourages of escorts, logistics vessels and other support craft. Each of these vessels, however light or heavy its armament, counts toward the overall tally as one hull.

Numbers, then, can be deceptive. For example, a three-hundred-ship fleet composed entirely of aircraft carriers or destroyers bristling with weapons would clearly be a different creature from a three-hundred-ship fleet made up of unarmed oilers and ammunition ships. Yet the United States could claim to have fielded a three-hundred-ship navy in both instances. Cropsey argues that the navy, in its effort to keep up overall numbers, is diluting its fleet’s combat power. To estimate the navy’s true combat strength, it is necessary to factor in the proportion of battle-force combatants, light combatants such as the new Littoral Combat Ships and support vessels.

Cropsey bemoans this U.S. strategic drift particularly in light of the activities of prospective competitors. Foremost among these is China. In focusing on China’s impressive naval and military buildup of the past two decades, the author points out that the military balance is a relative thing. If the U.S. Navy thins out its combat power and its capacity to project that power into far-flung regions such as East Asia, it in effect accelerates China’s rise to great maritime stature. Summoning up the resolve and the resources to sustain U.S. maritime primacy is critical to preserving the Far Eastern military balance. Americans, says Cropsey, must make the conscious political choice anew for sea power. IT’S DIFFICULT to fault Cropsey’s general conclusions. American sea power does face perilous times—times that warrant soul-searching on the part of officialdom and rank-and-file citizens. Still, it is possible to take issue with the route by which he reaches his conclusions. I offer here a few thoughts designed not to contradict his overarching thesis but rather to enrich the debate over America’s nautical destiny.

For one thing, the author presents a rather static, all-or-nothing view of the strategic setting. On several occasions he makes the doubtful claim that maritime decline is irrevocable. Indeed, he opens his treatise by proclaiming, “No state that has allowed its seapower to decline has succeeded at recovering it.” Really? Cropsey himself acknowledges that the downfall of classical Athens, recounted by Xenophon, lasted only a minute against the sweep of history. After crushing the vaunted Athenian navy at Aegospotami, Spartan commanders ordered that navy dismantled. Athens was permitted to maintain a minuscule twelve-ship flotilla. The long walls that had enclosed the city and its seaport were pulled down, rendering Athens vulnerable to overland assault.

Pullquote: The benefits of policing the global system are remote and abstract, while the benefits of pulling back are concrete and quantifiable. No wonder naval proponents fret about what the future may hold.Image: 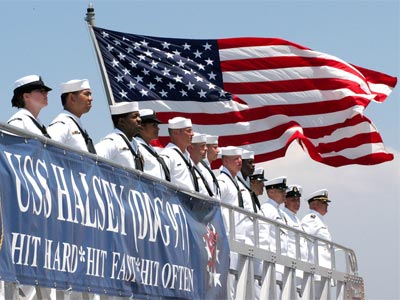