He would not always feel that way, of course. But first he would serve as president of Columbia (defending scholars against the “Red Scare” that was only then gathering force but never really embracing the campus life or the Columbia zeitgeist) and as supreme commander of NATO. For most figures in history, these would be assignments and legacies enough. But for Eisenhower, they were the bridge between two star turns on the world stage. They provided him with perspective, executive leadership, and positions where his assumptions about the structure and nature of power were challenged. (For there is nothing, not even de Gaulle, to match the ferocity and intransigence of an Ivy League faculty.) During those years, he was given the indispensable opportunity to think deeply about the important issues of the time, including the role of tolerance and freedom in a democratic society facing a mortal threat from a competing ideology; the place of atomic weaponry in the postwar world; and, not unrelated, the struggle between Communism and the West.

ON THE surface, Eisenhower’s overwhelming popularity gave the 1952 election little suspense. But there were significant consequences, as the nation was to see decades later if not clearly at the time. In this election were the first substantial cracks in the solid South; Eisenhower began the general-election campaign in Georgia, one of FDR’s home states, and in the audience were William Hartsfield, the Democratic mayor, and Eugene Talmadge, the Democratic governor. By the time the ballots were cast, Tennessee, Texas, Virginia and Florida had slipped into the GOP column. Catholics had begun moving away from their New Deal moorings, and the suburbs were leaning Republican. All this adumbrated a mass movement that would transform American politics and render the nation politically unrecognizable by century’s end.

He assembled a cabinet that was remarkable for its lack of experience in Washington—not one member possessed it—and set a path for his presidency that had little resemblance to the 1952 platform. “There would be no victory in Korea, no reduction in foreign aid, no shift in emphasis from Europe to Asia, no immediate tax cut, and no end of the New Deal,” Smith writes. “The changes would be incremental. Eisenhower was a realist, not an ideologue, and his policies would hew to the middle of the road.”

The irony of the age is that the man who would lead the West against the red-tinged prophets of central planning believed deeply in planning, and when it wasn’t done he was seriously aggrieved: “Ever since 1946 the experts have been yapping about what would happen when Stalin dies and what we should do about it,” he said at a cabinet meeting, the frustration oozing from the man. “Well, he’s dead. And you can turn the files of our government inside out looking for any plans laid. We have no plans.”

In episodes where no plans were possible—the fight over the Bricker amendment, for example, which would have given new powers to lawmakers in international treaties—he found common cause with his presumed rivals, such as Lyndon B. Johnson, whose wily machinations helped defeat the amendment. But he was not the captive of his presumed allies. The French at Dien Bien Phu begged for American help but didn’t get it. And Britain’s joint action with France during the Suez crisis only served to anger Eisenhower, not to make him prisoner of expectations.

This was especially so on military matters. In his first State of the Union message, the president said that “to amass military power without regard to our economic capacity would be to defend ourselves against one kind of disaster by inviting another.” He pressed ahead with his New Look concept for the military, giving increased funding to the air force while reducing army and navy appropriations, despite the opposition of some of his own appointees, including the generals Matthew Ridgway and Maxwell Taylor, both of whom he replaced as a result. “Eisenhower’s emphasis on the New Look and nuclear weapons preserved the peace during the Cold War,” Smith writes. “But,” he goes on:

It spawned a variety of side effects, some benign and beneficial, others downright pernicious. Among the pernicious was the arms race that led to the development of thermonuclear weapons, intercontinental ballistic missiles, and the spiral in defense spending that Ike had hoped to avoid.

On the positive side: increased pure research that paid off for decades.

Through it all Eisenhower displayed an amiable artistry in ambiguity. In 1955, Joseph C. Harsch of the Christian Science Monitor asked the president whether he would use tactical nuclear weapons if there were a conflict with China over Quemoy and Matsu. Eisenhower’s response is an object lesson in obfuscation: “The only thing I know about war are two things: the most changeable factor in war is human nature in its day-by-day manifestation; but the only unchanging factor in war is human nature.” That explains nothing, of course, because in one inscrutable sentence Eisenhower described human nature as both changing and unchanging. But it got him off the hook and allowed him to move on, and he employed the tactic repeatedly. It was brilliance in the guise of buffoonery.

Eisenhower’s views on race have been the subject of enormous controversy, not without justification. He was, above all, a product of his region and race, both of which gave him a constricted view of what might be possible. Eisenhower was not a bigot, but by temperament, inclination and rearing he was not a civil-rights activist either. He wanted progress but without rancor—that was the Eisenhower way, after all—but in the case of race, that was all but impossible, and he should have known it. Even so, he ordered the end of segregation in the nation’s capital and took Harry Truman’s offensive against segregation in the armed forces to a new, more effective level, with the result that by 1954 no racially segregated units remained in the armed forces. Both achievements are substantial and worthy of praise, but they were mere slices of the loaf, not even half the loaf. Even so, he worked quietly and by and large effectively with religious leaders, including the Reverend Billy Graham, to sow the notion that segregation was odious and unacceptable. And in the famed Little Rock Nine crisis he gave verbal support to the nine black children who tried to enter Central High School, decisively issued an order commanding “all persons engaged in . . . obstruction of justice to cease and desist therefrom, and to disperse forthwith,” and called in the 101st Airborne Division.

His final years were full of travail including Sputnik, the Middle East, the U-2 incident, and even the prospect of being succeeded by a vice president from California he didn’t fully trust or a junior senator from Massachusetts he didn’t fully respect. Eisenhower approached each of these challenges with confidence, competence and experience, though in the case of Nixon his gracelessness in promoting his lieutenant commander may have been deliberate and not reflexive. It is that combination of confidence, competence and experience that sets him apart from every president who followed, with the possible exception of George H. W. Bush, whose tenure in the White House was only half that of Eisenhower, Reagan, Bill Clinton and George W. Bush. All the other modern presidents, especially the last three, faced crises for which they were unprepared or at least lacked personal experience. That is the Eisenhower difference. He was prepared for almost everything that came his way. In war, he triumphed with intelligence and power. In peace, he triumphed with serenity and mastery. There was ample reason to like Ike in his time, and there is even greater reason to like him now. Indeed, history has shown that we have not seen his like again. A few decades ago, the absence of a latter-day Ike figure might have been the occasion for relief. In the second decade of the twenty-first century, it occasions an expression of despair.

David M. Shribman, a Pulitzer Prize–winning journalist, is executive editor of the Pittsburgh Post-Gazette and a nationally syndicated columnist. He formerly served as a political writer for the New York Times and Wall Street Journal and as Washington bureau chief for the Boston Globe. 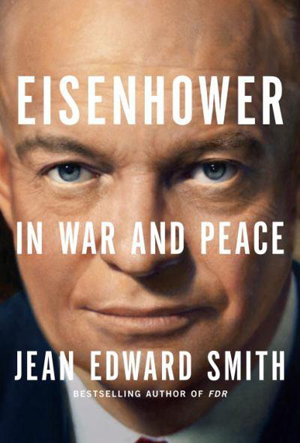