The defense world is buzzing over journalist Tom Ricks’s new book, The Generals. Ricks thinks we don’t make generals like we used to.

He may be right.

During the Second World War, General Robert “Ike” Eichelberger took out a Japanese sniper. It was a personal act of war, a throwback to ancient days when a commander’s prowess was measured by the blood he spilled in battle. Eichelberger merits a positive mention in Ricks’s book. Few of today’s generals come off as well.

Ricks, however, is more interested in grading generalship than marksmanship.

A respected war journalist and bestselling author, Ricks assesses a long list of senior army officers from George C. Marshall to David Petraeus on the tasks of the “modern major general”: organizing for combat; making decisions in battle, and bridging the gap between what political leaders demand and what armies can deliver.

Ricks puts great emphasis on a general’s willingness to fire commanders who just don’t cut it. He contrasts Marshall’s house cleaning after Pearl Harbor with the present-day reluctance to fire underperforming general officers. The trend, Ricks argues, reflects a deeper malaise. “Tolerance of below-average performance,” Ricks concludes, “has [had] a corrosive effect on the quality of Army leadership.” Army leaders are by and large technically competent but play it safe and are overly fixated on pleasing their political masters.

To make his case, Ricks whisks through the U.S. Army’s combat history from Normandy to now. The Generals is part breezy biography with short chapters on pivotal senior leaders such as Marshall, Patton, MacArthur, Ridgeway, Westmoreland and Petraeus. Also profiled are more junior generals such as “Terrible” Terry Allen, “Hanging” Sam Williams and Eichelberger. Ricks uses their careers to illustrate how the Pentagon brass shape the officer corps. The Generals also presents riveting combat vignettes to show how leadership affects life at the sharp end of war.

The impressive cast of characters and events is one of the book’s great virtues. Ricks tells his tales well. His description of the battle of the Chosin Reservoir, for example, is riveting. The Generals provides just the right balance of detail and analysis to make the book both good scholarship and a very, very good read.

In many ways, The Generals is a nonfiction update of Anton Myrer’s Once an Eagle. Myrer’s novel covers the careers of two American generals from World War I to the Vietnam era. One represents the essence of selfless service, the other the epitome of a self-serving officer. Over the course of the novel, the virtuous character, Sam Damon, sacrifices everything while increasingly being labeled as out of step with the army mainstream. Meanwhile, his doppelganger rises to the highest rank of influence and power.

Parallels between Once an Eagle and The Generals are more than superficial. Myrer always claimed that the two characters were composites of several historical figures. The two careers and personalities, however, closely match the valiant, hard-charging Matthew Ridgway and the slick Maxwell Taylor. Both are featured in The Generals.

Ridgway earns respect as a throwback to Marshall’s World War II standards of putting the mission and the troops first. Taylor gets slammed for representing “almost the opposite of George Marshall.” Ricks rightly labels him “intensely politicized. . . . He made a habit out of saying not what he knew to be true but instead what he thought should be said.”

The chapter covering World War II was where Myrer strayed most from the Ridgway-Taylor model. While Ridgway and Taylor served in Europe, Myrer’s characters fight in the Pacific. Here, Myrer patterned his heroic character after Eichelberger. The organizational man reflects “Doug Out” Douglas MacArthur, whom Myrer thoroughly despised. In similar fashion, Ricks gives Eichelberger high marks and casts MacArthur as a “negative example” for future army leaders.

Although The Generals brings the story up to date, it is a story we have heard before. And while the narrative is powerful, it leaves a lot of the story out. That’s fine for a novel and acceptable in a solid journalistic account of America and its generals. But it’s a deficiency in a book that attempts a full understanding of how the U.S. Army has been commanded in the modern era.

Studying American generals in absence of the America around them provides only one side of the story. The United States has a democratic army. Its officer corps, particularly the senior officers of the post–World War II era, strongly reflects that.

But Ricks for the most part leaves out the rest of America. He rightly mentions William Whyte’s 1956 best seller, The Organization Man, a critical portrait of post–World War II corporate America. Whyte attacked an ethos where the goal of serving a corporation had become getting along in the organization. Ricks, however, simply uses Whyte’s book as exemplar of what he argues happened to the army. It is not that simple.

In practice, army officers—like many corporate executives—read Whyte’s book and shared his concerns. It should come as no surprise that the struggle over quality leadership in the military tracked with similar scrimmages in corporate America. That explains why both postwar institutions produced firebrands like William DePuy and GE head Jack Welch as well as martinets like William Westmoreland and “Choo-choo” Charlie Wilson, who headed General Motors before becoming Eisenhower’s secretary of defense.

The pull against the “organization man” in army culture was as strong as those who sought to emulate the company-man model. The intense popularity of Once an Eagle among junior and senior military officers demonstrated a widespread rejection of the organizational-man mentality within the army.

Similarly, the army has always had difficulty dealing with the proper notions of civil-military relations. Like the rest of modern American society, the modern army officer corps grew up on Samuel Huntington’s The Soldier and the State. This 1957 book defined what “good” civil-military relations were supposed to look like in that era. In Huntington’s formulation, there were distinct spheres for military and political decision making that didn’t overlap. Generals fought campaigns, politicians fought wars and the two were supposed to stay out of one another’s business.

Huntington’s model was deeply flawed, but generations of Americans both in and out of uniform grew up thinking it was right. That was why army leaders rejected, as Ricks points out, the MacArthur mode of placing their own importance and opinion above that of the Republic. Instead, they lapsed into Huntington’s subservient model. Ricks recalls a telling anecdote when President Johnson warns Westmoreland, “I have a lot riding on you. . . . I hope you don’t pull a MacArthur on me.” No fears. Westmoreland never did.

Trapped in Huntington’s paradigm, it was difficult for Americans to distinguish between men such as MacArthur and Taylor—who played politics—and men like Marshall and Eisenhower, who understood politics and used that understanding to help accomplish their mission rather than advance their rank and reputation. The fact that, even today, Eisenhower is often dismissed as a “political” general with no real fighting qualities shows that most still don’t get it. Ike’s ability to hold a fractious alliance together both on and off the battlefield was the acme of strategic war-fighting skill. Great commanders must understand politics and that in war the spheres of fighting and political leadership overlap.

Perhaps the story least well told in The Generals is that, in the end, America largely got the army it paid for. During the interwar years, Congress let the U.S. Army overstuff the officer corps so there would be a cadre for mass mobilization. With few pressures on the corps and few opportunities for promotion, these men could largely pursue whatever interested them. Ike could spend years being schooled by Fox Connor and tasked by MacArthur. Taylor could study in Japan. Eichelberger could run West Point. This created an officer corps with a wide variety of experience, temperament and skills. And that’s exactly what was needed to fight a global war with different theaters and different challenges. The Marshall system just had to sort through to find the right general for the right job.

For most of the Cold War, however, Congress paid the army to prepare for the battle of the Fulda Gap in Germany. And that’s pretty much what the army did—structuring its promotion system and most everything else for that mission. No surprise that when the army was asked to do anything else, it stumbled. Also unsurprisingly, once Reagan properly funded the military, the veterans of Vietnam—a supposedly lost generation of organization men—were able to rebuild it into a world-class fighting force.

Perhaps the greatest tragedy of the modern military is not the rise of the organization man but the fact that the nation—both in and out of the armed forces—missed the real lessons of the first Gulf War. Too much ink was wasted on triumphalism and not enough on the reality that the army and its generals were born and bred to fight the Fulda Gap. Rather than use the post-Gulf War experience to build the army the United States needed, Washington used the easy win as an excuse to cash a massive peace dividend, leaving the army without the right resources or many of the right leaders for the next great round of conflicts. That is not entirely the army’s fault or the product of a corrosive army ethos. That is the fault of a country that allowed its army to atrophy. 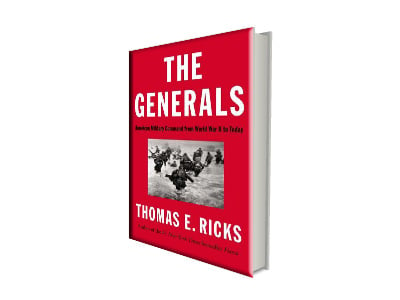