THE SUBTITLE of Robert K. Massie’s biography announces the book’s keynote: it is to be a “portrait of a woman,” perhaps with a nod to Henry James. The epigraph, in the words of the Earl of Buckinghamshire, the British ambassador to Russia in the first years of Catherine’s reign, concurs: “Perhaps the best description of her is that she is a woman as well as an empress.” Massie’s focus is on Catherine’s personal life. More than half the book’s pages are devoted to the period before her accession. Describing Catherine as a woman allows him to exercise the formidable perceptive and stylistic gifts that have distinguished his previous biographies, Nicholas and Alexandra: The Classic Account of the Fall of the Romanov Dynasty and Peter the Great: His Life and World, works that bring Russian rulers and their courts to life and give the reader a sense of witnessing scenes from the past.

Massie evokes Catherine’s personal life and the figures she knew with great skill and in telling detail. But the separation of Catherine as woman from Catherine as empress introduces a misleading duality to our understanding of her personality and her historical significance. Catherine’s personal life served her political goals and unfolded within the context of her status as absolute monarch who played multiple roles in exercising authority to advance the enlightenment and power of Russia. By narrowing his focus, the author diminishes her person and provides only a limited sense of Catherine’s dedicated efforts as an enlightener, lawgiver and reformer of state institutions.

Catherine the Great is particularly well suited to Massie’s talents. Possessing great intellectual gifts, extraordinary ambition and irresistible charm, she combined the charisma of power with a seemingly insatiable sexual appetite. Catherine comes to life in part through Massie’s frequent citation of her memoirs, which chart the course of her personal life in often absorbing detail. Catherine tells us of a neglected and emotionally deprived childhood, a cold and rigid father, and a mother whose affections were for her afflicted older brother, who died at age twelve. Catherine felt disregarded, unloved and homely. Massie concludes that

her rejection as a child helps to explain her constant search as a woman for what she had missed. Even as Empress Catherine, at the height of her autocratic power, she wished not only to be admired for her extraordinary mind and obeyed as an empress, but also to find the elemental creature warmth that her brother—but not she—had been given by her mother.

Catherine’s rise from the neglected daughter of a minor German prince to the throne of the Russian Empire is indeed an amazing one, combining the pathos of a Cinderella tale with an epic narrative of triumph. With the encouragement of Frederick the Great, who sought diplomatic advantages for Prussia, Empress Elizabeth of Russia (the daughter of Peter the Great) brought the fourteen-year-old Princess Sophia of Anhalt-Zerbst to St. Petersburg to prepare her to wed Peter’s grandson, Grand Duke Peter of Holstein-Gottorp, then fifteen years old. In the absence of a law of hereditary succession, Elizabeth had designated young Peter heir to the throne. This was expedient because in 1722, Peter the Great had replaced the customary practice of hereditary succession based on primogeniture with designation by the ruling monarch.

Peter’s decree both complicated the practice of succession and introduced a new requirement of merit. He promulgated his decree in contravention of the statutes of the first decades of the eighteenth century issued by European monarchs. Those had established permanent, fundamental laws of hereditary succession, but Peter the Great openly repudiated the premise of these laws and asserted the supremacy of the monarch’s will to all regulation, even that of a succession law, which in Europe was considered the fundamental law of all monarchies. The decree openly subordinated the principle of heredity to the well-being of the realm, determined by the untrammeled will of the rational legislator. Heredity had produced a feeble-minded half brother and a recalcitrant son. He decreed that the ruling czar always would have the freedom to designate whom he wished and to remove the one who had been designated. In declaring this prerogative, he claimed to act as defender of “the integrity of the state.”

Peter’s law aroused serious misgivings in Russia and Europe. In subsequent decades, it sowed doubts about succession that led to crises resolved only with the intervention of the principal regiments of the Imperial Russian Guards. The Guards helped ensure the accession of the empresses Anna Ioannovna and Elizabeth as well as Catherine the Great. Elizabeth and Catherine subsequently took command of the Guards. After seizing power, both women appeared in the uniform of the Preobrazhensky Guard, the oldest and most prestigious of the regiments. The destabilizing consequences of Peter’s decree gave rise to a number of projects to create a more established and predictable order of succession. Elizabeth, who had participated in the writing of such projects, hoped to bring an end to these succession crises by designating Peter of Holstein heir, marrying him off at an early age and encouraging the birth of a son.

This explains the drama of the boudoir that unfolded after the sixteen-year-old Princess Sophia, renamed Catherine after Peter the Great’s spouse, wed Grand Duke Peter Fedorovich in 1745 at a lavish celebration publicized across Europe. Catherine’s memoirs detailed the tragic-comedic dilemmas and the chagrin of her apparently unconsummated marriage to the heir. As children, they got along well enough, but Peter felt no attraction to his assigned bedmate. Catherine, willing enough to undergo this trial for the title of empress, was again subject to painful rejection. Massie describes Elizabeth’s efforts as she appointed women of different temperaments to watch over the couple and devise various schemes to get them to mate. All was to no avail. Eventually, Serge Saltykov, a deft and charming seducer, was introduced to the scene and succeeded in impregnating the grand duchess. He was the likely father of the grand duke and future heir and emperor, Paul Petrovich. But the paternity of Paul has long been subject to controversy, and due to the effort to preserve a semblance of dynastic continuity, it cannot be established conclusively. In the nineteenth and early twentieth centuries, the Almanach de Gotha, a royal genealogical directory, referred to the dynasty as “Holstein-Gottorp-Romanov” to give official sanction to Paul Petrovich’s dubious paternity.

Not only did Catherine’s husband seem infertile or impotent, he also acted in an erratic and infantile manner. In Catherine’s rendering, he was cruel and witless, occupying himself by parading soldiers, playing with toys, carousing and taking dubious mistresses. All of this naturally heightened Catherine’s sense of worthlessness and helplessness, which Massie evokes with great skill. But if the grand duke was witless, the grand duchess showed a sure understanding of what to do and whom to approach, which grew more formidable as her situation deteriorated. Unlike her husband, she took an active interest in the Enlightenment thought of the time. She befriended foreign ambassadors at the Russian court and influenced officials responsible for Russian foreign policy. Massie gives detailed and vivid accounts of the shifting alliances and attachments formed under the empress’s hand, and his sections on the dynastic politics of the era are among the most impressive in the book. He conveys Catherine’s formidable powers of seduction, dominating through love. Her unremitting sexual appetites became a way to acquire intelligent and energetic devotees upon whom she could rely in the snake pit of the Russian court. Such lovers as Stanislaus Poniatowski, Grigory Potemkin and Grigory Orlov served the purposes of Empress Catherine. Her boudoir became a source of charisma that would enable her to find reliable agents of her will once she ascended the throne.

The death of Empress Elizabeth brought the young Peter to the throne as Emperor Peter III and enabled him to unleash his worst intentions. Massie describes how he prepared to divorce Catherine and marry his mistress, Elizabeth Vorontsova. In this respect, he would break with the practice introduced by Peter the Great of marrying children of the ruling emperor to foreign royalty rather than to members of Russian noble families, as had been the practice of seventeenth-century czars. He antagonized the Orthodox Church by ordering the confiscation of monastery lands, and he upset the Guards’ regiments by introducing Prussian uniforms and discipline, following the example of his idol, Frederick the Great of Prussia. Finally, he spared Frederick defeat in the Seven Years’ War by withdrawing the Russian armies, which were approaching Berlin, and suing for peace. Despite Frederick the Great’s admonition, he even failed to announce plans for a coronation, a ceremony that would have consecrated his accession in the eyes of the elite. At this point, Catherine allied herself with the Guards and organized her assault on power.

Massie describes the drama of the coup with especial flair, bringing out Catherine’s brilliant strategy and tactics designed to isolate, remove and incarcerate her husband. Like Elizabeth, she made herself the leader of the rough and ambitious members of the Imperial Guards, wore the Preobrazhensky uniform, rode astride rather than side saddle, and led the Guards in their capture of the emperor at Peterhof. Then, at their head, she proceeded to Petersburg, where she received their oath of allegiance. Though she let fly some rumors that she would be acting as regent for her son, Paul, these were soon quashed, and she ascended the throne as Catherine II, empress of Russia. 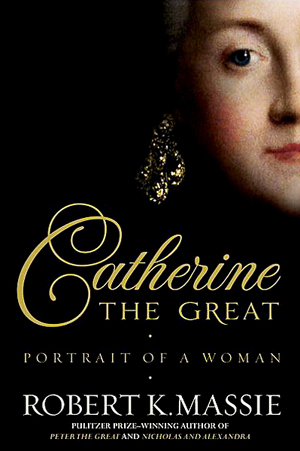