Though Kennan’s contempt for his peers comes through loud and clear, this is still relatively restrained. When it was a matter of public consumption he knew how to keep his demons in check. To be sure, it was widely understood around the Washington of Kennan’s day that he was—how shall we put it?—a bit of an eccentric. Yet he also managed to eke out a pretty spectacular career over two decades in the State Department, one of Washington’s most staid bureaucracies, and his subsequent triumphs in the academic stratosphere at Princeton suggest that he knew how to maintain his place in the establishment. Throughout his career his desperate urge to wield influence seems to have held him back from expressing his most outré views in public. The major exception, perhaps, was his 1993 book Around The Cragged Hill: A Personal And Political Philosophy, in which, among other things, he proposed dividing the United States into twelve more manageable minirepublics. But by then he was eighty-nine, and could afford to indulge his inner curmudgeon without much fear of the consequences.

Even so, these newly published diaries—actually a smoothly edited sliver of the twenty-two thousand pages he produced during eighty-eight years of writing—still come as something of a shock. Kennan wasn’t just a Grumpy Old White Guy avant la lettre; he was already deep into the role just a few years after graduating from college. Here he is at age twenty-four:

The Americanization of Europe, the flooding of the continent with the cultural as well as the economic goods of the New World: all this is something which Europe owes to its own imperfection. Americanism, like Bolshevism, is a disease which gains footing only in a weakened body. I have lost my sympathy for the Europeans who protest against the influx of American automobiles and American phonograph records. If the Old World has no longer sufficient vitality, economic and cultural, to oppose these new barbarian invasions, it will have to drown in the flood, as civilizations have drowned before it.

He was nothing if not consistent; his views changed little throughout the eighty-eight years that he devoted to his diaries. They are rife with ruminations about the horrors of unbridled democracy, vulgarian culture and deracination. In 1930, he wonders whether a fascist party could ever arise in the United States. Probably not, he concludes: “Somehow, I just can’t conjure up an image of the American who is prepared to put the public good before their personal lives, including love and society.” Or take this characteristic entry from 1977: “A lost people, we WASPs, living out our lives, like displaced people, in a cultural diaspora, unrelieved even by any consciousness of the existence, albeit far away, of a lost homeland.” A 1969 visit to the National Portrait Gallery in London prompts him to express his astonishment that

the obvious erosion of the genes, brought about over this past century by the effect of modern hygiene in keeping alive the weak, should be so central a fact of our time, and yet never talked about, as though contemporary Western humanity were afraid of insulting itself.

A 1978 trip to California inspires a soliloquy about how the intermingling of the state’s various regional groups inevitably leads to a “vast polyglot mass, . . . one huge pool of indistinguishable mediocrity and drabness. Exceptions may be only the Jews and the Chinese, who tend to avoid intermarriage, and, for a time, the Negroes as well.” This could mean, Kennan reflects, that these three groups would ultimately subjugate the rest of the populace to their will—“the Chinese by their combination of intelligence, ruthlessness, and ant-like industriousness; the Jews by their sheer determination to survive as a culture; the Negroes by their ineradicable bitterness and hatred of the whites.” It’s tempting to dismiss this sort of lazy bigotry as a product of Kennan’s times; such views were, after all, quite common among white Americans born in the early years of the century. (Kennan’s biographer, the admirable John Lewis Gaddis, makes just this plea for clemency in his book.) But the thought does not entirely console.

SOME OF HIS crankiest observations deal with the shortcomings of democracy. During his time as a government official Kennan had often witnessed how the principles of good policy were undermined by the short-term thinking of elected politicians, and he had concluded from the experience that democracies were inherently incapable of devising and pursuing rational strategy. On some deeper level, the whole notion of popular rule simply rankled. In a 1984 diary entry, he sketches out his ideal vision of the United States. Plank number one: a national military “directed strictly to the defense of our own soil,” including an army “based on universal national service along Swiss lines.” This is followed by a set of policies for population control: “Men having spawned more than 2 children will be compulsively sterilized. Planned parenthood and voluntary sterilization will be in every way encouraged.” His economic model is based on a comprehensive rejection of all forms of computerization and mechanization: “Everything possible will be done to re-primitivize and localize the economic process: encouragement of the handicrafts, restriction of elaborate processing, break-up of the national distribution chains, maximum development of local resources, & local distribution.” Public transportation is to be actively encouraged, the use of cars and airplanes restricted to cases of hardship or emergency. In agriculture he favors government support of the “small family farm” (aided by dramatic reductions in the use of artificial fertilizers as a means of restoring the soil). He then concludes:

Well, enough of this nonsense. The question at once arises: could any of this, even if desirable, be done other than by the most ferocious dictatorship? The answer is obviously: no. It could never be done by popular consent. The “people” haven’t the faintest idea what is good for them.

There can be little doubt that Kennan was quite sincere in these opinions. They’re simply too frequent, and too zealously expressed, to conclude otherwise. So is it time for us to topple him from the policy Olympus, to dismiss him as a simple lunatic? Do his ugliest or most bizarre beliefs invalidate his worth as a strategist and historian?

I think there are several reasons why the answer must be no. First, there’s the simple fact that these are diaries, not documents for public consumption. Frank Costigliola, who edited the present volume, notes that Kennan’s diary entries tended to thin out when he was in the most productive phases of his career, and especially at the end of the 1940s, when he was at the peak of his influence in Washington. Kennan sought recourse to diary writing above all when he was at his most depressed, Costigliola writes. These diaries are the exercise ground of Kennan’s id, the one realm where he could allow himself to vent, to meditate, to express his darkest fears—all of it with the greatest candor. Kennan did make some of the diaries available to trusted historians while he was still alive, of course, and I’m sure he expected them to be presented to the general public after his death—but he certainly didn’t intend for them to be treated like his memoirs. So even if the diaries can help us to illuminate the wellsprings of Kennan’s thinking, we still need to be careful to balance their content with the polished products of the man’s mind and to situate his ideas in the broader context of an impossibly complicated and eventful life. Indeed, there’s a distinctly unfinished quality to the diaries since they often glide over the most important moments in Kennan’s life and career while dwelling at great length over marginal events and momentary impressions—a pattern entirely in keeping with the notion of the journals as an intellectual sketchbook.

Yet illuminate the wellsprings they do—and Costigliola is quite right to see depression as one of the keys. The editor isn’t kidding when he suggests that Kennan kept his diary as a way of responding to onslaughts of melancholy. Pretty much anything can set the man off: a bad dream, sound films, a perceived slight, a passing glimpse of an attractive woman. Political events are a frequent trigger. Here’s Kennan in 1956 after Dwight D. Eisenhower announced his intention to seek a second term as president: “There can be, for me, only one refuge: learn, at long last, the art of silence, of the commonplace, of humor, anything but serious discussion.” Needless to say, Kennan followed this remark with another forty-nine years of speaking engagements, book writing and polemicizing. He frets when he isn’t working enough, and whines when he’s too busy. In 1968, he muses:

The extreme unhappiness with which I confront the prospect of returning home arises not just from the hopeless profusion of my obligations and involvements there, but also from awareness of my own personal failings & the lack of success I have had in overcoming them. My congenital immaturity of bearing and conduct, my garrulousness, the difficulty I find rejecting hard liquor when it is offered to me as a part of hospitality, the uncontrollable wandering eye—all these things are unworthy of the rest of me, & they limit what I could make out of myself and what I could contribute in these final years of active life. 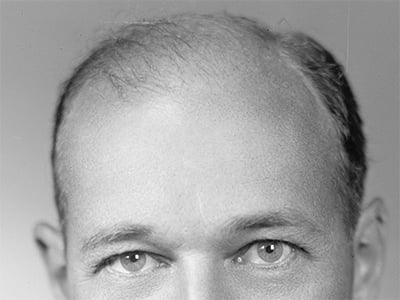