SOME PRESIDENTS did make the appropriate distinctions in relation to some countries. Nixon and Kissinger realized—after almost fifteen years of open Sino-Soviet conflict—that China was not a dependable part of the Soviet empire, and George H. W. Bush understood that America’s motives in the Gulf War had to be limited to ousting Iraq from Kuwait. These American presidents understood that if the United States didn’t want to incur a nationalist backlash, it would have to make clear that its aims were limited.

One way to do this—going back to Wilson’s attempt to dismantle imperialism in 1919—has been for great powers to act through international organizations when intervening in other countries. George H. W. Bush understood the need for collective action in the Gulf War. Five years before his son invaded Iraq, Bush wrote:

I firmly believed that we should not march into Baghdad. . . . To occupy Iraq would instantly shatter our coalition, turning the whole Arab world against us, and make a broken tyrant into a latter-day Arab hero . . . assigning young soldiers . . . to fight in what would be an unwinnable urban guerrilla war.

Bill Clinton also understood the importance of collective action. That’s why he insisted on acting through NATO in the Balkans. If the United States had acted alone, it could have sparked a war of national liberation that might still be going on. (The British military historian Michael Howard is said to have remarked during the 2003 Iraq War that it was fortunate that the United States had lost the Vietnam War, because if it hadn’t, it might still be there.)

Sestanovich, on the other hand, points with favor to Acheson’s skepticism about the United Nations and Reagan’s dissatisfaction with his European allies. And he misunderstands George H. W. Bush’s commitment to collective security. He writes that Bush “managed to mobilize a global coalition without really limiting American freedom of action.” But in fact, Bush’s collective commitment did limit American action—and greatly to America’s benefit. When America has abandoned this strategy for some version of unilateralism, as Johnson did in Vietnam or George W. Bush did in Iraq (where Washington’s only significant ally was the former imperial power in the region), the United States has provoked a nationalist backlash. Erstwhile villains have been turned into martyrs. And American forces, hopeful to be seen as “liberators,” have become seen instead as imperialists.

Sestanovich is right, of course, in saying that a policy of retrenchment can lead to failure. Carter’s attempts to reach accords with the Soviet Union may have convinced Moscow that it could meddle in Africa without repercussions. In his first two years, Clinton’s attempt to steer clear of international conflict contributed to massacres in Bosnia and Rwanda that probably could have been avoided with a minimal show of American determination.

But the history of retrenchment, like that of maximalism, is studded with successes as well as failures. Eisenhower’s winding down of the Korean War, Nixon’s opening to China and his closing of the gold window, Reagan’s belated decision in his second term to wind down American intervention in Central America and George H. W. Bush’s decision not to invade Iraq have to be counted as successes that were based upon a recognition of the limits of American power.

WHAT I WOULD conclude from this mix of successes and failures is that the difference between maximalism and retrenchment is not the most telling way to divide the history of American foreign policy since World War II. American policy makers have debated what to do along these lines, but the debate has often been muddled. The debate between Kennan and Lippmann over how to respond to the Soviet threat—with Kennan initially prescribing aggressive “counterforce” around the globe, which Lippmann considered entirely unnecessary and dangerous—was really about Soviet intentions. Lippmann and his successors did worry about America turning into a militarized society, but they would not have expressed these concerns if they didn’t disagree with the prevailing “maximalist” view of the kind of threat that the Soviet Union, Communist China, a Communist Vietnam or Saddam Hussein’s Iraq posed.

It is also hard to draw a sharp line between administrations that practiced maximalism and those that practiced retrenchment. Sestanovich concedes that George H. W. Bush’s and Clinton’s administrations represented a mix of the two approaches, but that is also true of many other administrations as well. Kennedy stared down the Russians during the Cuban missile crisis, but afterward signed the Limited Test Ban Treaty; he also agreed to a neutralized Laos. Nixon, the retrencher, tried to secure a graceful exit from Vietnam, but he attempted to do so initially by winning the war—a strategy that Sestanovich himself describes as “maximalist.” Reagan is Sestanovich’s archetypical maximalist, but his courting of Soviet leader Mikhail Gorbachev and his advocacy of nuclear abolitionism can be construed as retrenchment as well as maximalism. His withdrawal of support for the contras in Nicaragua—which the conservative advocates of maximalism loudly denounced—could also certainly be interpreted as an act of retrenchment.

What Sestanovich seems to have done is to project the difference he sees in America’s approaches to the Soviet Union, typified by the difference between Carter before 1979 and Reagan, onto the entire history of foreign policy since World War II. He also seems to have endorsed the neoconservative excuse (it’s all Rumsfeld’s fault) for the failure of the George W. Bush administration’s invasion of Iraq, as well as the neoconservative critique of George H. W. Bush for not going to Baghdad and provoking a decade-long guerrilla war. That leads Sestanovich—without saying so in so many words—to mount a one-sided defense of “muscular” and sometimes unilateral foreign-policy initiatives and to reject policies that suggest the limits of American power. That’s not helpful, particularly in guiding foreign policy now.

Sestanovich sees Barack Obama as an advocate of retrenchment. That’s certainly true in some respects. Obama has had to dig America out of the hole in the Middle East that George W. Bush’s invasion of Iraq created. He has had to govern on behalf of an American public skeptical about the use of American force overseas except in obvious cases of self-defense. And he has had to face Republican opposition to government spending, including military spending. These factors certainly reinforced Obama’s decision to withdraw from Iraq and to limit America’s intervention in the Arab Spring, most recently in Syria’s civil war.

But Obama, like his predecessors, has also been faced with having to come to terms with situations in Iraq, Iran, Egypt, Syria, Afghanistan and Israel/Palestine, as well as in China/Taiwan and North Korea, where the scars from the long history of Western and Japanese colonialism are still visible. Sestanovich is critical of Obama for undermining the effort at nation building in Afghanistan by setting a deadline for withdrawal, but Obama’s real mistake may have been in listening too closely to the advocates of counterinsurgency (the heirs of Maxwell Taylor in Vietnam) who wanted him to commit the United States to long-term intervention. And Obama’s greatest success may come in defying the neoconservatives and America’s Israel lobby by extending a hand to Iran’s rulers.

Is Obama in these cases “retrenching,” or is he displaying a better understanding of the conflicts that have divided the world for a century? Sestanovich wants to see American foreign policy in the light of cycles of retrenchment and maximalism; I prefer to see it as two long twilight struggles—one to wage the Cold War and the other to come to terms with the turmoil unleashed by the age of imperialism and nationalism. The United States has won the Cold War, but in the Middle East, Africa, South Asia and the Far East the other struggle is far from over.

John B. Judis is a senior editor at the New Republic and the author of Genesis: Truman, American Jews, and the Origins of the Arab-Israeli Conflict (Farrar, Straus and Giroux, 2014).

Pullquote: The history of retrenchment, like that of maximalism, is studded with successes as well as failures.Image: 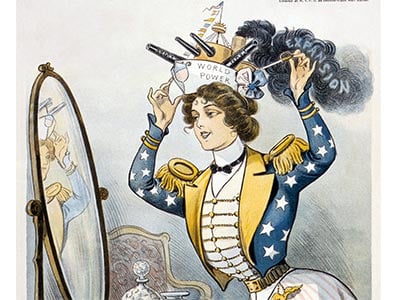