Next Year in Jerusalem!

[amazon 0297852655 full]WHERE I (partly) grew up, in the Mekor Hayim and Rassco neighborhoods, it wasn’t really the Jerusalem of history. The western half of the town, which Israel controlled and which, for most of the time, served as the Jewish state’s capital, was a sleepy, untouristy, provincial backwater with barely a holy site or archaeological ruin worthy of the name. The one English-language bookstore, at the bottom of Shamai Street, which sold both new and secondhand books, could have featured in a small English town, say Luton in the 1950s (and, indeed, its quiet, bespectacled owner, a yekke, eventually drifted off to Australia, perhaps like some Lutonites). The restaurants closed on Friday afternoon and reopened on Saturday night or Sunday at midday; a soldier on weekend leave could barely find a place, outside his home, to go eat.

Then came the Six-Day War and everything changed. Jerusalem was, in the Israeli government’s phrase, once again “united,” reverting to its former glory (or notoriety) at the center of the world, the holy city of the three monotheistic religions, the prize and bane of never-ending regional and imperial conflicts. Montefiore has described it, in various places, as “the cockpit of the Middle East” and “the battlefield of Western secularism versus Islamic fundamentalism,” “in the crosshairs” of a variety of conflicts and visions. It is a city awash in history: the ruins, layer upon layer, of Judaean and Roman Jerusalem, and subsequent Arab, Persian and Ottoman constructions; the Temple Mount, set upon the rock and hill on which Abraham had almost sacrificed his son Isaac, on which the Jews had built their temples, Christ had disdainfully confronted priests and money changers, and Muhammad had, at least in dream or vision, ascended to the seventh heaven; the Old City’s sixteenth-century walls, encompassing Golgotha and countless tombs—of Christ and Husayn ibn Ali, the king of Hejaz, to name just two; and the burial places outside, of Queen Helena of Adiabene, of Theodor Herzl, political Zionism’s founder and prophet, and of Yitzhak Rabin.

This is the grist of Montefiore’s highly readable, highly enlightening mill. He takes us, systematically and anecdotally, through the ages of Jerusalem, sketching miniportraits of the successive, often bestial, sometimes winning protagonists, from the first Davidian kings through the crusader conquerors and their Muslim nemeses, Saladin and Baibars, to the Ottoman sultans and the British governors, down to the Palestinian chieftains and Zionist settlers—who are, for the time being, victors. Montefiore devotes a great deal of space to the evolving physical contours of the town, which was constantly expanding and contracting, and to its architecture, buildings rising and falling. Archaeology buffs will find a great deal of illumination in these pages.

Montefiore bases his text on the available written records (histories, both classical and recent, travelogues by visiting Muslim and Christian writers and scholars, and contemporary memoirs) and on archaeological discoveries. He gives a great deal of credence to the Biblical narratives in reconstructing the city’s history during its post-Jebusite first six hundred years (roughly 1000–400 BC).

What emerges is a bloody tale of politics and religion in which sets of peoples and leaders successively battle over the town for three millennia. In the penultimate scene in Ridley Scott’s take (Kingdom of Heaven, largely filmed, incidentally, in Morocco) on one of these struggles between the twelfth-century Christian crusaders and the Muslims, he has the Christian commander, Balian of Ibelin (Orlando Bloom), ask Saladin (Ghassan Massoud), who is about to enter the city as conqueror, what Jerusalem’s “worth” is to him. The Kurdish Egyptian general responds: “Nothing”—and, after a pause—“Everything.” The glib exchange sticks in one’s mind. But in reality, Montefiore’s pages demonstrate that most everyone throughout history believed that “everything” was the only possible answer.

Which, in a sense, brings us to the present and its politics, to which Montefiore devotes (I think rightly—this is a history, not a political tract) relatively little space.

JERUSALEM FIGURES large as an issue, and obstacle, in Israeli-Palestinian (and Israeli-pan-Arab) peacemaking. Montefiore is balanced and fair. Though I’m not sure it was the 1967 conquest and, since then, “possession of Jerusalem” that “gradually changed Israel’s ruling spirit, which was traditionally secular, socialist, modern” as Montefiore claims. Rather, it was demography and unrelenting Arab rejectionism that brought this about, coupled with the fillip of the return to Jewish control of that crucible of Judaism, Judaea and Samaria, of which East Jerusalem is a key part.

But he is right that concretely taking possession of the holy city and its sites—the Wailing Wall, to which the Jordanians denied Israelis access during their two decades of rule; the Temple Mount and the Jewish Quarter of the Old City; the City of David; the slopes and pool of Silwan/Shiloah and, to its east, the Mount of Olives with its Jewish graveyard—made Israeli indifference to the fate of East Jerusalem much less likely.

Yet in July 2000, Israeli Prime Minister Ehud Barak “boldly”—as Montefiore rightly puts it—offered the Palestinians a reasonable two-state deal, which involved Arab control of parts of East Jerusalem, including over three-quarters of the Old City (the Christian, Muslim and Armenian quarters), with the Temple Mount under Palestinian “sovereign custodianship.” Yasser Arafat, the Palestinian leader at the time, said “no.” American President Bill Clinton then bettered the offer in December, with his “parameters,” awarding the Palestinians sovereignty over the Temple Mount though leaving the Israelis some form of control of the earth beneath the surface (the substratum presumably containing the remains of the First and Second Temples—the original, built by King Solomon, housed the Ark of the Covenant and was destroyed by Nebuchadnezzar; its successor was razed by the Romans). Archaeologists have never been allowed to plumb the depths of the mount because of Muslim objections. Clinton also consigned all of the Arab-majority sections of Jerusalem to Arab sovereignty (with areas with Jewish majorities remaining under Israeli control). More widely, Clinton increased the portion of the West Bank to go to the Palestinians (from the 91 percent offered by Barak to the even greater 94–96 percent). This meant, in effect, that the West Bank, minus some border-hugging Israeli settlements, would be part of the Palestinian state, with Israel compensating the Palestinians for the ceded territory with land of its own. To this proposal Barak grudgingly agreed; Arafat again said “no.” Arafat, of course, also demanded Israeli acceptance of the “right of return” of the Palestinian refugees from 1948, which Israel rejected.

Now alongside that political “no,” Arafat added a historical—or perhaps ideological—“no”; he denied, to the incredulous Clinton and Barak, that any Jewish temples had ever adorned the Temple Mount, thus denying the reality of Jewish ties to Jerusalem and the legitimacy of Jewish claims to the city and, by extension, to any part of Israel/Palestine. Which gives rise to the suspicion that Arafat’s “no” had nothing to do with the details of the offer but was a principled rejection of a two-state compromise.

MONTEFIORE IN effect endorses the Barak-Clinton formula for resolving the problem of greater Jerusalem, with its current population of just over 780,000 (of whom 265,000 are Arabs and 164,000 ultra-Orthodox Jews). He also makes a powerful case for Jerusalem as one of Islam’s holiest cities (especially during the Middle Ages) despite the fact that the name of the city nowhere appears in the Koran. (Over the centuries, the city’s importance in Islam increased as others coveted and assailed it, and waned when it was uncontestedly in Muslim hands.)

For peace to take hold, however, almost all West Bank Israeli settlements would need to be evacuated. He grants that Israeli rule in the city itself was “uniquely impressive by historical standards, as guardian of a Jerusalem for all faiths.” But in an Israeli-Palestinian deal, it must, somehow, serve as the capital of both the Jewish state and an emergent Palestinian Arab state, with the “Arab suburbs . . . Palestinian” and the “Jewish suburbs . . . Israeli”—Montefiore here is quoting current Israeli President Shimon Peres.

As to the Old City—the principal “challenge,” as Montefiore, quoting Shimon Peres again, puts it—it should be “a demilitarized Vatican, policed by joint Arab-Israeli patrols or an international trustee.” Perhaps the committee could be comprised of NATO and Russia. The problem would then remain the Temple Mount, which Montefiore says cannot be internationalized; nor can it be retained—in terms of sovereignty—by Israel (the Arabs would resist) or transferred to the Arabs (Israel would resist). Similarly, the site is difficult to physically divide, the Wailing Wall being part of the mount’s surrounding structure. In line with the Clinton parameters, Montefiore essentially returns to the formula of the surface area, with the Dome of the Rock and Al-Aqsa Mosque going to the Arabs and the interior of the mountain (theoretically) remaining under Israel’s control.

But he concedes that the real problem remains psychological, one of mutual trust, which one hundred years of conflict, and decades of Arab suicide bombing and Israeli rule and oppression, have undermined (perhaps definitively). While most Arab historians know that Arafat’s dismissal of Jewish history, as well as the Jewish linkage to the Holy Land and the Temple Mount, is absurd, they lack the courage (or political will) to publicly question it. But Montefiore seems to believe that the psychological barrier, often translated into a mutual rejection of each other’s historical narratives, can be overcome. Or, rather, that it must be if peace is to be achieved.

Pullquote: The real problem in peacemaking is one of mutual trust, which decades of Arab suicide bombing and Israeli rule and oppression have undermined (perhaps definitively).Image: 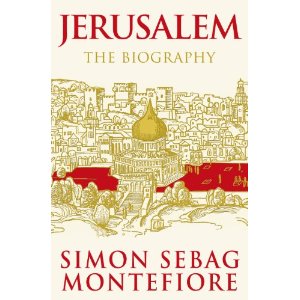