[amazon 0670022950 full]WITH THE United States fighting two wars, countries from Tunisia to Syria either in or on the brink of intrastate conflicts, bloodshed continuing in Sudan and reports that suicide bombers might foil airport security by planting explosives within their bodies, it is hard to be cheerful. But Harvard psychologist Steven Pinker tells us that we should be, that we are living in the least violent era ever. What’s more, he makes a case that will be hard to refute. The trends are not subtle—many of the changes involve an order of magnitude or more. Even when his explanations do not fully convince, they are serious and well-grounded.

Pinker’s scope is enormous, ranging in time from prehistory to today and covering wars (both international and civil), crime, torture, abuse of women and children, and even cruelty to animals. This breadth is central because violence in all of these domains has declined sharply. Students of any one of these areas are familiar with a narrow slice of the data, but few have stepped back to look at the whole picture. In fact, many scholars and much of the educated public simply deny the good news. But prehistoric graves and records from twentieth-century hunter-gatherers reveal death rates due to warfare five to ten times that of modern Europe, and the homicide rate in Western Europe from 1300 to today has dropped by a factor of between ten and fifty. When we read that after conquering a city the ancient Greeks killed all the men and sold the women and children into slavery, we tend to let the phrases pass over us as we move on to admire Greek poetry, plays and civilization. But this kind of slaughter was central to the Greek way of life.

Implicit throughout and explicit at the very end is Pinker’s passionate belief that contemporary attacks on the Enlightenment and modernity are fundamentally misguided. Critics often argue that material and technical progress has been achieved without—or even at the cost of—moral improvement and human development. Quite the contrary, he argues; we are enormously better than our ancestors in how we treat one another and in our ability to work together to build better lives.

To make such bold and far-reaching claims, one must draw on an equally vast array of sources. And so Pinker does. The bibliography runs to over thirty pages set in small type, covering studies from anthropology, archaeology, biology, history, political science, psychology and sociology. With this range comes the obvious danger of superficiality. Has he understood all this material? Has he selected only those sources that support his claims? Does he know the limits of the studies he draws on? I cannot answer these questions in all the fields, but in the areas I do know—international relations and some psychology—his knowledge holds up very well. With the typical insider’s distrust of interlopers, I was ready to catch him stacking the deck or twisting arguments and evidence about war. While he does miss some nuances, these are not of major consequence. It is true that despite the enormous toll of World Wars I and II, not only have there been relatively few massive bloody conflicts since then (and an unprecedented period of peace among the major powers), but the trends going back many centuries reveal a decline in the frequency of war, albeit not a steady one. The record on intrastate conflicts is muddier because definitions vary and histories are incomplete, but most studies reveal a decline there as well. In the aftermath of the Cold War, civil wars broke out in many areas, and some still rage (most obviously in Congo), but, contrary to expectations, this wave has subsided. In parallel, Pinker marshals multiple sources using different methodologies to show that however much we may fear crime, throughout the world the danger is enormously less than it was centuries ago. When we turn to torture, domestic violence against women, abuse of children and cruelty to animals, the progress over the past two millennia is obvious. Here what is particularly interesting is not only the decline in the incidence of these behaviors but also that until recently they were the norm in both the sense of being expected and of being approved.

In all these diverse areas, then, I think Pinker’s argument holds up. Or, to put it more cautiously, the burden is now on those who believe that violence has not declined to establish their case. (Whether our era sees new and more subtle forms of violence is a different question and I think would have to involve the stretching of this concept.) We often scorn “mere” description, but here it is central. The fact—if it is accepted as a fact—that violence has declined so much in so many forms changes the way we understand our era and the sweep of human history. It shows how much our behavior has changed and that even if biology is destiny, destiny does not yield constant patterns. It also puts in perspective our current ills and shows that notions of civilization and progress are not mere stories that we tell ourselves to justify our lives.

So why has all this good news generally gone unrecognized, and why do many people believe that our age is unprecedented in its bloodiness? One reason Pinker notes is the tendency to whitewash history. Myths of a better time in the past and portrayals of our current era as degraded are common among social critics on both the left and right to goad us into shame—and action. Our understanding of the massive slaughter and oppression levied by the dominance of the Western world over less modern civilizations has magnified this propensity, and stressing how much violence there was in earlier times, and in some contemporary non-Western societies, seems to stereotype Others as barbarians. Ironically, the liberal worldview that Pinker credits with so much of our progress involves a sensitivity to our current and previous sins that encourages viewing distant societies such as the American Indians not only more favorably than we did until recently but also more favorably than is warranted.

Related to this, the somewhat cynical spirit of our age makes us suspicious of claims about progress in human behavior, especially because the plethora of such claims by Western thinkers like Herbert Spencer and even Max Weber in the nineteenth and twentieth centuries failed to foresee the cataclysms that were to come and appeared to justify the dominance of racism and sexism around the world. It is all too easy for any of us to imagine how we could be ridiculed, generations from now, for our naïveté and unwitting complicity in a new malign order.

The recent past too seems to make a mockery of Pinker’s argument. Just to mention the names of Hitler, Stalin and Mao is to make us cringe at the thought of progress. Although the world has seen nothing so horrific since then, readers of this journal will be familiar with the wars between Iran and Iraq and between Eritrea and Ethiopia, and any day’s newspaper reveals numerous incidents of bloodshed. Since they are happening now, they are very vivid, which makes it hard to maintain a sense of proportion. Reading about the latest school massacre or serial killer grabs our attention more than the drab long-run statistics. Even if we are aware of the terrors of the distant past, we do not feel them in our gut.

The wars of the twentieth century and the domestic mayhem caused by those tyrannical leaders will lead many to ask how previous eras could conceivably have witnessed as many casualties at the hands of oppressors or at the point of a gun. Well, they didn’t. But Pinker argues that what is important for understanding social processes is not the absolute number of deaths but their proportion of the world’s population, which has greatly increased over time. To some, this will seem like a sleight of hand. In what way do tens of millions of deaths in wars and attempts to remake societies become less significant because of the rise of world population, including in continents far distant from these atrocities? Morally, they do not. But if one wants to use body counts as a way to understand the extent of violence in the world, proportions and ratios are a better measure than absolute numbers.

Is it also appropriate to point to the lack of a war between the United States and the USSR as evidence of growing peacefulness? The Cold War of course saw American troops fighting in Korea and Vietnam, not to mention numerous smaller proxy wars. These were not large enough to move the needle on Pinker’s scale, but a nuclear war would have been. Pinker briefly notes many of the arguments for why this did not occur, but to the extent that peace was maintained by the fear of total annihilation, one can certainly question how we should enter this period into our balance sheet. If we think that we were playing Russian roulette, then the fact that we were lucky does not count quite so strongly for our living in a less violent time. 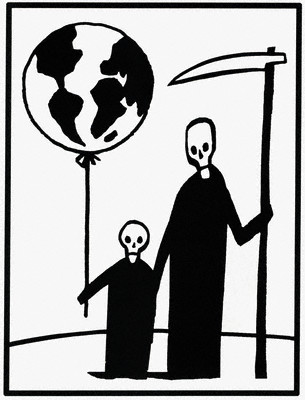