THE IRON Curtain is one of those metaphors that continue to chill the spine. Winston Churchill famously used it in his Fulton, Missouri, speech in March 1946, and he often is credited with inventing it. In fact, the Nazi ideological leader, Joseph Goebbels, had used it in the previous year as the Red Army sped toward Berlin, and the Nazis sought to instill a determination among Germans to resist until the bitter end. But Goebbels was not the inventor either. As far as can be established, the first use of this figure of speech occurred in 1920, in a book by British Labour Party luminary Ethel Snowden. She had gone to Soviet Russia on a fact-gathering mission and returned to London with a harrowing account of conditions there. The Russian Communist regime was not the superpower it was to become by the end of the Second World War. Its economy was in ruins, and its armed forces would have lost any war with Western nations. Snowden’s Iron Curtain was a reference to the barrier of communication between Russia and the West. On both sides there was a shortage of information, and she hoped to fill the void with her book. Anne Applebaum writes about a curtain that was manned by tanks and held in place by walls and barbed wire. And by 1949, the Soviet Union had acquired atomic weapons and rapidly was developing aircraft that could deliver them deep into the Continent. One of the merits of her book is her theme of ideas and their dissemination. Studies of communization in Eastern Europe have traditionally focused on political manipulation, deceit and terror. Applebaum does not stint in exploring these phenomena. But she goes beyond them, also discussing subjects that often get overlooked, including radio, the press, churches and recreational clubs. Even the YMCA and the Boy Scouts get attention.

Her purpose is to show that the imposition of Communism in the countries she studies—East Germany, Hungary and Poland—started as soon as the Red Army and the Soviet technical staff arrived. The process was intensified in 1948, as Hugh Seton-Watson’s classic account, The East European Revolution, points out. The catalyst for Stalin’s command that the USSR’s outer empire should undergo a thorough political transformation, in Seton-Watson’s view, was the American decision in 1947 to offer massive financial assistance to those European states willing to accept a few basic conditions. Chief among these was a commitment to the rule of law, free trade across frontiers and access for American businesses. Stalin could see that the Marshall Plan was designed, effectively if not expressly, to exclude the Soviet Union. Now that he clearly was never going to obtain the loan he had desired for the postwar economic reconstruction of Russia and Ukraine, he laid down the rule that no country in Eastern Europe should take up America’s aid offer. When the Czechoslovak cabinet went to Paris and talked to American officials about how to receive the money from across the Atlantic, a summons arrived from Moscow. Stalin personally growled his displeasure at this impertinent lapse from usual procedures. Everything in Prague must be coordinated with the Kremlin dictator’s wishes.

Applebaum’s analysis coincides with the Seton-Watson thesis that Stalin and his stooges always had plotted to accomplish the reproduction of the Soviet model across the region. Seton-Watson harbored Communist sympathies in his youth and gained some experience of Soviet-style procedures. But he soon abandoned Communism and at war’s end observed with horror the military and political subjugation of Eastern Europe. He concluded that communization had been organized according to a staged pattern. Moscow’s thinking was discernible behind veils of subterfuge as coalition governments and pseudodemocracy gave way to one-party police states. Seton-Watson reported the ineffectual protests of Western officials in the Allied Control Commissions and surveyed the imaginative pretexts for repression adduced by national Communist leaders such as Hungary’s Matyas Rakosi, East Germany’s Walter Ulbricht and Poland’s Boleslaw Bierut. The march on power followed a carefully prescribed route.

This analytical framework explaining communization in Eastern Europe fell under criticism as contradictions in the empirical data emerged. The processes were not the same in all countries, and they did not unfold in the same time frame. For example, some countries acquired collectivized agriculture, but Poland didn’t. Whereas the Catholic Church was systematically pummeled in Hungary, the Polish Communist authorities preferred to compose a concordat with the nation’s ecclesiastical hierarchy. In Czechoslovakia there were show trials of leading Communists unmasked as spies. This did not happen in East Germany or even in Poland, where the first postwar Communist leader, Wladyslaw Gomulka, was arrested and beaten up but not dragged into court and forced to confess to fictitious charges.

It also has been pointed out that Stalin desisted from chancing his arm in Finland. Though Finland had been friendly toward Nazi Germany during the war, the USSR contented itself with demanding territorial concessions and geopolitical guarantees from a country that it had sought to turn into a Soviet republic during the 1939–1940 Winter War. This also is what it meted out to Estonia, Latvia and Lithuania in 1940 and again in 1944. Thus, it was argued that Stalin was a reasonable and flexible fellow. The Finns agreed to move their border northward away from Leningrad and to remain neutral in the rivalry between NATO and the Warsaw Pact, and Stalin concluded Finland’s independence would bring no harm to Soviet security interests. The idea has gained ground that he might well have been open to a less repressive settlement for Eastern Europe if only the Western Allies had handled him with greater respect and understanding. Poor old Joe! Misunderstood and unappreciated, so the argument goes, he allowed the balance of governance to swing in the direction of outright communization. The chances for the USSR to dominate Eastern Europe without entirely suppressing its limited democracy and market economy evaporated in the heat of the Marshall Plan.

IRON CURTAIN will have none of this. The author contends that the communizing process began as soon as the Communist leaders who had lived as political refugees in Moscow since the 1930s returned to the lands of their birth with the Red Army. Rejecting Seton-Watson’s stages of communization, Applebaum starts her book with an exposition of the preparatory groundwork for later communization, a process that was well under way in the last year of the Second World War. The core of her argument is that Communist returners did not confine themselves to assuming power in ministries of internal affairs but immediately sought to impose their influence on the minutiae of everyday life. Communization was dreamed up not in 1947 or 1948 but in 1945 or still earlier.

Applebaum rams home this argument with meticulous attention to the training courses given to the returners. On the banks of the Volga River, as the war turned in favor of the USSR, schools were created to educate young national recruits in the techniques that would be needed to root out opposition to Communism. The human material available to create a new Communist nomenklatura was far from promising. The recruits were not volunteers; they were conscripted. They were not told why they were transported to the Volga schools, and when they reached them, they were subjected to repeated interviews so that their ideological reliability could be assessed. Usually they belonged to families of Communist refugees who had fled to the USSR from persecution in Eastern Europe. Such families had lived in fear of liquidation in the Great Terror of 1937–1938. Not all the recruits had emerged from this frightening way of life with a basic education. Indeed, they felt lucky to be alive. And most cooperated eagerly with their lecturers. The forerunner to the KGB, the People’s Commissariat for Internal Affairs, had developed a set of refined techniques to repress any unruly nation. Police training in Volga schools raised up a cohort of Poles, Hungarians and Germans who were ready to initiate and complete the communization of their native lands.

But this general objective was not unique to Stalin’s period of rule. Under Lenin, too, foreign Communists were trained and indoctrinated at party schools to ready them for revolutionary campaigns at home. In July 1920, at the end of the Russian Civil War, Lenin threw the might of the Red Army into Poland. The goal was Communist revolution across Europe. Germany was the great prize. The Communist International, meeting in congress in Russia, sent national delegates back home to foment uprisings throughout the Continent. Lenin spoke casually about the need to “Sovietize” country after country. The Polish armed forces held firm in Warsaw and defeated the Red Army in the battle of the Vistula in August 1920. But the idea of spreading revolution did not die. When Stalin ordered the campaign against Finland in 1939–1940, he was applauded by his archenemy Trotsky for trying to do to the Finns what he and Stalin had attempted in Poland. Soviet Communist rulers felt more secure in world politics if they could expand the territory dedicated to the achievement of Communism. Such objectives deserve emphasis, and Applebaum’s book scores well on this matter. 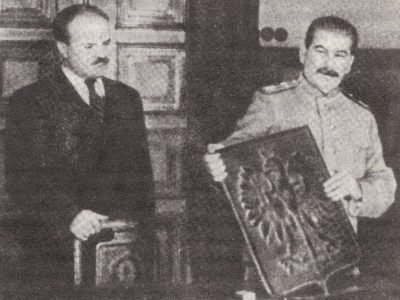