Schemes That Set the Desert on Fire

As the maps were drawn, France got Syria and Lebanon, while Britain got Jordan, Iraq, Saudi Arabia and a Palestine that it had effectively pledged to two sides, Arabs and Jews.

BARR’S NARRATIVE rolls on toward the present in a series of freeze-frame images that prefigure our current problems. As the colonialists try to impose their will in Iraq and elsewhere on Arabs who think they have been promised independence, they are met with riots, assassinations and an early version of the roadside bombs we now call IEDs. The Westerners respond, again in ways that prefigure our times, with their own brutalizing tactics, which include night raids, targeted killings and torture.

Lebanon, then as now, was the scene of near-constant machinations by the imperial powers. The British recruited the Druze as secret allies; the French operated mostly through the Maronite Christians. These games continued through the 1920s and ’30s, but they became truly fratricidal during World War II, when Lebanon was knocked back and forth like a ping-pong ball between the British, the Free French forces of Charles de Gaulle and the Vichy-installed government in Beirut. The first two engineered Lebanese independence in 1943 to pry the territory from Vichy and the Germans. But a vicious fight then ensued between the British candidates for president and prime minister, Bechara al-Khoury and Riad al-Solh, respectively, and their French rivals. There was a brief pro-French coup before Khoury and Solh prevailed.

The jockeying in Lebanon was a metaphor for the larger tensions between Winston Churchill and de Gaulle. Barr quotes one sputtering Churchill missive after receiving a report from Lebanon: “I had no idea the French were behaving so tyrannically.” It was a measure of the British genius at “divide and conquer” that they were able to work their will even in Lebanon, a country that the French had passionately colonized. But the French would have their revenge, in Palestine.

We come now to the most sensational revelation of the book—the secret French intelligence role in assisting two Jewish terrorist groups, the Irgun Zwai Leumi and the Stern Gang, in their battle to drive out the British from Palestine and establish the state of Israel.

As early as 1920, Jewish calls to implement the promise of the Balfour Declaration had been met by Arab riots, leading a British general, Sir Henry Wilson, to observe: “The problem of Palestine is exactly the same . . . as the problem of Ireland, namely, two peoples living in a small country hating each other like hell.” A commission headed by Lord Peel in 1936–37 and a later one headed by Lord Moyne both recommended that Palestine should be partitioned between Arabs and Jews, but neither specified how or when.

The complications in Palestine intensified as the horrors of Nazi Germany encouraged more Jews to emigrate. The British tried to block the flow of desperate refugees in ways that today seem unconscionable. The Jews of Palestine, believing that they had been promised a homeland, agitated for Britain to deliver on its pledge. The British, trying to placate the Arabs (and thereby protect the region’s two strategic prizes, the Suez Canal and the oil of the Persian Gulf), kept resisting Jewish demands for statehood. The Jews began to turn to terrorism, the weapon of choice in the region, to force the British out of Palestine. And here the French saw a chance to get even.

According to Barr, the French consul in Jerusalem was contacted in February 1944 by representatives of the Irgun and Stern Gang and told of the Jewish groups’ “declaration of war” against the British. Around the same time, according to Barr, a Free French intelligence cell known as the Bureau Noir, whose job was to stem British influence in the Levant, began working with the Jewish underground. Barr cites a 1944 mi6 report “that the Bureau Noir was backing Jewish terrorists” and a 1945 mi5 report that the terrorists “would seem to be receiving support from the French,” including weapons.

Barr quotes this incendiary statement by Churchill in 1944, after Lord Moyne was assassinated by the Stern Gang:

If our dreams for Zionism are to end in the smoke of assassins’ pistols and our labours for its future are to produce a new set of gangsters worthy of Nazi Germany, many like myself will have to reconsider the position we have maintained so consistently and so long in the past.

The quotation bristles with indignation, but it was unworthy of Churchill. It makes a mistake that is characteristic of many anti-Israel fulminations of today. The Stern Gang was a small, superextremist faction, and it did not represent mainstream Zionism any more than do extreme right-wing parties in Israel today. As for Churchill’s comparison to Nazi Germany, it was wrong—morally, historically, in every way.

But the Zionist terrorist campaign was brutal and effective. The July 1946 bombing of the King David Hotel by Menachem Begin’s Irgun is well known, but it was only one instance of a sustained and well-organized campaign that included bombing a British officers’ club, a refinery and railroads as well as a bold attack on a prison in Acre that freed Arabs and Jews alike. When the British wanted to publish photographs of the terrorist leaders, the newspaper publishers were intimidated into refusing; when the British tried some grim, quasi-terrorist methods of their own, two British sergeants were hanged in public. It was a dirty war, and the British lost—and made what Barr says was the first forced withdrawal from empire since the eighteenth century.

Barr’s story ends with President Truman’s support for Israel’s independence, which was a decisive factor in the creation and viability of the Jewish state. That ends one story and begins another in the Middle East, whose chapters unfold year by year.

BARR’S BOOK makes riveting and sometimes haunting reading. It’s a book that, quite deliberately, uses the past as a provocation for the present. Readers cannot but wonder at the stories we seem condemned to relive, to our sorrow and chagrin.

I wish the rendering of history here had been a little less barbed; it makes me worry that the past is being mined selectively, for maximum effect. And though Barr does well to focus on some of the remarkable personalities, his narrative spans so many years that it inevitably is somewhat choppy and episodic. It covers much ground but lightly and, sometimes, with frustrating incompleteness. Readers who enjoy this book would do well to consult the pathbreaking 1989 study by David Fromkin, A Peace to End All Peace. Fromkin makes many of the same points, but he looks at the consequences of the Ottoman breakup through the more focused lens of the Versailles peacemaking.

So what do we take away from this provocative history? Each reader will have a different answer, but here’s mine.

First, the embrace of a Jewish homeland in Palestine in the Balfour Declaration created problems that were foreseen from the moment of its publication. These problems can be resolved only through creation of a Palestinian Arab state that, in effect, partitions the Holy Land so that both Arabs and Jews can live there peacefully. This is especially urgent now, for the interests of Israel as well as for those of the Arabs. Indeed, the Zionist dream is best protected (and guaranteed for the future) by the existence of this very Palestinian state. In that sense, Israel has no more urgent security requirement than to negotiate the establishment of a Palestinian state, even if that requires politically painful concessions on Jerusalem and other issues.

Second, the tale of British and French manipulation told in these pages helps us to understand why the Arab Spring is so important and valuable. Arabs are not wrong to see their history as a story of manipulation by others; that process is described page by page in this book. The revolutions now under way in Egypt, Syria and elsewhere are about dignity and self-determination—about a people, used and abused by others, finally taking control and beginning to write its own history. It shouldn’t surprise us if this process is unstable and, in some aspects, anti-Western. The screw has been tightened for nearly a century—far longer, if you include the epoch of Ottoman domination. The unwinding won’t be flowers and parades, but it will produce a political culture in which the tedious arguments about victimization are, finally, used up.

David Ignatius is a foreign-affairs columnist at the Washington Post and the author of eight novels.

Pullquote: Barr's book quite deliberately uses the past as a provocation for the present. Readers cannot but wonder at the stories we seem condemned to relive, to our sorrow and chagrin.Image: 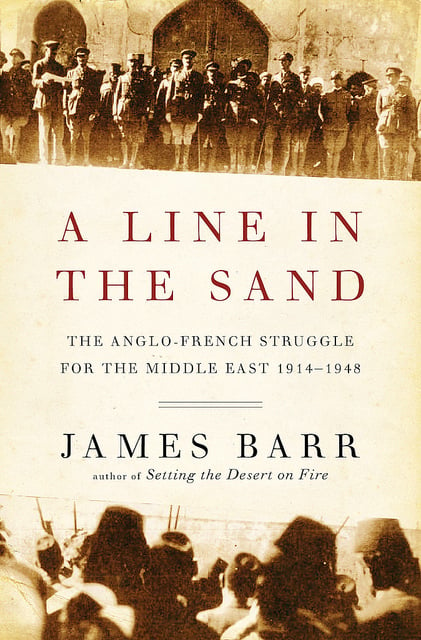