Somewhere, beyond the Sea

Take Francis I, king of France (1494–1547), at loggerheads with Charles V, the Holy Roman Emperor (1500–1558), who was busy fighting the Turks. Francis goaded the beys in Tunis to send corsairs against the Kingdom of Naples and supplied the Muslims with cannons to reduce the Spanish fort in Algiers. In 1543, a French ambassador “accompanied [the Muslim] Hayrettin’s fleet as it savaged the coasts of southern Italy, carrying off the daughter of the governor of Reggio.” The king even allowed the Turks to use Toulon for a winter bivouac; with thirty thousand Turks dispersed in the town, the cathedral “was [temporarily] transformed into a mosque.” Meanwhile, the Turks made expeditions into the countryside to lay hold of young peasants to sell off as slaves.

Still, Christian and Muslim rulers continuously fought, with the Mediterranean serving as a major battlefield. Abulafia rightly pinpoints as crucial the late sixteenth-century engagements at Malta and Lepanto in which the Ottoman Empire was decisively contained in its expansion westward. But when it comes to other episodes, Abulafia often pooh-poohs claims that Muslim-Christian clashes were driven by religious motives.

He may have it right when he asserts, quoting the historian Frank Lambert, that the American campaign against the North African Barbary pirates in the early nineteenth century was “primarily about trade, not theology.” But clearly theology, or straightforward religious-national hatreds, trumped commercial interests a century later when Turks slaughtered Armenians during World War I and subsequently killed hundreds of thousands of Greeks. No doubt, individual covetousness on the part of Turkish neighbors played a part, and Turkish leaders were interested, for nationalist reasons, in dispossessing and then replacing the Greek and Armenian middle classes with a new Turkish one. But the testimonies of Western, particularly German, witnesses at the time all point to religious antagonism as a key motivating factor.

Abulafia, reasonably, devotes far more space to the Turkish-Greek episodes (they inhabited the Mediterranean littoral) than to the Armenians (most lived, and died, in the interior of Asia Minor). And the Greeks—the descendants of the second- and first-millennium-BC Ionians and Black Sea settlers—also served between 1915 and 1923 as fodder for a harrowing and today largely forgotten tale.

The Greeks had been fighting the Turks on and off for years. The Turks wanted the Greeks out of Asia Minor (and, if possible, also out of the Aegean). The outbreak of World War I interrupted the low-key 1914 Turkish campaign to achieve that goal, but it was renewed a year later. Greece then joined the Allies and declared war on the Ottoman Empire in July 1917. By 1919, with the Turks out for the count, the Greek army occupied the port city of Smyrna and part of the Ionian coastline and then pushed inland, reaching the outskirts of Ankara. Economically and militarily overstretched, the Greeks proved unable to defeat the new nationalist Turkish army or to retain the lands they had occupied, and they were eventually driven back. Then came revenge. The Turks first destroyed the Greek communities along the Black Sea (Samsun, Ordu, Bafra) and then, in September 1922, reached the Ionian coast, with the Greek army and many Greek civilians from the interior retreating helter-skelter before their advance. The Greek troops boarded ships and departed for Piraeus. The Turks entered Smyrna, by then the chief Greek city, and torched the Christian quarters. Thousands were killed (the presence of Allied warships probably prevented a wider massacre). Within days, hundreds of thousands of civilians were evacuated to Greece—though tens of thousands were slaughtered (Abulafia says “something like 100,000”) and a similar or perhaps larger number were deported by the Turks inland, never to be heard from again. (During World War I and its aftermath, the Turks managed to perform a linguistic sleight of hand: “deportation” became synonymous with annihilation, something the Nazis later replicated.) The three-thousand-year-old Greek communities along the coast of Asia Minor and the Black Sea were thus erased, never to be resurrected. Today, only a small community of Greeks in Istanbul remains.

Abulafia blames the United States, Britain and France for Smyrna, saving only “twenty thousand” by placing them aboard Allied ships. He charges the Allied naval commanders—and, by extension, their governments—with “callousness.” And to be sure, everything bad he says about the American high commissioner and naval chief, Mark Bristol, and more, is justified. But the overall story, as illuminated by the contemporary documentation, is somewhat different. While understandably reluctant to go to war (again) with Turkey, the Allied naval teams performed in the Smyrna crisis with courage and humanity, orchestrating the withdrawal to safety of more than a quarter of a million Ionians, mostly on Greek ships, in one of the great maritime evacuations in history.

AND—I can’t restrain myself—one last point about Abulafia’s book in connection with the battle of cultures—and religions. One of its principal theaters in the twentieth century has been Palestine, where the Jews, seen by themselves and by their Arab neighbors as representatives and embodiments of the West, have repeatedly clashed with the country’s Arabs and the surrounding Arab world. The conflict is both political—over a patch of territory—and over values. Abulafia does not put the Palestine conflict in these terms, or, indeed, in any others, and devotes to it only a small amount of space, mostly by zooming in on the history of the seaside Arab town of Jaffa, on the site of a first-millennium-BC Philistine city, and the emergence of its Jewish neighbor, Tel Aviv, founded in 1909. Arab attacks on Jews by the late 1930s had turned Jaffa into an almost exclusively Arab place, but in April–May 1948 it was conquered by Jewish militiamen and almost all of its population fled to Gaza, the West Bank and Lebanon. The town was then co-opted by its larger Jewish neighbor, creating one municipal area designated “Tel Aviv-Jaffa.” While tens of thousands of Arabs inhabit Jaffa today, Arab Jaffa no longer exists.

Abulafia’s cool, evenhanded treatment of this microcosmic history leads to serious elisions that, to my mind, amount to distortion. He writes of the second bout of anti-Jewish rioting by the Arabs: “Outbreaks of violence between Jews and Arabs soured relations from 1921 onwards.” And of the 1936–39 Arab revolt against the British government and its Zionist wards, he writes: “The port of Jaffa serviced Tel Aviv until the outbreak of a new and even more serious round of violence in 1936.” Similarly, his succinct reference to the 1948 war also fails to attribute agency to any side—violence simply breaks out, no one starts it, no one is to blame.

As to Jaffa during the 1948 war, no context is provided. Abulafia tells us, simply:

Over a number of weeks in spring 1948, . . . tens of thousands of Jaffan Arabs fled by ship or overland. . . . The United Nations had designated Jaffa as an exclave of the proposed Arab state that would coexist with a Jewish state in Palestine. Following bombardment by Jewish forces in late April, the population of Jaffa dwindled.

No mention is made of the fact that the Palestinian leadership in 1947 rejected the partition resolution and launched, albeit inefficiently, a war to prevent its implementation; no mention of the fact that from November 30, 1947, the day after UN General Assembly Resolution 181 (partition) was passed, Jaffa’s militiamen daily assailed Tel Aviv with sniper and, occasionally, mortar fire and that the Jews finally attacked and conquered Jaffa after suffering these depredations for five months.

Abulafia writes well and offers up a comprehensive, fair-minded history. For those who can plow through 650 pages of historiography, this is a good read. And, occasionally, the prose is captivating. Abulafia has a good eye for quotes. Take Pharaoh Merneptah’s (thirteenth-century-BC) inscription at Karnak relating to his conquest and pacification of Canaan:

Men can walk the roads at any pace without fear. The fortresses stand open and the wells are accessible to all travellers. The walls and the battlements sleep peacefully in the sunshine till their guards wake up. The police lie stretched out asleep. The desert frontier-guards are among the meadows where they like to be.

Would that this were so today.

Benny Morris is a professor of history in the Middle East Studies Department of Ben-Gurion University of the Negev. He is the author of One State, Two States: Resolving the Israel/Palestine Conflict (Yale University Press, 2009).

Pullquote: What we have in The Great Sea is a history that emphasizes politics and warfare: these are the primary and most significant arenas of human agency—and the major vehicles of change.Image: 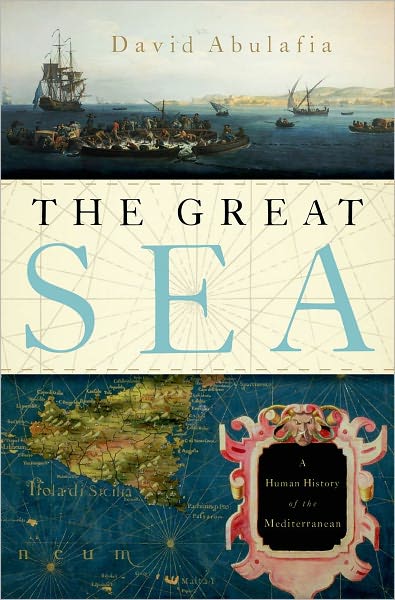