The Appeal of Decline; Review of Arthur Herman's The Idea of Decline in Western History

Is the West doomed to go the way of all other civilizations--into
history's bin? This question has preoccupied intellectuals, often in
the form of a meditation on the fall of Rome, ever since the
eighteenth century. More recently, it has become an instrument for
claiming political power; those who understand the causes of decline
must be given the power to avert it. Such understanding becomes a
revelation, a kind of gnosis, marking off an elect from those sunk in
quotidian triviality. Fascist doctrines obviously follow this model;
more egalitarian forms of salvation merely cover their tracks by
pretending that the elect act for the masses. But it takes a vanguard
of commissars, judges, bureaucrats, and others to equalize our modern
societies, and their work will never be finished.

The way you get elected to this elite is by reading books, and Arthur
Herman's The Idea of Decline in Western History is a splendid account
of what happens when human beings forsake common sense in favor of
exciting abstractions. The story of "declinism"--no doubt we have to
confront the idea in portmanteau terms as an "-ism"--is one in which
every refuted prophecy survives to be recycled in a new form. The
basic idea of decline invokes the most powerful of all social science
methodologies: the cycle. As Froude put it, echoing everyone from
Polybius to Machiavelli: "Virtue and truth produced strength,
strength dominion, dominion riches, riches luxury and luxury weakness
and collapse--fatal sequence repeated so often." The point of
understanding such cycles was, of course, to stop them revolving. The
theory of mixed government combined the virtues of monarchy,
aristocracy, and democracy in order to neutralize the vices each form
of government exhibited in its pure state. Everybody knew that
civilizations rose and fell. The nineteenth-century question was
whether the new and uniquely powerful European masters of the globe
could buck the cycle.

Their unique situation was the lack of any serious competitor since
the Ottomans had failed to take Vienna in 1683. Perhaps it is a law
of life that the level of anxiety in human affairs, like that of
happiness, remains relatively constant. Certainly, Europeans turned
their aggressions inward and began to worry about--or alternatively
to exult in--the prospect of their own destruction.

The commanding figure of the declinist genre is, of course,
Nietzsche, who thought that European civilization had taken a wrong
turning about the time of Socrates and that its sickly,
priest-dominated culture was in terminal decline. There is no
doctrine to be extracted from his largely aphoristic writings--merely
flashes of lightning in which points of view (or "perspectives")
light up a landscape without a determinate character of its own.
Nietzsche's professorial colleague at Basel, the historian Jacob
Burckhardt, was a more typical pessimist. Burckhardt is perhaps the
most powerful exponent of the view that democracy is allowing the
masses to vulgarize the inherited culture of Europe. Order and
tradition were under threat from the increasing power of the
bureaucracy. Finding in the Renaissance a haven of color and
creativity, he had to face, like others such as Montaigne before him,
the paradox of individuality: that its creativity can involve
breaking the rules.

In the racial doctrines of their contemporary Joseph-Arthur de
Gobineau, the logic of declinism reveals itself more clearly. It also
exhibits the slide from a sober concern with realities toward various
kinds of self-serving melodrama. Gobineau attributed the vitality of
all civilization to an original Aryan race now becoming mongrelized.
History "shows us that all civilizations derive from the white race,
that none can exist without its help. . . ." This included, according
to Gobineau, the Chinese, whose civilization actually derived from a
colony of Aryan warriors from India.

Even at this early point in Herman's account of decline, the reader
will recognizethat this is intellectual history in the genre of
comedy, though comedy with a bitter aftertaste. Gobineau's
contemporary, Cesare Lombroso, for example, pioneered the science of
degeneration, especially as exhibited in the biological features of
the modern criminal. Degeneration soon got mixed up with racial
doctrines, some of whose exponents identified Jews as racially
degenerate. Lombroso, himself Jewish, responded by declaring that
anti-Semitism was itself a symptom of degeneration.

The key concepts of declinism are vitality and mechanism. Decline
happens when creativity subsides into routine. It is thus a
department of the romantic movement. The typical declinist finds
vitality elsewhere, sometimes in other regimes, and thus overlaps
with Paul Hollander's political pilgrims who set out from Western
democracies and found in totalitarian societies the joy and
spontaneity lacking in our materialist world. Black theorists in the
United States, for example, turned Gobineau upside down to find the
fons et origo of Western civilization in pre-historic Africa. "This
race", wrote W.E.B. Du Bois about the negro, "has the greatest gifts
of God, laughter. It dances and sings; it is humble; it longs to
learn; it loves men; it loves women. It is frankly, baldly,
deliciously human in an artificial and hypocritical world."

Du Bois had picked up these notions of soul in, of all places,
Wilhelmine Germany, where it became the fashion to distinguish
between Kultur, the spring of vitality, and Zivilisation, the
mechanical cleverness that issued in capitalism and technology. The
Germans, of course, stood for culture against Anglo-Saxon commerce
and technological know-how.

In the twentieth century, cultural pessimism became the small change
of intellectuality. It found in all features of the modern Western
world evidence of decadence. Spengler's Decline of the West expressed
an almost universal mood. The Marxist Frankfurt School of critical
theory invented the image of modern life as consumerism,
commodification, mass-produced entertainment, and the complete
absence of genuine humanity. Driven out of Germany by the Nazis,
these critical theorists simply turned up the volume of hysteria and
attacked the America that had given them sanctuary as being so
utterly fascist in character as to have no need of an actual fascist
movement. After the Second World War they floated the concept of the
"authoritarian personality" as a device for smoking out concealed
fascism everywhere.

Horkheimer, Marcuse, Adorno, and the rest--powerful influences on the
counterculture of the 1960s--illustrate not only the dishonesty of
most declinist intellectuals but also the feature that makes them
supremely tiresome: there's no getting rid of them. Rejecting true
Marxist community in the Soviet Union, they moved back to capitalist
Frankfurt and continued to complain about its horrors. Similarly,
black believers in the historical destiny of Africa to redeem the
world, or those like Susan Sontag or Jane Fonda who discovered such
joy and spontaneity in the North Vietnam of the 1970s, seldom took
off to share the higher spontaneity. On the contrary, they could
seldom be dragged away from well paid positions, usually academic, in
the degenerate capitalist West whose materialism they so deplored.
Some of them--Sontag herself perhaps most notably--have changed their
minds, and others have lost stridency or fallen silent, but the
declinist experience does suggest that although there is a strong
connection between intellectuality and silliness, it does not go so
far as to affect serious practical decisions.

Declinism scorns the mechanical, yet is itself little more than the
shuffling and reshuffling of a well known pack of ideas, and any idea
can fit any purpose the writer likes. The chosen people can be
Aryans, Jews, Blacks, or indeed other abstract classes such as
workers or women. Degenerate art might be Picasso and Schoenberg, as
it was for Max Nordau in his book Degeneration, but it can just as
easily be Norman Rockwell and Mickey Mouse, as it was for the
Frankfurt School. Jazz, sex, drugs, and crime might signal the end
of civilization, or they can, as for Norman Mailer, be the way blacks
rebel and survive the deadening effects of white society. Some thinkers,
such as Foucault, included insanity as a form of rebellion that freed
the individual from repressive reason. This would not have appealed to
Lombroso, whose born criminal becomes for Genet and others the human
being in his fullness. The absorption of non-whites in American
society can be taken as repairing the damage thought to result from
centuries of exclusion, but for the multiculturalist it becomes
nothing less than cultural genocide. And each of these rhetorical
shifts is just as plausible as its opposite. The remarkable thing is
that this ghastly potpourri can be taken seriously in universities.

One consistent pattern in declinism is self-hatred--or at least
hatred of some collective self in which the declinist is involved.
Bourgeois like Sartre repudiated both individuality and the
rationality in which they had been educated. An even more striking
case is the historian Arnold Toynbee, whose version of apocalyptic
crisis was that we must "choose between political unification and
mass suicide." Like many of the others, he regarded as barbarous and
materialist the same America that welcomed him as a popular lecturer.
He believed on the one hand that the Jews had bequeathed fanaticism
and intolerance to the West, and on the other that their
cosmopolitanism anticipated the inevitable advent of world government. 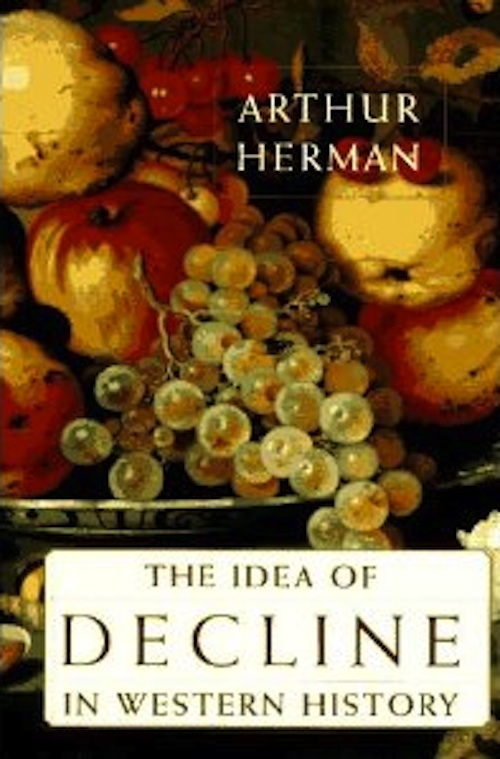