But McChrystal is critical of so-called enhanced interrogation techniques (waterboarding, sleep deprivation and so on) and the Bush administration’s initial insistence on separating the conflict in Iraq from the broader counterterrorism fight. That separation would soon disappear, and Iraq would become the centerpiece of the administration’s “war on terrorism.” He is equally critical of the chaos in the Baghdad Green Zone when he arrived in 2003 and the resentment of the CIA toward JSOC’s role in special operations, believed by the agency at that time to be its special domain. It is a measure of the military’s slowness to adapt to the new world of counterinsurgency that the CIA, meant to collect and analyze information, remade itself into a quasi-military special-operations organization.

McChrystal is fond of T. E. Lawrence, the famous Lawrence of Arabia, whose Seven Pillars of Wisdom he revisited “countless times,” as much as anything because he saw himself in Lawrence’s shoes as he tried to corral disputatious Iraqi forces, “more tribes than modern military units.” And he demonstrates a human sensitivity more common to our warriors than most civilians realize. Accompanying a Ranger company in bloody Ramadi, he observes a young Ranger pull up a chair for an elderly Iraqi to sit in as a dozen other Iraqis are ordered face down on the ground. Then a four-year-old Iraqi boy, confused, joined the men and placed his face on the ground. Recalling the episode later, McChrystal mused that as he watched what must have been the humiliation of the boy’s father, “I thought, not for the first time: It would be easy for us to lose.”

This thought raises a broader question rarely addressed by senior policy makers in Washington or senior officers in Iraq or Afghanistan: What does it mean “to win”? How do you define “victory” in venues where former European powers finally gave up and left? Is it the minimalist goal of refusing to be driven out by indigenous forces? Or is it the maximalist goal of establishing stable and enduring democratic governments and societies? Though he does not address these questions directly or at length, McChrystal comes much closer than most when he shifts his flag back to Afghanistan as commander of ISAF. As he landed in Kabul in June 2009 to assume command, he Velcroed on his four-star insignia.

Virtually all U.S. and allied operations produced at least a “steady trickle of dead Afghans,” which generated little attention and were an “afterthought.” Outraged at this casualness and its disconnection from the purpose of our presence, he writes:

I’d watched as a focus on the enemy in Afghanistan had made little dent in the insurgency’s strength over the past eight years and, conversely, had served to antagonize Afghans. Not only was Afghans’ allegiance critical, but I did not think we would defeat the Taliban solely by depleting their ranks. We would win by making them irrelevant by limiting their ability to influence the lives of Afghans, positively or negatively. We needed to choke off their access . . . to the population.

A more thoughtful definition of winning or victory is difficult to find.

As he traveled Afghanistan, as he had done as JSOC commander in Iraq, McChrystal refused to wear body armor, carry a weapon or wear sunglasses. He understood symbols and also the negative impact these symbols represented to citizens in both countries. From his account, the higher in rank and more responsible he became, the more sensitive he became to the noncombat side of our military presence and the greater the burden he felt to dispel images of occupier or conqueror. After a lengthy period of touring, watching and listening, he concluded that his job and that of ISAF were “as much about building Afghan confidence as killing Taliban insurgents.”

With more rank and responsibility, he also became more aware of the political, social and cultural dimensions of his mission and presence. It is interesting to watch his subconscious, or at least unarticulated, transition over many years and deployments from first-class warrior to seasoned commander and then sophisticated uniformed diplomat. It is a transition few senior-grade officers make with much success and marks the mind of a man willing to watch, learn and expand in scope and outlook.

McChrystal was able to make the transition, with notable difficulties, as much as anything because he was fully aware of its necessity. The warrior’s code is based on separation of civilian and military command and the subordination of the latter to the former. It is possible to rise to two- or even three-star rank and avoid much of the messy world of politics, including political journalism. But, as many have proved, it is virtually impossible to do so with the fourth star on your shoulder. As McChrystal’s experience proves, a senior commander at his level deals at least as much with political realities, both in the nation he serves and the nations in which he serves, as he does with military realities. If nothing else, congressional committees often summon service chiefs and combat commanders to testify, and they are challenged to state where their judgments may differ from their civilian superiors, including the commander in chief.

“The process of formulating, negotiating, articulating, and then prosecuting even a largely military campaign involved politics at multiple levels that were impossible to ignore,” he concludes. He later continues: “As a professional soldier I was committed to implementing to the best of my ability any policy selected by civilian leadership.” One seriously doubts whether, on reflection, he might stand by such a doctrine were an unhinged set of civilian leaders to emerge with designs beyond the military means available to achieve them.

And this too often is the rub: civilian commanders, up to and including the commander in chief, expect field commanders to meet military and political goals with fewer resources than their professional judgment tells them are required. After making their case and being denied, usually on political grounds, for more troops and support, the commanders in the field are expected to salute and say, “Yes, sir.” The history of American warfare is replete with instances of mismatches between political expectations and military resources available. And a commander is torn between the political duty of obeying his often-misguided civilian superiors and his moral duty to protect his troops. By late 2009, toward the end of the Obama administration’s first full year in office, the struggle over the definition of victory in Afghanistan reemerged in the context of the debate over another surge of troops and the dimensions of such a surge. The discussions that took place via teleconferences between the White House and the senior military and diplomatic figures in the embassy compound in Kabul focused on linguistics. Was it our goal to “defeat” or “degrade” the Taliban? McChrystal defined the mission as: “Defeat the Taliban: Secure the Population.” Under questioning from an unidentified White House participant (it may have been Vice President Biden) as to why the Taliban had to be crushed or destroyed, McChrystal responded that defeat in military doctrine, since Sun Tzu, was rendering the enemy incapable of achieving its goals. “I never thought we’d crush the Taliban in a conventional military sense,” he writes. “I hoped to defeat it by making it irrelevant.”

MCCHRYSTAL’S BOOK contains many unaddressed undercurrents that require further thought, if for no other reason than that future Iraqs and Afghanistans are just an insurgency or terrorist attack away. It should be instilled in four-star generals that retirement comes with a requirement to write lessons learned: What did we do right that deserves to enter our doctrine under similar conditions? What did we do wrong that should never be repeated? And why did we do it?

My Share of the Task will attract attention for lessons it may hold concerning that elusive standard called leadership. It is not a primer on this topic. McChrystal does not provide sustained reflections on the nature of leadership or its qualities. He does offer anecdotal accounts of ways in which he sought to lead his troops and his subordinate officers. And those are valuable anecdotes for this purpose. But he might have expanded, and still might, on leadership’s more profound aspects: ability to see over the horizon (the “vision thing”), ability to devise new policies, programs and methods to deal with anticipated changes, and finally the ability to persuade others that the old ways must give way to the new.

McChrystal’s military career traces the arc of transition from set-piece major battles that have characterized nation-state wars for three and a half centuries to the advent of a new kind of conflict, whose roots are centuries old but whose recent resurrection is characterized by low-intensity, largely urban, nonuniformed insurgencies whose adherents notoriously violate established rules of war. His career marks an extremely important era of transitional leadership. Already, national-security experts have judged his tenure in Afghanistan as “not a success.” But we still have not decided what “success” in that theater might realistically look like. 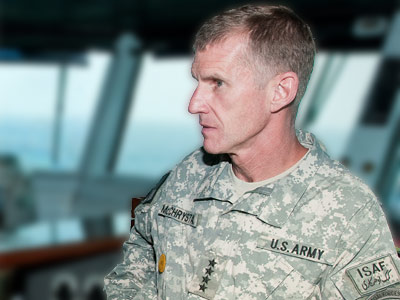