RUSSIAN PRESIDENT Vladimir Putin has a problem. The land power he leads lies vulnerable to invasion. The unremitting grassy steppes of his nation, extending from Europe all the way to the Far East, with hardly a mountain range or seashore or major forest to hinder encroachment by army or horde, has fostered a national obsession with the need to control territory as a hedge against incursion. Putin shares this obsession, as indeed he must as leader of this inherently exposed country.

This fixation is hardly new. It was shared by the very first Russians, the Kievan Rus, beginning in the ninth century—until they were overrun in the mid-thirteenth century by Mongol hordes under Batu Khan, Genghis’s grandson. It was shared by medieval Muscovy, domain of that pitiless imperialist Ivan the Terrible and his successor, Boris Godunov—until it too succumbed to invading Swedes, Poles, Lithuanians and Cossacks in the early seventeenth century. It was shared by the Romanov dynasty during its three-hundred-year reign marked by one of the greatest land conquests in world history—until it also crumbled amid an awesome territorial contraction after World War I. It was even shared by the succeeding Bolsheviks, who turned out to be the greatest imperialists of all—until they saw their empire disintegrate and Russia shrink to its smallest dimension since before the emergence of Catherine the Great in the mid-eighteenth century.

It is little wonder that Putin should obsess over his nation’s territorial dominion. Yet many in the West argue he should resist such flights of national nostalgia, accept without protest the West’s eastward expansion and concentrate on improving his governmental structures so they could become more like those of the West.

You don’t get such sentiments from Robert D. Kaplan, the world-traveling reporter and intellectual whose fourteen books constitute a bedrock of penetrating exposition and analysis on the post–Cold War world. In this latest volume he strips away much of the cant that suffuses public discourse these days on global developments and gets to a fundamental reality: that geography remains today, as it has been throughout history, one of the most powerful drivers of world events.

“Geography,” writes Kaplan, chief geopolitical analyst for Stratfor, “is the backdrop to human history itself. . . . A state’s position on the map is the first thing that defines it, more than its governing philosophy even.” Indeed, Kaplan suggests that a state’s geographic position often influences its governing philosophy. He quotes historian G. Patrick March as saying Russia’s territorial vulnerability has spawned in that country a “greater tolerance for tyranny.” Britain, on the other hand, writes Kaplan, “secure in its borders, with an oceanic orientation, could develop a democratic system ahead of its neighbors.”

Kaplan has no illusions about the controversy his unsentimental realism will generate. “Maps,” he writes, “are a rebuke to the very notions of the equality and unity of humankind, since they remind us of all the different environments of the earth that make men profoundly unequal and disunited in so many ways, leading to conflict, on which realism almost exclusively dwells.”

Indeed, even before publication, his book stirred an angry response in Publishers Weekly, whose thumbnail reviews sometimes seem as if they are crafted to enforce humanist thinking. The anonymous reviewer called Kaplan’s book an “overwrought map exercise” consisting mainly of “diverting but feckless snippets of history, cultural lore, and economics” as well as “a jumble of empty rotational metaphors.” Kaplan’s “pitiless ‘realism,’” writes the reviewer, amounts to “an unconvincing reprise of an obsolete worldview.”

Kaplan himself, with far more balance and perspective than his agitated critic, identifies the wellspring of such vituperation. The end of the Cold War, he writes, blinded Western thinkers to many harsh realities of the world. He elaborates:

For suddenly we were in a world in which the dismantling of a man-made boundary in Germany had led to the assumption that all human divisions were surmountable; that democracy would conquer Africa and the Middle East as easily as it had Eastern Europe; that globalization—soon to become a buzzword—was nothing less than a moral direction of history and a system of international security, rather than what it actually was, merely an economic and cultural stage of development.

Thus, the very term “realism” became a pejorative as American universalism embraced the U.S. military as “the hidden hand that allowed universalist ideas to matter so much more than terrain and the historical experience of people living on it.” The great historical lesson became “Munich”—the imperative that evil around the world must be nipped in the bud before it sprang up, Hitler-like, to threaten global stability and wreak havoc on innocents. This sensibility led first to America’s involvement in the Balkans in the 1990s, then to its invasions of Iraq and Afghanistan.

But U.S. difficulties in Iraq and Afghanistan, writes Kaplan, spawned an intellectual counterforce, reflected in the reemergence of the “Vietnam” analogy—the idea that ethnic and sectarian hatreds around the world, far from mere obstacles in the nation’s missionary calling, are warnings that American adventures abroad can be a loser’s game. Iraq, in Kaplan’s view, “undermined a key element in the mind-set of some: that the projection of American power always had a moral result.”

And so we have a powerful debate between the devotees of Munich and those of Vietnam. Kaplan presents his book as an effort to find a balance between the two. He writes, “Vietnam is about limits; Munich about overcoming them.” Each analogy, he adds, can be dangerous on its own:

It is only when both are given equal measure that the right policy has the best chance to emerge. For wise policymakers, while aware of their nation’s limitations, know that the art of statesmanship is about working as close to the edge as possible, without stepping over the brink.

For Kaplan, geography offers guidance for understanding the swirl of pressures, forces, passions and interests that direct the course of human events—and thus for understanding also the proximate location of that brink. To plumb those lessons, he offers an intellectual travelogue through the works of the great geopolitical thinkers of the last century, when such analysis was considered a worthy element of discourse, not to be dismissed reactively with the intolerance of today’s Publishers Weekly.

Thus does Kaplan quote Nicholas J. Spykman, the great Dutch American strategist of the early World War II era, as noting that much changed for the United States between George Washington and Franklin Roosevelt, “but the Atlantic continues to separate Europe from the United States and the ports of the St. Lawrence River are still blocked by winter ice.” Alexander I and Joseph Stalin ruled Russia in far different eras, but both shared an “endless struggle for access to the sea.” France’s Georges Clemenceau and Andre Maginot, some two thousand years after Caesar’s Gallic adventures, shared his “anxiety over the open German frontier.”

Kaplan adds that it wasn’t merely two oceans that gave America the luxury of its idealism; “it was also that these two oceans gave America direct access to the two principal arteries of politics and commerce in the world: Europe across the Atlantic and East Asia across the Pacific.” That goes a long way toward explaining America’s rise upon the global scene. And it’s not only Russia that sees danger in open, unprotected land borders, for Germany “faces both east and west with no mountain ranges to protect it, providing it with pathologies from militarism to nascent pacifism, so as to cope with its dangerous location.” Though Britain’s island identity gave it a certain protection from invasion, its location so near the Continent posed sufficient danger that it developed “a particular strategic concern over the span of the centuries with the politics of France and the Low Countries on the opposite shore of the English Channel and the North Sea.”

Such examples abound in the book. Kaplan quotes British writer Freya Stark as noting that Egypt from its first stirrings lay “parallel and peaceful to the routes of human traffic,” and was thus well positioned to develop a high degree of civilization. Mesopotamia, by contrast, was always “right-angled and obnoxious to the predestined paths of man.” Unprotected by any natural barriers, it found itself forever subject to the woes of plunder. Indeed, Kaplan even speculates that Mesopotamia’s modern tendency toward tyranny could be “geographically determined.” Every Iraqi dictator going back to the 1950s, he writes, “had to be more repressive than the previous one in order to hold together a state with no natural borders composed of Kurds and Sunni and Shiite Arabs, seething with a well-articulated degree of ethnic and sectarian consciousness.”

KAPLAN CONCEDES that his emphasis on geography could pull him into the kind of determinist thinking that Isaiah Berlin rejected in his famous 1954 essay, “Historical Inevitability.” Kaplan opts for what French philosopher Raymond Aron called a “sober ethic rooted in the truth of ‘probabilistic determinism.’” Says Kaplan: “The key word is ‘probabilistic,’ that is, in now concentrating on geography we adhere to a partial or hesitant determinism which recognizes obvious differences between groups and terrain, but does not oversimplify, and leaves many possibilities open.” He cites the wisdom of America’s liberal interventionists who intuited geographic reality in supporting U.S. involvement in the Balkans but opposing it in Iraq: 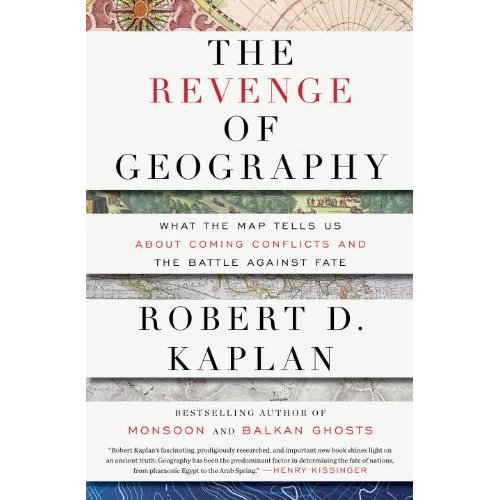