SINCE THE 1990s, U.S. policy toward China has been premised on the idea that increasing Chinese wealth and international stature would lead naturally to domestic political liberalization. Early in the previous decade, the Bush administration also held out hope that China would become a “responsible stakeholder” in the international community. The intervening years have witnessed marked growth in China’s economic and diplomatic heft, with the country emerging as the second-biggest economy in the world. Its leaders refer to it as a “great power” alongside the United States. And yet the Chinese Communist Party (CCP) retains its monopoly on political authority, and since the run-up to the 2008 Beijing Olympics the party-state has clamped down on domestic human-rights activists, lawyers and other advocates of liberal reform. Abroad, China has engaged in increasingly militarized efforts to press its claims to disputed territory, and it has also used economic tools, including threats to slow or halt commerce in certain goods, to this end. Where Chinese political elites once at least paid lip service to democratic values and international norms, now they actively tout their model as an alternative to the so-called Western system. How did successive generations of U.S. policy makers get China so wrong?

One answer is that they ignored indicators from modern Chinese history and the CCP’s record that would have called into question the notion of inevitable Chinese liberalization and assimilation to international institutions. Better late than never, Orville Schell and John Delury probe those indicators in their excellent and erudite new book, Wealth and Power: China’s Long March to the Twenty-First Century. Schell, a former dean of the University of California, Berkeley’s Graduate School of Journalism and current director of the Asia Society’s Center on U.S.-China Relations, and Delury, a Yale-trained historian based at Yonsei University in Seoul, combine scholarly learning with a reportorial appreciation of colorful, revealing details. They breathe life into their history through biographical sketches of pillars of Chinese intelligentsia and politics from the nineteenth century through the twentieth, and they argue that national rejuvenation—defined in terms of fuqiang (“wealth and power”)—has been the goal of these figures all along. Chinese elites over the past two centuries have attempted to convert the shame of their country’s nineteenth-century humiliation, when outside powers repeatedly exploited China’s military inferiority, into energy to fuel China’s ascent and redress its anguished past. If some of these elites from time to time promoted Western political values, they did so only fleetingly, at moments when they believed liberal democracy could enrich and strengthen the state. Schell and Delury’s introduction identifies a common theme across these cases:

Unlike democratic political reform in the West, which developed out of a belief in certain universal values and human rights as derived from a “natural,” if not God-given, source, and so were to be espoused regardless of their efficiency, the dominant tradition of reform in China evolved from a far more utilitarian source. Its primary focus was to return China to a position of strength, and any way that might help achieve this goal was thus worth considering. . . . Reformers have been interested in democratic governance at various stages in China’s tortuous path, not so much because it might enshrine sacred, inalienable political liberties but because it might make their nation more dynamic and thus stronger.

Among Chinese elites, concerns about power, understood as a function of economic and military capacity, have trumped any serious appreciation of human rights or the rule of law, whether at home or abroad. They see the world through power-hungry lenses. It is a dog-eat-dog competition out there, and the unit of account is the state, not the individual or citizen. While this perspective contrasts sharply with contemporary Western norms, it would have been familiar to nineteenth-century European statesmen such as Otto von Bismarck. Such an outlook precludes support for genuine political liberalization, which would entail popular sovereignty. Instead, China’s leading thinkers and statesmen have tended to see themselves as essential to their country’s effort to prevail in the global rat race—and, accordingly, as entitled to amass their own personal wealth and power. SCHELL AND DELURY thus explain why China has not democratized, and this is a significant accomplishment. But they also illuminate the domestic underpinnings of China’s foreign and security policy. While the authors focus almost exclusively on Chinese internal developments, their analysis provides critical context for understanding contemporary Chinese strategy and its roots in the work and thought of key Chinese figures over the century and a half since the Opium Wars. For example, the authors profile the nineteenth-century reformer whose blueprint for both naval modernization and a “charm offensive” vis-à-vis Southeast Asia and Russia seems to guide Beijing today. And from the book’s treatment of Deng Xiaoping’s economic guru, Zhu Rongji, the careful reader may detect how and why Zhu let Western interlocutors deceive themselves into thinking he was a true free marketeer, when in fact he had no intention of abandoning state-sponsored capitalism. Since the emergence of the modern state at the end of the last dynasty, China’s leading thinkers and statesmen have set their sights on reestablishing the Middle Kingdom as the preeminent power in its orbit, and they have seen this goal as a zero-sum endeavor, requiring them to steal, plot and use force against rivals or even potential rivals and their allies.

The book chronicles the pioneers of China’s rise from its low point in the late Qing period, when Western states and Japan inflicted defeat after defeat on the demoralized, disintegrating dynasty. As reflected in the officially sanctioned history curriculum for all Chinese students today, the catalogue of horrors includes the Opium Wars of 1839–1842 and 1856–1860, the first Sino-Japanese War of 1894–1895, the Boxer Rebellion in 1900 and the Paris Peace Conference after World War I in 1919, which transferred to Japan Germany’s colonial leases over Chinese ports on the Liaodong and Shandong peninsulas. (China’s curriculum downplays the Taiping Rebellion, a civil war that ravaged the country from 1850 to 1864, but this purely domestic conflict was another major blow to the Qing.) Among the figures profiled in the book’s coverage of this period are the nineteenth-century reformist intellectuals Wei Yuan (1794–1857) and Feng Guifen (1809–1874); the last effective Qing dynasty ruler, Empress Dowager Cixi (1835–1908); a turn-of-the-century thinker and coiner of the phrase “sick man of Asia” for his homeland named Liang Qichao (1873–1929); the founder of China’s Nationalist Party, Sun Yat-sen (1866–1925); the father of the May Fourth movement in 1919, Chen Duxiu (1879–1942); and Sun’s Nationalist successor Chiang Kai-shek (1887–1975), who lost the Chinese Civil War and ended up on Taiwan. While the last Qing ruler abdicated in 1911, China remained divided and weak through the period of Japanese incursions and the civil war following the end of World War II.

The book then turns to CCP chiefs Mao Zedong (1893–1976) and Deng Xiaoping (1904–1997), as well as Zhu Rongji, who arguably engineered China’s economic growth in the 1990s. The final profile focuses on Liu Xiaobo, the 2010 Nobel Peace Prize laureate who has been in prison since 2008. Liu differs from the preceding characters in that he is a genuine democrat. “Despite the episodic emergence of brilliant and courageous liberal dissenters, their demands for democracy have not ended up being the main motive force of modern Chinese history, at least so far,” write Schell and Delury, adding that the stronger driver seems to have been the urge to restore China’s past wealth and power. They end their book, however, on a note of characteristic Western optimism:

But as these goals now become realized, will not more and more Chinese demand to enjoy their newfound affluence in a more open and law-abiding society where they have a greater role in deciding who leads them and how they are governed? Is it not also probable that the yearning of Chinese leaders for international respect will end up being just as strong a magnet drawing them, too, toward a more consultative, even democratic, form of governance?

Despite such questions, Schell and Delury will leave careful readers wary. Their account of China’s internal evolution explains why its persistent authoritarianism is no accident but rather reflective of deeply held beliefs within the elite that stretch back at least a century and a half. The work also reveals that these beliefs are likely to preclude China from becoming what Westerners call a responsible stakeholder. With the exception of Liu Xiaobo, the book’s central figures have tended to view wealth and power as inextricably linked—and as the lodestars of international relations. In their minds, success in interstate commerce naturally produces geopolitical dominance, furnishing the resources for a robust military and facilitating global influence. Further, they have believed that in order to reassert Chinese primacy in a world dominated by wealth and power relations, China must strengthen itself—or “self-strengthen” (ziqiang)—in all possible ways and embrace realpolitik, which means, in part, learning from enemies and appropriating their winning ways. Chinese leaders have understood for decades that, during this period of learning and building up forces, China must defer to stronger powers. But, in accordance with the logic of realpolitik, Beijing also would try to divide hostile coalitions and exploit weaker powers. Finally, Chinese reformers in the late nineteenth century revived two classical Confucian principles related to harmony and shame that live on today, serving as a reminder of the fundamentally illiberal, antidemocratic premises of Chinese politics. Schell and Delury thus clarify that CCP leaders are steering the country down a path outlined more than a century and a half ago, when China was still an empire and international relations could realistically be characterized as the clash of colonial titans. China hatched its current approach to domestic politics as well as to foreign relations in this nineteenth-century context.

Pullquote: If China continues on its present trajectory of economic and military expansion, it will become a bolder actor in the world, not a more democratic or responsible one.Image: 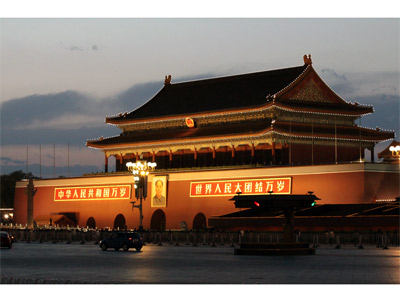