Voice of the New Global Elite

TWENTY-FIVE YEARS ago, if you had asked a typical senior American corporate type or public official what his or her weekly reading consisted of, the answer would usually have run something like this: “Time, Newsweek and maybe U.S. News & World Report . . . oh, yes, and the Economist.” Today, instead of being an afterthought, the Economist probably would head the list. It might even be the only publication mentioned. U.S. News & World Report ceased being a full-scale newsmagazine years ago. Newsweek, since 2010 the feeble foster child of Tina Brown’s flamboyant Daily Beast website, has lost much of its influence and most of its original staffers and subscribers. Even mighty Time, once the educated American middle class’s undisputed arbiter of all things political, economic, social and cultural, has suffered massive staff and circulation hemorrhaging and is in the throes of a seemingly endless search for a new identity. Time knows it isn’t what it used to be but still can’t make up its mind what it should become.

All of this would seem to be conclusive evidence that the era of the weekly newsmagazine is over, rendered obsolete by burgeoning electronic media and 24/7 cable-news coverage and commentary. But if the once-great redwoods of American weekly journalism are all dead, dying or seriously ill, a smaller, older English oak survives and flourishes, possibly because it has never tried to be anything other than itself: a literate, informed (and occasionally smug) publication aimed at a literate, informed (and occasionally smug) readership. First published in 1843, which makes it eighty years older than Time and ninety years older than Newsweek, the Economist remains true to the statement of purpose printed in its first issue, still proudly run each week at the foot of its contents page: a pledge of commitment to the “severe contest between intelligence, which presses forward, and an unworthy, timid ignorance obstructing our progress.”

The age of Victorian optimism is long gone, and the sun has forever set on the British Empire. But the Economist goes on, the exemplar of that old Victorian determination to get things done and do them right. Today, it is arguably more influential, more widely read and more prestigious than at any other time in its 169-year history and in a way that is unlike any other magazine. Why is this so? And how well does the quality of its content live up to the Economist’s lofty status?

Answering the first question is easier than answering the second. More than any other serious news journal since the invention of the Gutenberg press in the fifteenth century, the Economist is the beneficiary of a unique, global linguistic confluence: the universal dominance of the English language. This triumph was made possible by an event unprecedented in world history: one language being shared by two successive global superpowers that, between them, have led the shaping of the modern world from the dawn of parliamentary politics and the Industrial Revolution all the way to the present day. Power has shifted from one country to the other, and may do so again, but the English language remains paramount. Starting in Great Britain, it began a triumphant march that would see it become the mother tongue of countries such as the United States, Canada, Australia and New Zealand, all originally colonized and populated by people of Anglo-Saxon heritage. But it didn’t end there. English also is the language of the educated elite in Asian, African, Pacific and West Indian countries once part of the vast British Empire. To cite one small piece of evidence, many of today’s best-written (and best-selling) English-language novels are written by English-speaking Indians, Pakistanis, Caribbeans and Africans, all linguistic beneficiaries of a now-defunct British Empire and a still-expanding global market for English-language fiction.

Meanwhile, even as England—first overextended and then exhausted by two world wars—ceased to be a superpower, a new English-speaking colossus, the United States, filled the void, not just because of its military and economic might but also because of its scientific and technological supremacy. Around the world, English (now with an American inflection) expanded ever further as the international language of science, commerce, academia, sea and air transport, diplomacy and, thanks to globalized media, even popular culture. At the same time, millions of foreign students, especially promising or privileged ones, have completed their educations at prestigious American and English universities after having learned English at home as a second language.

One result is a growing worldwide elite audience of English speakers and readers—about 1.5 million subscribers—for whom the Economist is the perfect fit, comprehensively covering as it does both the United States and the United Kingdom and offering more thorough coverage of the rest of the world than any rival English-language periodical. The Economist has become the premiere worldwide newsweekly for the new global elite.

NOT EVERYONE is happy about this, especially those who view the world from a more leftward angle. Thus the Observer, a soft-Left—and possibly envious—English weekly newspaper with little influence or impact outside the British Isles, grumbles that the Economist’s writers “rarely see a political or economic problem that cannot be solved by the trusted three-card trick of privatisation, deregulation and liberalisation.” There is some truth to this. At heart, the Economist remains what it began as, an advocate of the classic nineteenth-century English strain of liberalism that favored social reform, open markets and a representative form of government with a franchise that expanded in tandem with better, increasingly accessible education and resultant economic progress. There is nothing new here, but these qualities remain the key to progress in functioning democracies—and will have to evolve in lawless, corrupt police states in much of the Third World and many parts of the former Soviet Union if they are to become stable, free societies.

The problem in countries such as Russia is not that ailing state industries and underdeveloped state natural resources were truly, lawfully privatized. It is that they were grabbed up by Kremlin insiders, transforming a handful of crooks, fixers and members of the old nomenklatura into a corrupt and entrenched new oligarchy while leaving most ordinary Russians out in the cold. The same applies to “free elections” held before the emergence of a literate, informed electorate and freely competitive political institutions in backward countries without strong rule-of-law traditions. When the results turn ugly, the reason is not a failure of liberalization but the use of superficially “liberal” labels as cover for replacing an old set of oppressors with a new one through violence, intimidation, corruption, and the lack of a “liberal” foundation of individual rights and protections.

In such cases, while the economic and political remedies advocated by the Economist may seem passé to trendy left-wingers in the West, they remain the best—and possibly the only—cure for what ails most of the nations and people of the Third World and much of the former Soviet Union (not to mention overextended, overregulated European welfare states tottering on the brink of bankruptcy).

Thus, by consistently championing basic values such as reform, social improvement, free trade and individual rights, the Economist stands for values that are timeless, proven and certainly not outdated. Indeed, on many of today’s hot-button issues, the Economist’s brand of what might be called liberal libertarianism is—depending on your perspective—“politically correct” in the best or worst sense of the term. For example, it has emerged as a leading voice—critics might call it an alarmist one—in the global-warming debate. It also strongly advocates national gun control in the United States, favors abolition of capital punishment and has “come out” in favor of gay marriage.

While he must have found the Economist’s endorsement of gay marriage gratifying, Andrew Sullivan, a longtime gay-rights activist and former editor of the New Republic, had another ax to grind. Sullivan, who happens to be of working-class British origins, was more driven by class than gender considerations when, in the pages of the New Republic, he denounced the Economist staff for being dominated by graduates of Oxford University’s elite Magdalen College.

Sullivan’s class animosity already may have been out of date when he wrote about it. To cite one human statistic, at that time the late Peter David, a graduate of the University of London rather than even one of Oxford’s less prestigious colleges, already had been a member of the Economist’s staff for fifteen years and eventually would earn distinction for his nuanced analysis of Middle East complexities. He once wrote that “it is necessary to remember that what people call ‘the Arab world’ is a big and amorphous thing, and arguably not one thing at all,” a central fact that seems to have eluded ideologically driven Arabists and Israeli partisans alike. More recently, as the magazine’s Washington bureau chief and author of the “Lexington” column on American life and politics, David was just hitting his stride before his premature death in a motoring accident in Virginia this May. The son of Lithuanian Jews who emigrated to England from South Africa, Peter David represented the kind of educated, informed intelligence that characterizes the Economist at its best and has nothing whatsoever to do with one’s ethnicity or old school tie.

Pullquote: One of the signature virtues of the Economist is its ability to spot and put into perspective quiet but important developments ignored by most of the mass media.Image: 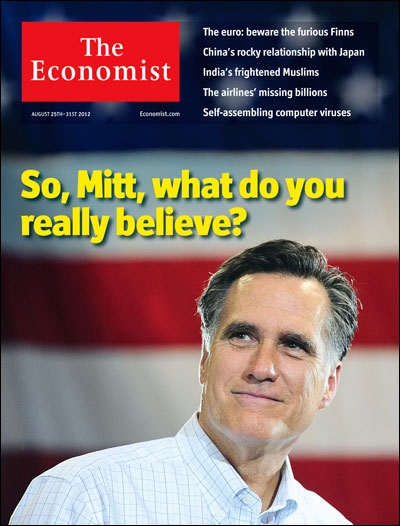