Whose World Is It Anyway?

[amazon 0199739390 full]IN 1990, G. John Ikenberry and Charles Kupchan published a research article on hegemonic power in International Organization that originally garnered little notice but proved to be much beloved by scholars. In “Socialization and Hegemonic Power,” Ikenberry and Kupchan argued that hegemons maintained their status through more than brute force or the manipulation of carrots and sticks. Wise hegemons took care to ensure that they educated the elites of subordinate states in their substantive beliefs. In doing so, these elites would learn to accept the ideas that animate the hegemonic power. Their takeaway point was that, while material power mattered, deep levels of socialization permitted a superpower to rule through noncoercive means.

Since publishing that essay, Ikenberry, now at Princeton, and Kupchan, a Georgetown professor and fellow at the Council on Foreign Relations, have gone in divergent directions. The former has continued to write about American hegemony and the order that emanated from it. In After Victory, he pointed out the ways in which the United States used multilateral institutions to “bind” itself to a liberal global order. More recently, in Liberal Leviathan, Ikenberry argued that these institutions are sufficiently appealing to rising states like China and India that their elites would help support America’s animating ideas.

Kupchan has pursued a more idiosyncratic track. A decade ago, in The End of the American Era, he argued that American unipolarity was doomed and the European Union would emerge as a new global superpower. Clearly, that prediction has not panned out, so now he is back with a new and more pessimistic prediction. In No One’s World, Kupchan joins the chorus arguing that the distribution of power has shifted away from the West and toward the “rest,” meaning non-Western nations. More significantly, Kupchan argues that these rising powers will not embrace the same ideas that governed the United States and Europe during the creation of the post–World War II and post–Cold War worlds: “The Chinese ship of state will not dock in the Western harbor, obediently taking the berth assigned it.” The conditions that caused the West to embrace secular, liberal, free-market democracy are not present in very large swathes of the globe. Instead, according to Kupchan, it will be no one’s world: a mélange of competing ideas and competing structures will overlap and coexist. No one great power or great idea will rule them all.

No One’s World is an interesting and wide-ranging book. In a brisk two hundred pages, Kupchan covers an astonishing range of material, from the finer points of sixteenth-century religious doctrine to the political economy of modern African patrimonialism. He provides a useful corrective to the Pollyannaish notion that countries, as they get richer, will look more and more like the West. Unfortunately, Kupchan’s analysis is a snapshot where moving pictures are needed. The analysis in No One’s World has a static quality to it. A more dynamic assessment yields a vision that suggests Ikenberry might have time on his side. Perhaps the rest of the world has been more socialized into vital aspects of Western norms than Kupchan thinks.

KUPCHAN BEGINS No One’s World with a look into the past, recounting exactly how the West became the West. In 1500, it was far from obvious that Europeans were about to start writing the rules for the rest of the globe. The Ottoman Empire was surging into the Balkans and threatening to conquer the Austrian Empire. Chinese admiral Zheng He was voyaging far into Africa’s east coast; the Ming Dynasty seemed poised to expand its influence far beyond the Pacific Rim. The Aztecs were the hegemonic actor in Central America, as were the Incas in South America. Compared to these empires, the set of squabbling, decentralized and warring states in northwest Europe did not seem a likely candidate for global hegemony.

How did it happen? Kupchan isolates the preconditions in an abbreviated but informative history of modern Europe, and his story closely follows the traditional narrative of Western economic history. The Protestant Reformation broke the Catholic Church’s monopoly on political and ecclesiastical power, fostering toleration for entrepreneurial activities. Urbanization increased the power of merchants and traders at the expense of landowners and traditional nobility. Europe’s natural geography prevented any single ruler from eliminating other nation-states, creating a political competition that made it costly to retard or suppress innovation. Combined, these effects empowered key commercial interests possessing strong “horizontal linkages” with each other (a phrase Kupchan uses often). These newfound sources of economic influence forced political leaders to accommodate rather than repress commercial interests within their borders: “A growing bourgeoisie had established itself as an indelible feature of Europe’s political landscape, leaving monarchs and nobility no choice but to grant this new class a say in matters of governance.” The long-run effects of politically empowering this new class were a boost in economic dynamism and political liberalization in Europe. As Europe dictated terms to the rest of the world, these ideas and values spread to settler colonies and the rest of the globe.

At this juncture, Kupchan pivots to the rest of the world to see if it is likely to follow the Western path. He is doubtful. Looking at the developing world’s past, he concludes that the preconditions for liberal, secular democracy are not present there. The Ottoman Empire as well as myriad imperial dynasties in Persia, China, India and Japan all failed to evolve in the same way as Western Europe. Because “Islam is a religion of faith and law in which there is no distinction between the sacred and the secular,” political leaders were also religious leaders in the Muslim world, making it difficult for the commercial class to develop any kind of autonomy. In South and East Asia, the suffocating hand of the central government prevented the kind of horizontal linkages that might have enabled private citizens to amass political or economic power.

For Kupchan, the past is the future in the non-Western world. After arguing that these regions will acquire greater influence over time, he concludes that modernization will not lead to Westernization. “The problem is that the defining attributes of the West—liberal democracy, industrial capitalism, and secular nationalism—are not being replicated as developing regions modernize.” To be sure, Kupchan acknowledges that the “rest” has embraced capitalism, but in many instances it is a capitalism of a peculiar form: government owned, operated and incubated via sovereign wealth funds, state-owned enterprises, national oil companies and state-development banks. More importantly, this structure of capitalism has made it easier for these states to prevent the other two legs of the Western model from developing. Instead of liberal democracy, other polities are emerging as viable alternatives, including “paternal autocracy” (Russia), “tribal autocracy” (the Persian Gulf), “communal autocracy” (China), “theocracy” (Iran), and various forms of democratic facades in Africa and Latin America. In many of these governments, the fusion of religious and political authority is strong enough to preclude any openness to secularism or respect for minority sects.

At the same time that these new forms of hard and soft authoritarianism have emerged, Kupchan argues that the West itself has been sabotaged from within. The sovereign-debt debacle has revealed “the crisis of governability” in the European Union. As Kupchan shrewdly observes, “The problem is that Europe’s institutions and its politics are on divergent paths; its institutions are getting more European and its politics more national.” The situation is little better in Japan, as that country grapples with a two-decades-long financial crisis, a looming demographic crunch and the clean-up costs of Fukushima. Only in comparison to its allies does the United States look good. The 2011 debt-ceiling crisis and the downgrade by Standard & Poor’s are symbols of the dysfunctional nature of American governance. As Congress has become more polarized, the checks and balances of the Constitution have become choke points where reform goes to die. The result is a world in which no single state is powerful enough to erect global norms, and no coalition of states can reach a sufficient degree of consensus on the rules of the game.

Unless and until the Western political machine can revive itself, No One’s World concludes, the United States will need to pursue a policy of offshore balancing. More generally, Kupchan warns that “if a new rules-based order is to emerge, the West will have to embrace political diversity rather than insist that liberal democracy is the only legitimate form of government.” Instead, a standard of “responsible governance” would widen the number of possible stakeholders at the global level. Furthermore, Kupchan advocates a devolution to regional forms of governance in which Western institutions serve as a template rather than a substitute for local solutions. He concludes by observing that this strategy should appeal to Americans given the current domestic situation: “What the United States needs to do to restore solvency and domestic consensus—retrench—is also what it needs to do to make more room for rising powers.”

Pullquote: According to Kupchan, it will be no one’s world: a mélange of competing ideas and competing structures will overlap and coexist. No one great power or great idea will rule them all.Image: 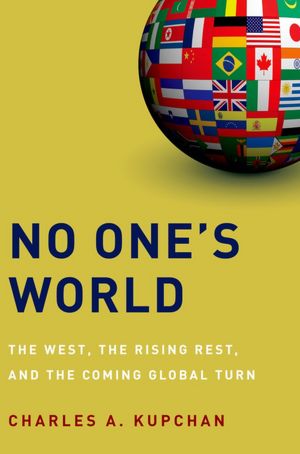