BERG REFRAINS from illuminating such internal inconsistencies and consequences of progressive policy. This unwillingness doubtless derives in part from the perils of the biographical genre. A biographer must choose between telling the story from his subject’s point of view and telling it from his own. Often, opting for the former conveys more information. Perhaps Berg concluded that suspending disbelief and trailing Wilson faithfully on his via dolorosa would give Americans the man he had promised. As Berg has doubtless observed, the results of hostile or even purely analytic biographies are often mediocre: Robert Caro’s portrait of Robert Moses of New York represents the rare exception. And an intensely hostile biography will stoke a fire, but the smoke it generates precludes enlightenment. In addition, in getting to know one’s subject, the biographer comes to like and defend him. To pen a hostile biography is a desolate task, especially over a decade, the period of time for which Berg studied Wilson. In the case of a president, let alone a war president like Wilson, to criticize one’s subject also feels downright treasonous.

The book market for its part reinforces these antianalytic tendencies in authors. Biography readers are like the voters whom Wilson looked down upon: they prefer personality to ideas. They enjoy the odd portrait of the villain: Hitler, Mao, Stalin. But most U.S. readers will not accept anything close to a vilification of an American president. As a result of some mix of these factors, Berg does not entirely achieve the “telling of the twentieth century” to which he aspires. He separates icon from man, as promised, but does not deliver the era. Wilson is just Wilson.

Perhaps a description of the full extent of Wilson’s folly requires not a biography but a general history. In Woodrow Wilson and the Roots of Modern Liberalism, Ronald Pestritto has carried out some of the work, but he focuses more on the sphere of philosophy than on quotidian society. In Bernard M. Baruch, a biography of Wilson’s adviser and financier of that name, James Grant captures some of the more unfortunate financial results of the Wilson administration. But more is required. If Wilsonian interventionism failed abroad, modern interventionists need to know more about why that happened. And if Wilsonian intervention in the economy failed at home, modern planners and presidents, including of course President Obama, need to know that, too. That Wilson could not recognize the damage he perpetrated hardly constitutes an excuse for historians to downplay it. The discussion over what variety of Protestant or narcissist Wilson was has been long, interesting and stimulating, but the next biographer would do well to focus on his policies in a more thorough and sustained fashion. America’s early progressives, presidents and others, require at this moment not canonization but invigilation.

Amity Shlaes, chairman of the board of the Calvin Coolidge Memorial Foundation, serves as director of the 4% Growth Project at the George W. Bush Presidential Center. She is the author of Coolidge (Harper, 2013) and The Forgotten Man: A New History of the Great Depression (Harper, 2007). 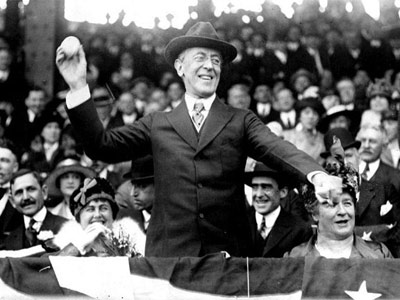