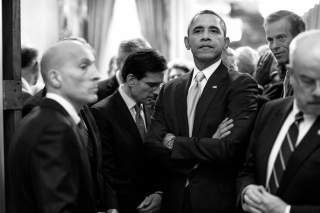 Of all the disappointments of the Barack Obama presidency, probably the greatest was his inability to honor his campaign commitment to change the political culture in Washington. Nearly everyone agrees that he came to power at a time of poisoned politics in the nation’s capital. He promised to change that. No one can credibly argue that things are better now. But there remains widespread and intense disagreement on who bears the blame for the ongoing rancor of our national politics some five years into the Obama presidency.

Looking at it from the standpoint of how American politics works, the blame rests with Obama.

During his initial 2008 presidential campaign, Obama promised to “turn the page on ugly partisanship in Washington so we can bring Democrats and Republicans together to pass an agenda that works for the American people." On another occasion, he declared that "the time has come to move beyond the bitterness and anger that’s consumed Washington….To build a coalition for change that stretches through red states and blue states….We’re choosing unity over division."

There’s no doubt that this lofty aspiration and Obama’s eloquence in expressing it contributed to Americans’ positive response to his candidacy. The Washington Post’s Dan Balz, one of the country’s leading political analysts, wrote that “the aspiration to create a post-partisan politics gave a special lift to his candidacy and created an outsized expectation for his presidency."

Obama’s failure to redeem that promise has generated abundant commentary over the years, and it has generally fallen into three categories.

First, Obama supporters have placed the blame squarely on Republicans. “We met an implacable opposition in the Republican leadership," said presidential acolyte David Axelrod. Former White House chief of staff Rahm Emanuel added, referring to the congressional opposition, “If you decide before you listen what your position is, it’s really hard to build trust, cooperation and openness."

This is lame. Obama didn’t promise to change the political culture in Washington if the Republicans would let him. He issued his promise unconditionally. That placed a burden on him to find a way to make it work.

Second, many in the news media have simply dismissed the promise as impossible to fulfill in our time of polarized politics and hence not something to fret much about. A New Yorker writer described the promise as “not just naïve but delusional." Balz wrote that, in light of subsequent events, it sounds “quaint, even naïve." Obama himself acknowledged to Oprah Winfrey that he wasn’t able to alter Washington’s “tone" as much as he thought and was “probably…overly optimistic." This is a cop-out. It might have some resonance had Obama made a serious and sustained effort to operate in a new political style, searching for a new political paradigm to replace the tired old nostrums contributing to governmental gridlock. But he didn’t.

Third, Republicans blame Obama for not reaching out to them at the start of his presidency, when he was pushing for a stimulus package to combat the recession that then had the nation in its grip. According to this view, expressed by House Speaker John Boehner, Republicans were prepared to work with Obama on that legislation but were stiffed in favor of a partisan approach in which Democrats took exclusive control of the process.

Here’s where we get to the crux of Obama’s failed promise. Gridlock and political rancor occur when the parties cling to old ideas that no longer work, when events have moved beyond old political paradigms but politicians can’t bring themselves to shed them. That was the situation in 2009, when Obama became president. But, instead of crafting new paradigms for a new era and seeking to sell it them the American people (thus bringing new pressure on Washington to adjust to a changing nation), he doubled down on the tired old Democratic notions of income redistribution, class conflict and governmental aggrandizement.

It didn’t work. His greatest accomplishment in this realm was the Affordable Care Act, and this injected more rancor and political poison into the body politic than any other legislation of the past generation. As with his stimulus package, also a throwback to old Democratic formulas, Obama got his Obamacare legislation through Congress without a single Republican vote.

Thus, it wasn’t merely a matter of getting Democrats and Republicans to work together in the context of the old politics, which Obama had no intention of doing anyway. It was a matter of crafting a new brand of politics—growth strategies, tax reforms, entitlement initiatives, infrastructure projects, new foreign-policy thinking—all aimed at busting past the old political fault lines and creating new political coalitions.

That’s what great presidents do. If we look at the presidencies of Jefferson, Jackson, Lincoln, the two Roosevelts and Reagan, we see that each scrambled up the old terms of debate and in the process created new governing formulations that propelled the nation in new directions. And they did it in conversation with the nation at large, not just with the pols of Washington.

That’s how presidents can break up deadlocks and lance the boils of rancor and nastiness that are the product of deadlock. Obama, upon taking office, was blessed with a grand opportunity to do that, too, given his winning political style, his significance as the country’s first black president, the goodwill he enjoyed at that time, and the nation’s hunger for new solutions to new threats and challenges.

He failed, and in the process failed also to redeem a promise he made, with apparent solemnity, to the American people when asking for their votes.

Editor's Note: This piece first appeared in February. It is being reposted due to reader interest.