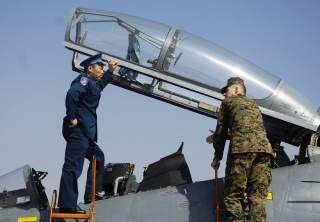 "Access denial" is a misnomer. Or rather, it oversimplifies, implying that either the door is wide open or a coastal state like China slams the door shut to all foreign shipping and aircraft, military and commercial. Not so. Selective access denial is a more accurate term for Chinese strategy. Beijing covets control over passage through regional sea and air routes, and it wants others to acknowledge its say-so. It has no quarrel with commercial access. It welcomes trade. Nor is military access entirely off-limits. China wishes only to curtail certain types of martial endeavors. At sea it concedes freedom of navigation for foreign merchantmen and warships. The same goes for aircraft transiting the air-defense identification zone (ADIZ) it proclaimed in the East China Sea recently.

That sounds harmless at first blush. But Chinese officials are quick to insist that navigation means navigation—the right to pass through, and nothing more. Beijing, that is, accepts that others will use the sea-lanes as a thoroughfare for transportation but denies their right to conduct activities that enhance readiness for combat. Surveillance flights, underwater surveys, and aircraft-carrier flight operations are some undertakings China wants to proscribe—much as the law of the sea forbids these activities in the "territorial sea" within 12 nautical miles of a coastal state's shorelines. In effect Beijing demands that ships and aircraft transiting seas and airspace it claims obey the "innocent passage" rules governing territorial waters.

U.S. officials such as former Secretary of State Hillary Clinton unwittingly encourage China to interpret seafaring states' rights narrowly. They phrase U.S. national interests in terms of freedom of navigation rather than freedom to use the global commons without interference. Hugo Grotius, the father of the law of the sea, called unfettered use of the oceans mare liberum, the free sea. Freedom is about more than mere transportation. For naval historian Alfred Thayer Mahan, waters beyond the territorial sea were a "wide common." No one needed permission to use them. It behooves Washington to debunk Beijing's linguistic sleight-of-hand, restoring the commons to its rightful place at the center of the maritime order. Freedom of navigation, U.S. officials must insist, is indivisible from the other freedoms Grotius and Mahan espoused, and that the UN Convention on the Law of the Sea codifies. Access is access.

Which brings us back to selective access denial. By cheerfully ratifying most uses of the commons, China has turned cost/benefit logic against the United States. Strategic theorist Carl von Clausewitz teaches, sensibly enough, that the value a nation assigns its political goals determines how much effort—treasure, hardware, lives—it expends to obtain those goals, and for how long. Should Beijing try to bar foreign access to Asian seas and skies entirely, it would simplify the problem for Washington. No U.S. president could tolerate blanket access denial. Prying and keeping the commons open would warrant an effort of maximum "magnitude" and "duration," to borrow Clausewitz's words. Straightforward Chinese challenge, straightforward U.S. reply.

Instead, though, China is daring America to mount a massive effort to defend things of seemingly trivial importance. How much, ask Chinese officials sotto voce, is Washington prepared to pay for the right to execute a surveillance flight or an undersea survey? But if U.S. leaders do what Clausewitzian logic suggests they ought—forego an expensive enterprise whose payoffs appear small—then they will have in fact conceded something of immense worth. Namely, they will have sacrificed the principle of the open commons, admitting that strong regional powers can dictate the terms of access to offshore expanses. Far from being about ephemera, then, selective access denial strikes at the heart of the U.S.-led liberal order. One suspects that's the point.

The commons is an idea as much as anything. Letting some coastal state selectively abridge freedom of the seas and skies in one region could corrode that idea over time, imposing baneful effects not just in Asia but across the globe. U.S. leaders must put Beijing on notice that they understand a principle is at stake in the brouhahas over the ADIZ, the South China Sea and other Asian hotspots. And that they consider that principle worth defending—whatever the cost.