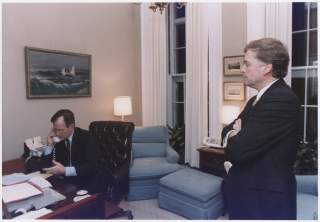 Bush decided that spring to shift the focus of U.S.-Soviet diplomacy from nuclear disarmament to the long-term future of Europe with the fate of Germany potentially on the table. Western Europe appeared on a path toward economic and political integration, yet there was tremendous anxiety. What of the huge Soviet army that remained the largest force on the conti­nent? Would a unified Western Europe be responsible for its own defense? These were the types of questions the Bush team thought that the Rea­gan administration, in its exuberance to reduce nuclear weapons and take Gorbachev at his word, had neglected. Indeed, Gorbachev had pledged to withdraw half a million troops from central and eastern Europe. “Even with these reductions,” Bush wrote in a February 16, 1989, response to a Japanese newspaper, “the Warsaw Pact has far to go to correct the conventional forces imbalance in Europe.”[36]

On May 15, 1989, Baker’s deputy, Robert Zoellick, sent his boss a memo in advance of the upcoming NATO summit urging him to enunciate the “common values of the West”—democratization, market systems, individual rights, and free associations—in the context of drawing “Eastern Europe and the USSR into the ‘community of nations.’” The goal should be to end “the division of Europe on our terms,” to contrast “common values of the West” with “Gorbachev’s more narrow, territorial concept of the Common European House.”[37]

Zoellick saw Germany as “the real opportunity to get ahead of the curve and to exceed expectations.” Official NATO documents dating back to the 1950s stated German reunification as a long-term goal. “And there’s no doubt the topic is coming back,” he wrote. “The real question is whether Gorbachev will grab it first.” Or the Germans might grab it themselves— “especially after Honecker passes from the scene.” Zoellick advocated an ini­tiative built upon the “tear down the Wall” rhetoric, one that would include “freer and more open links between the two Germanies, in the areas of com­munications, flow of information, movement of people, aviation (building on our Berlin Air proposal so as to include German participation), and the environment.” Why not call for a Berlin Olympics in 2000, he asked, where athletes from “the two Germanies” could compete on one team?[38]

Bush was already speaking out more forcefully. Three days before Zoellick’s memo, the president delivered a speech in College Station at Texas A&M University. “Wise men—Truman and Eisenhower, Vandenberg and Rayburn, Marshall, Acheson, and Kennan—crafted the strategy of contain­ment,” he told the graduating Aggies. “They believed that the Soviet Union, denied the easy course of expansion, would turn inward and address the contradictions of its inefficient, repressive, and inhumane system. And they were right—the Soviet Union is now publicly facing this hard reality. Con­tainment worked.”[39] Opportunity beckoned the United States to go further. “Our goal is bold,” Bush stated, “more ambitious than any of my predeces­sors could have thought possible. Our review indicates that 40 years of per­severance have brought us a precious opportunity, and now it is time to move beyond containment to a new policy for the 1990s—one that recognizes the full scope of change taking place around the world and in the Soviet Union itself.” Bush raised the stakes from containing Soviet expansionism to some­thing new: “We seek the integration of the Soviet Union into the commu­nity of nations.” This could be achieved, Bush went on to say, if the Soviets reduced arms, tore down the Iron Curtain, gave up meddling in the Third World once and for all, expanded human rights and pluralism, and joined the international fight against the drug trade and environmental degradation.[40]

Two weeks later, Bush took this message to Europe. He now incorpo­rated some of Zoellick’s suggestions. The administration’s “policy is to move beyond containment,” he declared on May 31, 1989, in Mainz, Germany. “For 40 years, the seeds of democracy in Eastern Europe lay dormant, buried under the frozen tundra of the Cold War. And for 40 years, the world has waited for the Cold War to end. And decade after decade, time after time, the flowering human spirit withered from the chill of conflict and oppression; and again, the world waited. But the passion for freedom cannot be denied forever. The world has waited long enough. The time is right. Let Europe be whole and free.”[41]

Tentatively, Bush was laying out the concrete terms on which the Cold War might end: when Europe was whole and freedom triumphed. And “the momentum for freedom does not just come from the printed word or the transistor or the television screen,” he proclaimed in Mainz, “it comes from a single powerful idea: democracy.” In other words, the Cold War could end when the Soviets withdrew from the GDR and Eastern Europe, when those countries became democracies. Bush hoped this process could occur peacefully, yet history gave no assurance that this was possible. Pressures had welled up against communist regimes in 1953, 1956, 1968, and 1981 only to be met by force. American presidents had tripped over themselves extolling the superiority of democratic capitalism. And yet, for forty years, the Cold War had persisted.

The bottom line was that only the Kremlin could ensure that the end of the Cold War happened peacefully. “OK, so long as the programs do not smack of fomenting revolution,” Scowcroft wrote on a USIA proposal for a “democratic dialogue” with Eastern Europe in June.[42] At the same time, the Bush administration had no desire to broker a deal that conceded continued Soviet domination of Eastern Europe for peaceful liberalization. Facing a hostile congress and distrusting conservatives, Bush could not afford to be seen as concocting “Yalta II.” His priorities were to insure that reforms in Eastern Europe continued peacefully; to broach the German question delicately; to seek conventional arms reductions; and to respond intelligently, imaginatively, and swiftly to events that no one could predict.

The following has been republished due to reader interest. It was orginally published in March.

[6] “Address on Administration Goals Before a Joint Session of Congress," February 9, 1989, available at http://bushlibrary.tamu.edu/research/public_papers.php?id=51%20&year=%20...

[20] As Giovanni Arrighi puts it: “The mobilization of the world's finan­cial resources to rescue the U.S. economy from the deep recession of the early 1980s, and simultaneously to escalate the armaments race with the USSR, transformed the United States into the greatest debtor nation in world history, increasingly dependent on cheap East Asian credit, labor, and commodities for the reproduction of its wealth and power.” Giovanni Arrighi, “The World Economy and the Cold War,” in Cambridge History of the Cold War, eds. Leffler and Westad, 3:41.

[22] “Memorandum of Conversation: Telephone Call from the President to Chancellor Helmut Kohl of West Germany,” June 23, 1989, available at www.margaretthatcher.org/document/B1E15262B42B47749865ACF3306DE0AB.pdf