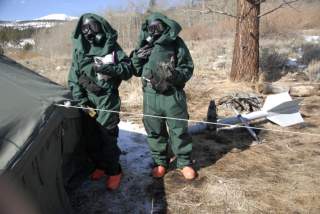 “If you set a red-line, you should stick to it,” remarked a Japanese defense official at a recent conference on extended deterrence in Seoul when asked about the U.S. approach to dealing with Syria. But the question on redlines has shifted from chemical weapons use itself to the idea of credibility and the implications of inaction towards Washington’s key allies around the world.

Iran’s nuclear program is often cited first but there is also the complex situation on the Korean peninsula. Secretary of State John Kerry told the U.S. Senate last week that “North Korea is hoping that ambivalence carries the day. They are listening for our silence.” This point was also brought up this past week by James Miller, U.S. Undersecretary of Defense for Policy, while meeting with Chinese officials in Beijing, “I emphasized the massive chemical weapons arsenal that North Korea has and that we didn't want to live in a world in which North Korea felt that the threshold for chemical weapons usage had been lowered.”

In real terms though, the question on Washington’s credibility vis a vis North Korea has less to do with calculations in Pyongyang on U.S. will to deter and more to do with adequately reassuring American allies (Japan and South Korea) that the Obama administration will not tolerate such provocations. As Scott Snyder from the Council on Foreign Relations noted last week, “A precision strike to teach Syria a lesson on WMD use will not deter North Korea from building a capacity to directly threaten the United States or from using WMD if it deems necessary. It may instead strengthen the position of North Korean hardliners that it must build this capacity to strengthen deterrence.” And Snyder is right to point out that the North has already crossed these red lines on WMD continually with relative impunity.

Indeed, reassuring Japan and South Korea of the U.S. commitment to extended deterrence is crucial, but failing to launch a kinetic attack on Syria would not submarine all of the efforts over the past several decades to tighten this commitment. Rather than focusing only on credibility with the North Korean case, it is important to shift back to the threat of Pyongyang’s extensive chemical and biological weapons (CBW) program. The North’s intransigence on its nuclear-weapons program is well detailed, but the consistent build-up of its CBW arsenal has attracted less attention.

North Korea isn’t a state party to the Chemical Weapons Convention (CWC), which bans the production, stockpiling and use of chemical weapons and their precursors. As a result of this, and due to the closed nature of the regime, Pyongyang has never been subject to inspections of its chemical industry facilities or sites believed associated with its CW program. Despite this, there is little debate about the existence of the North’s CW program.

Much less clear are the scope of the CW program and its level of advancement. According to the Korea Research Institute of Chemical Technology, North Korea has four military bases equipped with chemical weapons, eleven facilities where chemical weapons are produced and stored, and thirteen locations where research and development is carried out relating to chemical weapons. Moreover, most intelligence assessments concur that the North has produced all of the main chemical agents, such as nerve (including VX gas), blood, blister and choking agents. There is less certainty regarding the amount of chemical agents stockpiled by the regime, although estimates range from 1,000 to 5,000 tons. However, even if the North’s program is at the low end of estimates, its capacity is bolstered by the fact that its military has a variety of sophisticated delivery vehicles for CW attacks including missiles, artillery and airborne bombs.

While Pyongyang publicly denies the need for transparency on its CW program, its production of biological weapons is muddied and concealed by weak international non-proliferation standards. Unlike the Organization for the Prohibition of Chemical Weapons (OPCW), which has robust verification standards, the Biological Weapons Convention (BWC) is plagued by the failure of its members to agree on a universal verification mechanism that would adequately ensure that all state parties are held to account for their treaty commitments. Pyongyang has taken advantage of the BWC’s verification gap by using its position as a state party to the BWC in order to blanket accusations that it continues to produce and maintain biological weapons.

The South Korean defense ministry claims that North Korea has possession of several biological agents such as anthrax bacterium, botulinum and smallpox – all of which can be weaponized. However, South Korean and U.S. intelligence assessments about North Korea’s BW program remain highly speculative due to the nebulous nature of biological agents and their use. The thorniest issue between members of the BWC relates to the dual-use nature of biological agents and how to determine whether a program is peaceful or intended for nefarious purposes. The global science industry relies on the research conducted by studying biological materials. However, from an international security perspective, there’s the potential that this dual-use research could be diverted into a biological-weapons program.

Why does North Korea matter when discussing Syria? The CBW threat emanating from Pyongyang isn’t limited to the Korean Peninsula. North Korea is widely known for its horizontal proliferation of WMD and related materials to autocratic regimes around the world, especially Syria. But this is not only a question of proliferation. While North Korea’s CBW program provides little additional deterrence to the U.S. that its nuclear weapons program does not, it does add another tool for leverage in the event of internal unrest or even a protracted conflict with the US and South Korea in which Pyongyang correctly determines that nuclear weapons use in theater would be its final play.

But the most important development here is not so much the threat but more the opportunity it presents. The use of CW is abhorrent and contradicts international norms. If the international community is able to secure and destroy Syria’s chemical weapons (still a dubious task), this will send a stronger message North Korea than any tailored military strike.

J. Berkshire Miller is a SPF fellow and co-chair of the Japan-Korea Working Group with the Pacific Forum CSIS.

Editor's Note: This piece was orginally posted to TNI on September 13, 2013 and is being reposted due to reader interest.