Nothing New About China's New Concept 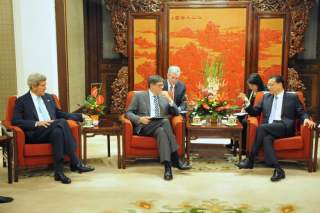 During a recent trip to Beijing to advance this weekend’s U.S.-China presidential meetings, outgoing national-security adviser Tom Donilon spoke of “building a new model for relations between great powers.” In doing so, Donilon repeated a new Chinese buzzword for the bilateral relationship created by Xi Jinping, “New Type of Great Power Relations,” which seems to resonate with U.S. concerns about a rising China.

China’s vision of a “New Type of Great Power Relations” may sound as though it is an answer to former secretary of state Hillary Clinton’s challenge for Beijing and Washington “to find an answer, a new answer to the ancient question of what happens when an established power and a rising power meet.” But nothing could be further from the truth. This Chinese concept is a new façade on the old rhetoric of peaceful coexistence.

When most observers around the Beltway discuss a “New Type of Great Power Relations,” they suggest Beijing does not have a clear idea or intention behind the concept. But Chinese officials have clarified what the concept means in essays and speeches, even at the highest levels of government.

The Chinese Foreign Ministry offered the first full-fledged elaboration of the “New Type of Great Power Relations” last June in an essay co-authored by Cui Tiankai, then a vice foreign minister and now ambassador to the United States. The essay identified five basic elements for consideration: mutual benefit as the foundation for relations; intertwined interests based on commerce; institutionalization of contacts and communications; people-to-people relations as a driving force; and expansion of international coordination and cooperation.

Cui and his foreign ministry co-author Pang Hanzhao, however, both implied and explicitly stated that for the United States and China to achieve this new model would require substantial changes in Washington. For example, the United States has interfered in Chinese core interests while Beijing has stayed out of U.S. affairs, requiring changes in Washington’s policies toward Taiwan, human rights, and the region. Moreover, by taking commerce as a basis for defining interests, Beijing conveniently avoids any security-based assessment of Chinese intentions and places a demand that the United States lift its export-control restrictions on military-related technology.

While the Foreign Ministry may not always be the most potent voice in foreign affairs, a recent speech by Xi Jinping’s suggest the ministry was speaking authoritatively. During his first international trip as both the state and party leader, Xi spoke at the Moscow State Institute for International Relations in April to announce a “New Type of International Relations.”

The reported contents of the March speech, however, provide only a litany of past Chinese principles for foreign policy. This includes the primacy of sovereignty as “matters within the scope of sovereignty are only for [a country’s] government and people to manage” and China’s commitment to safeguarding world peace and peaceful development. As the China Daily later explained, “This new concept of shared security is in stark contrast to the parochial approach, which tends to view security based on one's own interests and needs.”

What these Chinese voices have to offer is not anything that resembles a “pirated copy of the G-2 proposal” or a novel solution to the problems of Athens versus Sparta or Great Britain versus Germany. But what is noteworthy is that almost every article or statement involving China’s “great power” concept—most recently in the People’s Daily on June 3—notes that growing multipolarity is the trend of the times and that this phenomenon requires a reaffirmation of absolute sovereignty so that international relations can be democratized.

More than anything, this rhetoric is reminiscent of the “Five Principles of Peaceful Coexistence” that Beijing first promulgated in 1954: mutual respect for territorial integrity and sovereignty; mutual nonaggression; noninterference in internal affairs; equality and mutual benefit; and peaceful coexistence. Beijing has received little credit for these principles as empirical analysis showed that China “was more dispute prone than other most other major powers...[and] more likely to use a higher level of violence than other states in such a dispute.” China may not have been involved in grandiose expansionism, but the willingness to use force was palpable in the kind of territorial disputes now roiling East and Southeast Asia.

Nowhere in official Chinese elaboration of this “New Type of Great Power Relations” or the accompanying “New Type of International Relations” is any discussion of what compromises Beijing might need to make or even a basic recognition that U.S. interests also are at stake in the western Pacific. China’s response is simply that, as Xi Jinping said, “the vast Pacific Ocean has ample space for China and the United States.” Cui and Pang suggested that this geography militated against shared core interests, implying that the United States did not have long-standing policies or interests that would need to be reevaluated as part of accepting a “New Type of Great Power Relationship.”

If the United States were to accede to a “new type” of relations, then Washington would have to make a number of changes. Apart from abandoning commitments to Taiwan and human rights as well as export controls on sensitive technologies, the United States also would have to step away from its alliances with Japan and South Korea, stop its support for UN Law of the Sea-based interpretations of maritime sovereignty, and concede a sphere of influence to China irrespective of what regional actors want.

In his speech to the Asia Society on March 11, 2013, Donilon was right to state, “There is nothing preordained about such an outcome. It is not a law of physics, but a series of choices by leaders that lead to great power confrontation...A better outcome is possible. But it falls to both sides.” One question then remains: does acceding to a “New Type of Great Power Relations” create a better outcome at price worth paying? The answer is probably not—at least until Beijing starts to consider what are acceptable Chinese compromises with U.S. prerogatives.

In sum, Donilon echoed a Chinese concept that does little to address U.S. interests and reiterates a set of principles for the U.S.-China relationships that are unpalatable for Washington. This misstep keeps with the long U.S. practice of over-promising to Beijing that goes back to Henry Kissinger’s promises on Taiwan and the Third Communiqué. Contrary to their defenders, this over-promising does not allow the Chinese to save face. Instead, it creates unmet expectations, which leads to frustration in Beijing as subsequent Americans deny them the fruits of past promises.

With so many other real issues challenging the two sides, it would seem better to avoid such unnecessary frustrations. In this light, giving any policy significance to the “New Type of Great Power Relations” seems like a bad idea, no matter how well it resonates rhetorically with U.S. questions about integrating a rising power into an established order.

Peter Mattis is Editor of China Brief at The Jamestown Foundation.