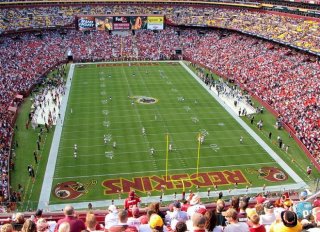 Despite beginning with high hopes, the Washington Redskins have taken a beating this year: on the football field, in the media, and on their quarterback’s surgically repaired knee. But nothing could have prepared the beleaguered team for the all-out assault on its suddenly politically incorrect eighty-year-old name.

In August, a popular liberal online magazine announced, “This is the last Slate article that will refer to the Washington NFL team as the Redskins. "While Slate is an outlier in this regard, it is not unique. The sportswriter and political commentator Gregg Easterbrook, writers at the Buffalo News and the Philadelphia Daily News and a few other outlets—a “growing list,” sports commentator Jay Busbee assures us—eschew the name.

Bob Costas denounced the Redskins name as an “insult, a slur,” on NBC’s Sunday Night Football during a game between Washington and the Dallas Cowboys. President Obama told the Associated Press that if he owned the Redskins, he would consider changing the team’s name. "I don't know whether our attachment to a particular name should override the real legitimate concerns that people have about these things," he said. Perhaps more importantly, NFL Commissioner Roger Goodell has signaled it might be time to consider a name change.

Not everyone has been as measured in their criticism of the team name as Obama, Costas or Slate editor David Plotz. USA Today columnist DeWayne Wickham argued that the controversy proved Redskins owner Daniel Snyder is “no misguided good guy.”

“To give him that absolution is to allow for the possibility that there were good slave owners, Wickham continued. “To accept the argument that he is a well-meaning innocent, who mistakenly persists in using an offensive slang as his team's moniker, gives credence to those who draw a coddling distinction between a segregationist and a racist.”

Well. At the risk of making coddling distinctions, proponents of the team name change have failed to persuade. In fact, the more nuanced among them have acknowledged facts that undermine their case, which is why some might prefer turning this into a battle against Jim Crow or the antebellum South instead.

But let’s start with the good points raised by the people who think the Redskins name belongs on a reservation for banned words. Words do mean different things to different people in different times. Even when no bad intentions are involved, it is good to avoid needlessly giving offense. Respecting the feelings of others about word choices, and especially the feelings of people who belong to groups that have experienced discrimination or marginalization, is the hallmark of a tolerant society.

Moreover, those are precisely the kinds of considerations that would enter into a decision about whether to change a controversial team name. The president put it well “I don't think there are any Redskins fans that mean offense,” Obama said, but if the name “was offending a sizeable group of people, I'd think about changing it.”

So is the name offending a sizeable group of people? According to an Associated Press-GfK poll taken earlier this year, 79 percent opposed changing the team’s name while 11 percent were in favor. A survey that attempted to assess Native American opinion on the matter found that nearly 90 percent didn’t find the term “redskin” offensive.

The Oneida Indian Nation, which has pushed the name change, did commission a poll of D.C.-area adults finding that 59 percent of American Indians would have the right to be offended if called “redskins.” The same survey showed 55 percent said their support for the team wouldn’t be affected by a name change, while 25 percent said they’d support the team less and 18 percent would back the team more.

But even these results stop well short of establishing that the team name offends many people. It merely shows that most Redskins fans, reasonably enough, would be willing to accommodate them if it really did. But the name mainly seems to bother activists who are offended for a living and fellow travelers for whom it is a source of moral prestige to be offended on someone else’s behalf.

The sudden escalation of the Redskins team name controversy is not the result of an organic shift in public opinion where the term has gradually grown to offend more people. This isn’t a case of evolving standards of decency. It is a controversy manufactured by select people, exercising raw political and cultural power.

It’s undeniable that the Washington football franchise has a mixed legacy with race, going from racist owners and a segregated locker room to being a team that advanced black quarterbacks and united a city across racial lines. Yes, the Redskins song once exhorted fans to “Fight for old Dixie!” But the blunt fact is that sports team names are not designed to be insulting or derogatory.

A team is named to depict its members and fan base in a positive light, emphasizing character traits that are beneficial in sports. No one would name a team the Washington Idiots (although such a name seemed justified during the worst moments of the Jim Zorn era) or the Baltimore Buffoons. There is a reason there is a team called the New England Patriots and not one named the New England Traitors. A team name almost by definition is intended as a compliment rather than a slur.

As even Bob Costas had to acknowledge during his on-air commentary about the Redskins’ perniciousness, American Indian-oriented team names emphasize bravery and nobility. Consider the Chiefs, the Braves, the Seminoles and the Warriors. To fail to see the Redskins name in these terms is to not understand what sports-team naming conventions are about.

The Redskins were named and the franchise came of age when Westerns held a great deal of sway in our popular culture. To be sure, many depictions of Native Americans during this time period were derogatory. But the main takeaway was respect for a noble warrior culture, however flawed and campy the presentation.

“When I think of the American Indian,'' Mafia boss Junior Gotti wrote a New York Times reporter in 1999, ''I think of their courage, strength, pride, their respect and their loyalty toward their brothers. I honor the reverence they share for tradition and life. These traits are hungered for in a society that is unfortunately plagued by those whose only values are self-centered and directed at others' expense. A society which seems to be forced to embrace the Judas, and liars.''

The point is not to cite a Mafia don—indeed, the son of John Gotti—as a character witness, but merely to show how far this image of the American Indian has permeated the culture in which the Redskins exist.

“The word redskin has a relatively innocent history” Plotz admitted in his anti-Redskins Slate piece. “As Smithsonian linguist Ives Goddard has shown, European settlers in the 18th century seem to have adopted the term from Native Americans, who used ‘red skin’ to describe themselves, and it was generally a descriptor, not an insult.”

Plotz even conceded that George Preston Marshall, the Redskins owner who chose the team name, “was almost certainly trying to invoke Indian bravery and toughness, not to impugn Indians.” So why is a change necessary? Because it is to his mind vaguely embarrassing, and we cannot live with something so tacky as “an old aunt who still talks about ‘colored people.’”

Confronted with the poll showing few Native Americans take offense to the term “Redskin,” activist Suzan Shown Harjo immediately questions the respondents’ credentials. “Are you a tribal person? What is your nation? What is your tribe? Would you say you are culturally or socially or politically native?” she asked, according to a D.C. CBS affiliate. Only those with the correct answers could have opinions.

Institutions should sometimes change even cherished customs and traditions out of respect for others. But this requires mutual respect, a desire to let other communities keep what is important to them without powerful reasons to the contrary. This is the difference between decency and political correctness. It is as fundamental as the difference between doing something because it is right and doing something at the behest of the politically and culturally powerful.

Perhaps someday public opinion will shift in a direction that necessitates a Redskins team name change. More likely, a small group of activists will wear everyone else down and people with more important things to worry about will decide it isn’t worth the fuss. You can make the case that the former is progress. The latter would make the Redskins name something to mourn.