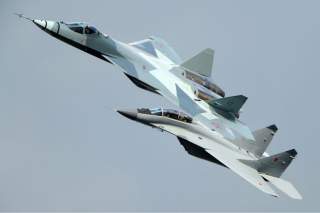 One of the distinguishing characteristics of Vladimir Putin’s presidency has been his commitment to revitalizing Russia’s military. Putin, who has noted that Russia’s perceived weakness makes it vulnerable to external pressure and internal disruption, is pushing for increased funding to transform the Russian armed forces from the debilitated remnants inherited from the old Soviet superpower military machine into a smaller, but more modern, mobile, technologically advanced and capable twenty-first century force.

In 2013, in an address delivered on the day devoted to the “defenders of the Fatherland,” the Russian president proclaimed: “Ensuring Russia has a reliable military force is the priority of our state policy. Unfortunately, the present world is far from being peaceful and safe. Long obsolete conflicts are being joined by new, but no less difficult, ones. Instability is growing in vast regions of the world.”

This is not empty talk. The rhetoric has been matched by a concurrent allocation of resources; Russia is now engaged in its largest military buildup since the collapse of the Soviet Union more than two decades ago, with major increases in defense spending budgeted each year to 2020. Putin has pushed for this program even over the objections of some within the Kremlin who worried about costs and the possible negative impact on Russian prosperity; opposition to the expansion of military spending was one of the reasons the long-serving Finance Minister Aleksei Kudrin left the cabinet several years ago.

The rest of the world is taking notice.

After years of thinking of Russia as “Upper Volta with missiles”—a nation which possessed a sizeable strategic nuclear stockpile but whose conventional forces had not particularly covered themselves with glory in their post-Soviet operations—Russian plans for military reform and rearmament have generated some concern, particularly in the U.S. national-security establishment, which had assumed that Russia would not be in a position to project much power across its borders. The resumption of bomber patrols in the Atlantic and Pacific oceans, the dispatch of task forces (particularly to the Caribbean), the 2008 campaign against Georgia, and the growing size and sophistication of the yearly joint maneuvers with the Chinese army and navy have all worked to resurrect the image of Russia as a military threat. Justification for U.S. defense expenditures, which previously focused largely on increases in Chinese spending, now take into account Russia’s military buildup as well.

Perusing budget reports and position papers, Russian plans—spearheaded by the Defense Minister Sergei Shoigu and Dmitry Rogozin, the deputy prime minister in charge of the defense industry—certainly look impressive—and ominous. If, only a few years ago, the shipbuilding budget for the Russian navy was less than 10 percent of the U.S. Navy, the Russians have now closed the gap and the Russians are, in terms of budgetary outlays, spending about half of what will be allocated to the U.S. Navy for new ship construction. By 2020, the Russian army will be structured around combat-ready and easily deployable brigades, with a goal of having those forces be at least 70 percent equipped with next-generation weaponry and equipment. If all goes according to plan, the Russian military, by 2020, will return to a million active-duty personnel, backed up by 2300 new tanks, some 1200 new helicopters and planes, with a navy fielding fifty new surface ships and twenty-eight submarines, with one hundred new satellites designed to augment Russia’s communications, command and control capabilities. Putin has committed to spending billions over the next decade to fulfill these requirements.

And a growing number of Russians support the military buildup. A Levada Center poll found that 46 percent of Russians were in favor of increasing military spending even if it led to an economic slowdown (versus 41 percent opposed if defense increases caused economic hardship). This is in part due to a growing fear that Russia’s vast natural resource endowment, particularly in the Arctic, is vulnerable if the country lacks the means to protect it. Rogozin himself has continuously warned that without a modern military force, Russia is liable to be “looted” in the future.

Yet there is often a noticeable gap between declared Russian intentions and executable results. To what extent are these ambitious goals realizable?

Some observers have been prepared to write off these plans as Potemkin posturing—or new and creative ways to transfer more of Russia’s state funds into private hands through creative, corrupt schemes. Certainly, any expansion of the military budget represents enormous opportunities for graft. But it would be a mistake to dismiss the clear evidence that this buildup is restoring capabilities to the Russian armed forces that had been lost after the collapse of the Soviet Union. In the last eighteen months, Russia conducted military exercises on a scale not seen since the end of the Cold War (such as the recently concluded military trials in the Far East). While still highlighting problems with command and control systems and with equipment, these nonetheless have also demonstrated that the reforms are starting to have an impact, and that Russia is capable of fielding a more mobile, effective force.

This concerns NATO a great deal. The North Atlantic alliance’s ability to conduct “out-of-area” operations, combined with the decision by most European countries to significantly reduce their defense spending, was predicated on an assumption that Russia no longer poses a threat. While no one is anticipating Russian tanks again poised to rush through the Fulda Gap, the American expectation that Europe could become a “security exporter” to other, more troubled parts of the world must now be revisited, since Russia is effectively reversing its “disarmed” condition of the 1990s upon which such calculations were based.

At the same time, however, the buildup will not be smooth sailing for the Russian government.

The first issue is whether Russia’s defense industry can actually produce the tools called for in the new defense strategy. Dmitry Gorenburg of the Center for Naval Analyses has noted that the plans released by the Ministry of Defense rely on overly optimistic assessments of how quickly Russian factories and shipyards can turn out new equipment—assuming that there will be no delays, technical or design problems, or bottlenecks. Design problems have already forced a two-year delay in implementing a state procurement order for thirty-seven Su-35 aircraft, which will not be fulfilled until 2016. Gorenburg and other experts argue that it is highly unlikely that the buildup will come close to meeting the stated targets.

Moreover, the Russian military-industrial complex is far from achieving a “zero-defects” standard when it comes to producing equipment. A string of missile failures (particularly with the Bulava submarine-launched ballistic missile), delays in releasing new ships (or in getting the retrofitted aircraft carrier Admiral Gorshkov/Vikramaditya ready for service in the Indian Navy), and issues with quality control in vehicles have all raised questions about the reliability of Russian-made military products.

There is also real concern about the health of Russia’s research and development sector and whether or not Russia can indigenously produce many of the technologies needed to produce fifth-generation weapons systems. Former defense minister Anatoly Serdyukov strongly resisted pressure to simply order slightly-newer variants of older, Soviet-era equipment, even though Russian industries were lobbying for increased state orders, and sought to import defense items from abroad, including drones from Israel, the Iveco light multirole vehicles from Italy, and the Mistral amphibious assault ships from France, as a way to equip the Russian military with newer technologies that could not be produced by domestic sources. (Finding ways to license or reverse-engineer foreign military technology will be one of the Russian defense industry’s major tasks in the coming decade). Discontent with Serdyukov’s willingness to turn to foreign suppliers, however, was one of the contributing factors in his removal as defense minister last year.

Serdyukov also attempted to reform the manpower structure of the Russian military, again arousing significant opposition by his efforts to reduce the size of the officer corps (especially the number of general and flag officers) and to push the Russian military away from reliance on the draft towards the development of a volunteer, professional force. But announced plans to increase the size of the standing army run up against Russia’s demographic realities. Russia has a labor shortage; the recovery of the Russian economy has diminished the surplus pool of excess labor that in years past would have been absorbed by the draft. Between deferments and the increase in health problems among some segments of the Russian population, some 60 percent of the draft-age population of young males is now ineligible for service. Efforts to make contract service more appealing (following some of the reforms undertaken in the United States in the shift to an all-volunteer force back in the 1970s) have had some successes, but while the Russian military has announced it will create forty new brigades (to augment the some seventy brigades already in existence) by 2020, it must also deal with the reality that many existing units are 25 percent or so understrength. Shoigu must continue reforms of how the Russian military recruits (and treats) its personnel—the compulsory draft and the harsh conditions created by the so-called dedovshchina system (the hazing of new recruits by their non-commissioned officers and other superiors) do not lend themselves to creating a more professional military force capable of attracting and retaining volunteers. The amount that must be spent—on increased salaries, perks and incentives—to attract more Russians to contract service may also be more than what the defense establishment is willing to pay.