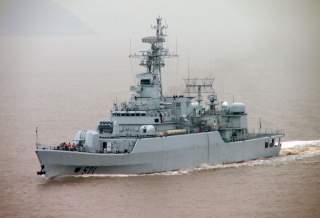 A seemingly quixotic impasse between Philippine and Chinese ships played out this week at Scarborough Shoal, 120-odd miles west of the Philippine island of Luzon. We say “seemingly” because it makes eminently good sense for China to dispatch lightly armed—or even unarmed—noncombat vessels to uphold its territorial claims in the South China Sea. That's what happened at Scarborough Shoal, where no Chinese warships got involved. Beijing's muted approach conforms to its pattern of calibrating deployments of force to the circumstances while holding overwhelming military might in reserve to deter or compel recalcitrant Southeast Asian states.

That's savvy diplomacy. It means using the least force necessary—including nonmilitary ships from its maritime surveillance and law-enforcement services, or “five dragons stirring up the sea,” as one Chinese author calls them. Sea power is about more than men-of-war and ship-launched aircraft, the high-profile implements that grace the cover of Jane's Fighting Ships. Shore-based missiles, aircraft, sensors and command-and-control infrastructure can influence events on the high seas. So can coast guards and maritime-enforcement agencies. Even privately owned assets like merchantmen and fishing boats represent an arm of sea power if they can transport war materiel, monitor foreign ship movements, lay sea mines and the like.

Viewing sea power as a continuum gives China's leadership a range of options, including brandishing a small stick to accomplish its goals. It can do so because Manila and other claimants to regional islands and seas know full well that Beijing may unlimber the big stick—in the form of People's Liberation Army (PLA) ships, warplanes and missiles—and wallop them if they defy its will. The future will probably witness more encounters like the one at Scarborough Shoal unless the Philippines deploys a counterweight to Chinese ambitions, either by accumulating sea power of its own or by attracting help from powerful outsiders.

Neither the Philippines nor any other Southeast Asian state is likely to amass sufficient physical power to stand alone against Chinese blandishments. That leaves balancing. But presenting a united front is hard for the Association of South East Asian Nations (ASEAN), the most obvious candidate to act as a balancing coalition. ASEAN is a notoriously loose regional consortium. True to form, its members have not yet mustered a consensus on the Scarborough Shoal standoff. Nor is the United States eager to take sides. Washington professes agnosticism toward conflicting maritime claims, insisting only that navigational freedoms be preserved.

The vagaries of coalition politics, then, could determine Manila's fortunes at Scarborough Shoal and in future showdowns. Beijing has displayed an impressive capacity to learn from its mistakes since 2010, when its hamfisted tactics frightened China's weaker neighbors into making common cause among themselves and with the United States. “China is a big country and other countries are small countries, and that's just a fact,” proclaimed China's foreign minister in one shockingly undiplomatic exchange with his Singaporean counterpart.

The unsaid but unmistakable message behind such in-your-face statements: “Get used to it.” That's a message minor powers situated near major ones take to heart. Hence Southeast Asians' receptiveness to diplomatic and military cooperation with one another and with outsiders like the United States, India and Japan.

China wants to reduce Southeast Asians' newfound propensity for balancing. Since 2010, realizing the error of its ways, Beijing has prosecuted its maritime claims with a lighter hand. For insight into China's small-stick diplomacy, consider military theorist Carl von Clausewitz. Clausewitz is all about pummeling enemy armies, but in passing he urges statesmen to look for opportunities to disrupt the “community of interest” binding together an enemy alliance.

This might not prove too difficult, he implies. After all, “One country may support another's cause, but will never take it so seriously as it takes its own.” Allies and coalition partners contribute token forces unless their survival is at stake, and they look for the exit when the going gets tough. By exercising restraint, then, Beijing can hope to divide and conquer. And indeed, Chinese leaders insist on treating Southeast Asian governments on a one-to-one basis. That keeps ASEAN members from pooling their diplomatic and military resources.

Indeed, Beijing is evidently expanding the five dragons faster than the PLA Navy. The maritime-enforcement services are recruiting new manpower while taking delivery of decommissioned naval vessels. Furthermore, Chinese shipyards are turning out state-of-the-art cutters like sausages. Many are capable of sustained patrols in the farthest reaches of the China seas, assuring that China can maintain a visible presence in waters where it asserts sovereign jurisdiction. Indeed, Haijan 84, one of China's most modern law-enforcement vessels, occupied the epicenter of this week's imbroglio. Not the navy but China Marine Surveillance, an agency entrusted with protecting China's exclusive economic zones, dispatched Haijan 84to the scene.

First, using coast-guard-like assets reinforces China's diplomatic messaging. Sending warships to shoo away Philippine ships would indicate that China accepts that it is competing for territory claimed by others. Sending enforcement vessels, by contrast, matter-of-factly signals that China is policing sovereign waters. Chinese skippers can act against foreign vessels while diplomats condemn Southeast Asian governments for infringing on China's sovereignty and violating domestic law. Furthermore, relying on non-naval vessels partially inoculates Beijing against the charge that it is practicing gunboat diplomacy. China's narrative: this isn't diplomacy at all, it's routine law enforcement!

Second, the lopsided power mismatch between China and ASEAN dictates a softer touch. Beijing can afford to deploy lightly armed ships against maritime rivals whose navies barely rate as coast guards. PLA Navy involvement would constitute an overmatch in most cases. Imagine the press photos if a tip-of-the-spear Chinese frigate or destroyer faced off against an outclassed Philippine Navy vessel. China would look like a bully in regional eyes.

For instance, the first Philippine vessel to respond off Scarborough Shoal was flagship BRP Gregorio del Pilar. The Gregorio del Pilar—the pride of the Philippine Navy fleet—is a U.S. Coast Guard hand-me-down of 1960s' vintage. Though grandiosely rebranded as a frigate, it boasts minimal combat capacity. There's little doubt who would prevail in a hypothetical battle. But while Godzilla can squash Bambi, his public image suffers. Relying on the maritime-enforcement services limits the chances of a diplomatic debacle without forfeiting Chinese interests.

Fourth, nonmilitary vessels empower Beijing to exert low-grade but unremitting pressure on rival claimants to South China Sea islands and waters. Constant patrols can probe weaknesses in coastal states' maritime-surveillance capacity while testing their political resolve. Keeping disputes at a low simmer, moreover, grants China the diplomatic initiative to turn up or down the heat as strategic circumstances warrant.

And if all else fails, Beijing can employ its navy as a backstop to the civilian agencies. That China—unlike its weaker rivals—has the option of climbing the escalation ladder only amplifies the intimidation factor in places like Scarborough Shoal or the Spratly Islands. Indeed, the mere threat of naval coercion may induce an opponent to back down in a crisis. Innocuous in themselves, the five dragons' peacetime patrols carry significant weight when backed by the firepower of a great fleet—and Manila knows it.

Given the strategic benefits of nonmilitary sea power, maritime-law enforcement promises to remain a growth industry in China in the coming years. Beijing can hope to achieve its goals through discreet methods while applying a solvent to any opposing coalition before it solidifies. That would be an impressive feat of nautical diplomacy, and it could succeed. It behooves the United States and its Southeast Asian allies to pay as much attention to unglamorous civilian ships—China's small stick—as they do to big-stick platforms that dominate headlines.

Scarborough Shoal is a harbinger of things to come. Never overlook the political value of ships just because they don't bristle with guns and missiles.

James Holmes is an associate professor of strategy at the U.S. Naval War College, where Toshi Yoshihara holds the John A. van Beuren Chair of Asia-Pacific Studies. They are the coauthors of Red Star over the Pacific, an Atlantic Best Book of 2010. The views voiced here are theirs alone.