The U.S. Air Force For Dummies 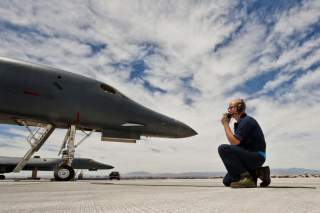 Editor's Note: This piece was orignally published in January 2014 and is being recircualted due to popular request.

After reading Robert Farley’s December 2013 Foreign Affairs article, calling for the elimination of an independent Air Force, George Fielding Eliot’s October 1941 Foreign Affairs article, opposing the creation of an independent air force, came to mind. If the old saying, “imitation is the highest form of flattery,” is true, Eliot would find Farley’s recent article awfully flattering. What distinguishes Eliot from Farley is not that they differ in their arguments—they are virtually the same. But, Eliot did not have sixty-five years of experience to draw from.

While Farley’s critique of the Air Force is riddled with factual errors, missing context, and no distinguishable understanding of airpower, he does posit a notion that may appeal to budget hawks. To their credit, Robert Spalding and Michael Bob Starr have already discredited Farley, highlighting the glaring flaws in his work. However, in concentrating on specific factual inaccuracies, neither had the space to focus on a broader explanation of airpower and the larger purpose of an independent Air Force.

The story of the first army and the first navy was certainly similar. Had men been born with wings, air forces would have come first, but as surface bound creatures, we began fighting on land before we developed the warship and eventually the airplane. If and when countries begin putting weapons in space, we will likely see the creation of a United State Space Force—just as we may soon see the creation of an independent cyber force.

In short, each domain (space, cyber, air, sea, and land) provides those who operate within them a unique perspective on warfare that is rarely understood by those operating in another domain. As an academic enchanted with the Navy, Farley should understand this since it was eloquently discussed by Rear Admiral J. C. Wylie more than forty years ago. Contrary to Farley, the Army Air Forces clearly demonstrated their ability to shape conflict during World War II. Thus, the creation of an independent air force was little different than the creation of an independent army or navy.

In offering a parochial critique of the Air Force, Farley fails to examine warfare from the perspective of a campaign planner, which is far more useful when discussing the role of each service in war. Prior to laying out a campaign plan, it is important to answer three questions; what are the objectives (ends) of the campaign; how (ways) will those objectives be achieved; and, what (means) tools are needed to achieve them?

It is the president who is largely responsible for answering the first question, with airmen, soldiers, sailors, and marines answering the latter two. While the joint force commander is responsible for the overall campaign plan, airmen are largely responsible for the air and space domains; soldiers the land domain; sailors the sea domain; marines the intersection of land and sea; and all services the joint cyber domain. Thus, each service offers a unique perspective on how best to address questions two and three.

Contrary to Farley’s assertion—an independent air force leads to more inter-service rivalry, therefore get rid of it—the vigorous debate that often occurs when the services present alternative courses of action and approaches to conflict is a good thing. As the old proverb says, iron sharpens iron. What would be far more detrimental for the nation is for the Joint Chiefs of Staff to always speak with one voice. Competition of ideas and approaches leads to innovation in the Pentagon, just as it does in the private sector.

A recent example comes to mind. In the fall of 2009, President Obama was approached by Secretary of Defense Robert Gates with a request for large troop increases in Afghanistan as part of the then-ISAF commander, General Stanley McCrystal’s new strategy. The President was unhappy with the strategy. Rather than offering alternative options, as President Obama sought, the services rallied behind the McCrystal plan. The President only reluctantly accepted his sole option—scaled down.

In this case, an incorrect understanding of “jointness” by the services was the problem. Joint does not mean going along to get along. It means articulating the virtues of operations in each domain and each service’s ability to operate in their respective domain. The nation should no more expect the respective service chiefs to walk in lock step than it should expect the nation’s college professors to do the same.

While the purpose of each service is to organize, train, and equip forces to present superior capabilities to a combatant commander, a more straight forward explanation of each service’s primary role may be instructive. In short, the Air Force can deliver effects across the spectrum of conflict and at every level of war, with a special focus on power projection (long range strike, airlift, and aerial refueling); air superiority; and global surveillance and reconnaissance. The Navy patrols the sea lines of commerce and communication, while also providing a persistent offshore presence. The Marine Corp provides an amphibious rapid response force in the event of a small-scale crisis abroad. The Army invades and occupies countries. Admittedly, this is a brief description of each service’s primary activity, but it highlights the distinctly different role each plays in the broader defense of American interests.

This offers an opportunity to segue into Farley’s second critique; strategic bombing did not achieve the promises of Giulio Douhet and Billy Mitchell, therefore get rid of the Air Force. Such a critique is logically absurd because it sets a standard for the Air Force that is does not require of the Army or Navy. If the same standard of success were required of the other services, they too should be on the chopping block.

After more than a decade of Army-led operations in Afghanistan (2001-present) and Iraq (2003-2010), we have not achieved the desired end-state, therefore get rid of the Army. Somali pirates continue to attack merchant ships in the Indian Ocean, therefore get rid of the Navy. After all, John C. McManus and other land power advocates argue that wars are won on the ground, yet the Army cannot beat the Taliban. Alfred Thayer Mahan wrote about the war winning importance of seapower, yet the Navy’s multi-billion dollar ships cannot stop the scourge of gun-toting illiterate Somalis in fishing boats.

If Farley’s concern for efficiency and limiting inter-service rivalry is to be taken seriously, why has he failed to demand that the Navy eliminate its army (the Marine Corps), which also has its own air force? In reality, Farley is not looking to advance a consistent standard by which all services should be judged. He simply dislikes the Air Force.

In truth, each service attempts to field a distinct set of capabilities that contribute to the nation’s security in ways that are not duplicated by the other services. Strategic bombing in World War II did not always achieve its desired effect, but neither have ground or sea operations lived up to the claims of their greatest proponents. If military history offers us one lesson, it is that such is the nature of conflict. What matters most is that the Army, Air Force, Navy, and Marine Corps offer the nation a full spectrum of capabilities that cover any threat that arises.

Farley’s final critique harkens back to an understanding of airpower that predates World War II; the purpose of airpower is to defend land and naval forces, therefore get rid of the Air Force. Here, his fundamental misunderstanding of how airpower is most effectively employed is glaring. In advocating the use of airpower in “penny packets,” where airpower is distributed to ground commanders, the advantages of “centralized control and decentralized execution” are lost. In other words, the range and speed of airpower give it the ability to transit geography in a way that land forces struggle to understand. Where a ground commander has a mental image of the battlefield from his vantage point, the airman looks at the battlefield 10,000, 20,000, or 30,000 feet below and sees something very different.

It should come as no surprise that the Army employs its aviation assets very differently from the Air Force. It should also come as no surprise that Army-air doctrine’s lack of concern for the efficient use of air assets has created a need for significantly more air assets in Afghanistan to achieve the same objectives—defense of ground forces—as when close air support is provided by the Air Force. This is but one recent example of what happens when the Army takes to the air.