Thinking About the Littoral Combat Ship 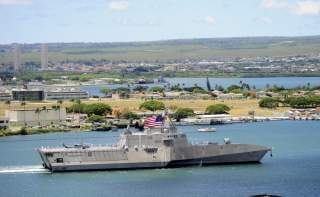 The U.S. Navy’s new Littoral Combat Ship (LCS) is hotly debated. Proponents say it’s a vital building block of the future Navy. Opponents say it’s overpriced and overestimated. Tens of billions of dollars and the future of American sea-power are at stake.

In reality, it’s too early to tell. The LCS is a great idea, but not all great ideas fulfill their promise. Some littoral combatant may be just what the navy needs. That doesn't mean the specific ship classes now plying the wine-dark sea are the answer. (Despite the common nomenclature, LCS is an umbrella term for two radically different designs.) Maybe they are, maybe they aren't. The vessels must now deliver on the extravagant promises made for them. Neither backers nor detractors of the LCS, nor fencesitters like yours truly, can prophesy confidently about the outcome.

This is a question of enormous moment because the navy intends to procure fifty-two of the revolutionary new craft. LCSs will ultimately comprise roughly one-third of the surface fleet. Call me a tinkerer, but ordering or planning that many hulls before experience has vindicated the underlying concepts exceeds my risk threshold. It's rather like Toyota ordering a concept car into mass production before road testing or refining it. The incremental approach is safer. A leisurely, rigorous period of fleet experimentation—building a few units, taking them to sea to see what works and what doesn't, retaining the best while discarding the worst—would reduce risk while improving the final product. Then the LCS could go into mass production.

Revolutions seldom yield neat results or unfold as the revolutionaries intend. Neither sea-power theory nor operational performance furnishes much insight into the Littoral Combat Ship's prospects. Hence the imperative to experiment.

Let's survey the reasons this debate swelters in heat yet sheds little light. The LCS is part of the U.S. Navy's "transformation" agenda. The notion that navies need small combatants, however, is neither new nor radical. It comes from brute geographic facts. Chief among these: the sea is big. Technological advances notwithstanding, the reach of warships' sensors and weaponry remains limited relative to the operating medium.

And ships are expensive. No navy can afford enough top-end combatants to police the empty vastness of the maritime commons. Nor does it need to. Lesser vessels suffice for "permissive" settings where dangers are minimal. Consequently, a fleet is a high/low composite, composed of "capital ships" meant to face down or vanquish rival fleets, and lesser ships that perform routine missions once the battle force has wrested command of the sea from an antagonist.

To keep ruling the waves, therefore, the U.S. Navy needs combatants that are less expensive and more plentiful than its billion-dollar-plus Aegis cruisers and destroyers. Guided-missile frigates (FFGs) have long filled this role. From the late Cold War on, FFGs have performed constabulary duty, undertaken lower-end combat missions, and acted as pickets, shielding task forces of various stripes from aerial, surface, or undersea assault. But these workhorses are being put out to pasture as their service lives wind down. So are the navy's flotillas of minesweepers (MCMs) and coastal patrol craft (PCs). Replacing multiple warships with a single ship type is an ingenious concept—provided the concept works.

The navy's plug-and-play concept is also sound. That means designing vessels like the LCS to allow speedy installation of new sensors, fire-control systems, or weaponry. The conceit behind the LCS is that it can execute multiple missions, one at a time. The "seaframe," or basic platform, will sport "mission modules" equipping it to clear sea mines, hunt submarines, or duel surface craft. Its function thus depends on which module commanders order installed for a given theater or operational surroundings.

Plug-and-play also permits quick upgrades when engineers field golly-gee new hardware. That's what Admiral Jonathan Greenert, America's top uniformed naval officer, calls a "payloads, not platforms" shipbuilding philosophy. A ship that readily accepts modular systems is like a computer with lots of USB ports. You simply unplug old gear and replace it with new. That spares shipwrights the time, expense, and hassle of tearing apart hulls to remove systems that were built into the ship's structure and thus are tough to extricate. In naval architecture as in medicine, major surgery is a delicate affair, to be avoided whenever possible.

The idea of littoral combatants, then, is rock-solid. Small ships have a place in modern fleets, just as they did during the age of sail. So why all the sniping at the LCS? Part of the reason is that a previous era of transformation impoverished naval specialists' vocabulary for debating ship types and capabilities.

Writing a century ago, British sea-power theorist Sir Julian Corbett explained how naval functions fit together. There was the battle fleet, the capital ships meant for duking it out with enemy navies. Once the battle fleet emerged triumphant, assuring unfettered use of the seaways, the "cruisers" and the "flotilla" took over. Cruisers were smaller, lightly armed combatants that dispersed to handle lesser menaces to navigation. They policed important waters. The flotilla was the hodgepodge of small craft, some armed, some not, that carried out workaday tasks such as maritime surveillance and law enforcement.

This more egalitarian dispersal of combat power, lamented Corbett, added up to a "revolution beyond all previous experience" that rendered history suspect if not moot as a source of guidance. His revolution never passed. If anything, it intensified with the advent of guided missiles and electronic warfare, high-impact armaments that can be fitted in small hulls. The long arm of small ships has grown long indeed.

Surface Warfare . . . Against Whom?

Most or the confusion over the LCS's purposes appears to center on surface warfare. Advocates generally portray the LCS as a minesweeper, an antisubmarine platform, or a surface-warfare vessel meant for scrapping with swarms of speedboats and other patrol craft in congested near-shore waters. This is unexceptionable. The U.S. Navy operates off foreign shores. Its expeditionary fleets need specialized ships to clear away such threats. At other times, however, proponents have advertised the LCS as executing all of these missions plus replacing the FFG—a multimission ship capable of serving in the battle force as well as discharging cruiser and flotilla duties—in the naval inventory.

That's where they risk overselling the new combatant. Boosters imply, perhaps unwittingly, that the LCS can serve as part of the battle fleet. For instance, an information paper published by Navy Office of Legislative Affairs last year proclaims that "LCS will provide the capabilities and conduct the missions performed by the FFG, MCM and PC type ships," and that the ship and its mission packages "will provide equal or greater capability than the legacy platforms whose missions it as assuming.” In turn that implies that the LCS could battle enemy frigates, cruisers, and destroyers, not just speedboats and small craft that infest littoral zones. Such claims mislead. The LCS's surface-warfare armament features only a light main gun, two smaller-caliber guns, a laughably short-range antiship missile, and an armed helicopter. This is no frigate.

It seems the conceptual imprecision that Sir Julian bemoaned in 1911 muddles debates to this day. Affirming, clearly and repeatedly, that no one will throw the LCS into combat against heavy Chinese men-of-war would help dispel the rancor over the ship's battle capacity. In fact it will act more as a skirmisher, clearing submarines, mines, and small craft out of the fleet's path. If it's meant to smite Iranian small craft or suppress Somali pirates, that should be the party line—full stop. A little precise language goes a long way.

Getting the Main Battery to Work

Last but not least, the material dimension helps account for the controversy engulfing the LCS. In effect the navy has constructed hulls for which the armament remains under development. The mission modules are due to enter service by 2016, but the fact remains that these remain untried systems reliant on offboard sensors and weaponry. It's rather like building a battleship circa 1900 without knowing for sure whether the big guns will fire as designed or boast the hitting power their gunsmiths intended. Questions linger.

Sure, chances are engineers will perfect the weapon systems. Until proof comes in, though, a curious dynamic will prevail: the ship is more or less operational, with one unit already on foreign station in Singapore, while its combat effectiveness remains hypothetical. The debate between advocates and detractors appears destined to smolder on.

James Holmes is professor of strategy at the Naval War College and coauthor of Red Star over the Pacific: China's Rise and the Challenge to U.S. Maritime Strategy (forthcoming in paperback, summer 2013). The views voiced here are his alone.