Top 5 Battleships of All Time 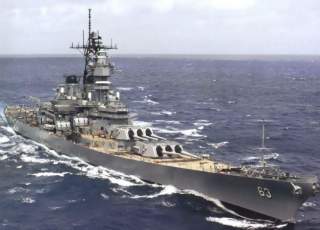 Bismarck. The German Navy's Bismarck lived a short life that supplies the stuff of literature to this day. Widely considered the most capable battleship in the Atlantic during World War II, Bismarck sank the battlecruiser HMS Hood, pride of the Royal Navy, with a single round from her main battery. On the other hand, the leadership's martial spirit proved brittle when the going got tough. In fact, it shattered at the first sharp rap. As commanders' resolve went, so went the crew's.

Yamato. As noted at the outset, Yamato was an imposing craft by any standard. She displaced more than any battleship in history, as much as an early supercarrier, and bore the heaviest armament. Her mammoth 18-inch guns could sling 3,200-lb. projectiles some 25 nautical miles. Armor was over two feet thick in places. Among the three attributes of warship design, then, Yamato's designers clearly prized offensive and defensive strength over speed. The dreadnought could steam at 27 knots, not bad for a vessel of her proportions. But that was markedly slower than the 33 knots attainable by U.S. fast battleships.

Missouri. Iowa and New Jersey were the first of the Iowa class and compiled the most enviable fighting records in the class, mostly in the Pacific War. Missouri was no slouch as a warrior, but -- alone on this list -- she's celebrated mainly for diplomatic achievements rather than feats of arms. General MacArthur accepted Japan's surrender on her weatherdecks in Tokyo Bay, leaving behind some of the most enduring images from 20th-century warfare. Missouri has been a metaphor for how to terminate big, open-ended conflicts ever since. For instance, President Bush the Elder invoked the surrender in his memoir. Missouri supplied a measuring stick for how Desert Storm might unfold. (And as it happens, a modernized Missouri was in Desert Storm.)