We're Losing Our Military Edge Over China. Here's How to Get It Back. 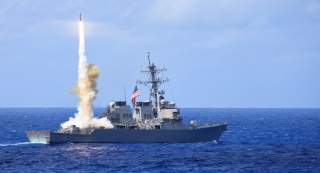 - Extend the range and capabilities of the Carrier Air Wing (CVW): Carriers have long been the centerpiece of U.S. power projection, yet advances in China’s A2/AD capabilities will force them to operate either from farther afield or at greater and possibly unacceptable risk. Since carriers will continue to be crucial to our ability to strike at the time and place of our choosing for the foreseeable future, their air wings must be adapted to the more contested environments created by China’s development of its A2/AD assets. Integrating a modernized combination of manned and unmanned aircraft able to operate in contested airspace into the air wing is a critical part of this effort. The future air wing’s manned and unmanned aircraft must provide capabilities for extended-range operations, persistence, stealth, payload, and electronic warfare; the carrier air wing must also be able to operate at both the high and low ends of the threat spectrum. While the Navy is well along in proving the feasibility of a carrier-based unmanned combat air system, to be effective in emerging threat environments in the Western Pacific and other regions, such a system should have broadband, all-aspect stealth, be capable of automated aerial refueling, and have integrated surveillance and strike functionality. In contrast, developing a new carrier-based unmanned aircraft that is primarily another flying sensor would be a missed opportunity with profound consequences for the practical utility of the carrier and thus for the nation.

- Keep the Long-Range Bomber on track: The ability to strike deep into adversary territory has been and will be critical to America’s military posture. Crucial to this ability are aircraft that can penetrate even the most heavily defended airspace and deliver meaningful strike packages against an adversary’s most valued assets. The problem is that the bombers currently in the U.S. air fleet are rapidly aging, with many now considerably older than the crews who man them. While the twenty B-2s in our inventory will continue to make vital contributions to the Air Force's long-range strike mission in contested environments, there is clearly a need for new aircraft with the capabilities to operate in the more dangerous air defense environment being formed by the systems that U.S. competitors are and will be deploying. Accordingly, the Air Force is developing the Long Range Strike-Bomber (or LRS-B). This aircraft is intended to serve as the service’s principal conventional and nuclear-capable bomber for the remainder of the century and is expected to fulfill the Air Force's need for a long-range strike aircraft with the speed, stealth, range and payload capacity needed to operate in nonpermissive environments. This aircraft and its set of associated capabilities are absolutely essential for a meaningful U.S. defense posture in a more contested Western Pacific. For this reason, the long-range bomber program must be kept on track. It is therefore vital that the Air Force manage the program so that costs can be kept reasonable and that the Congress provide consistent and full support for this crucial program so that a full complement of such bombers can ultimately be fielded.

- Preserve access to the space domain: The United States relies fundamentally on access to and the use of assets in space, especially in its power projection missions. The United States must therefore preserve the ability to use space while also mitigating its reliance on vulnerable assets. In the decade ahead, the United States will need to enhance the resiliency, affordability, command and control, and diversity (commercial and international) of its space architecture while developing a host of credible kinetic and nonkinetic means to deter potential adversaries from extending a conflict into space.

- Procure the right munitions: We will need to invest in a new generation of offensive munitions that can keep pace with the demands of the maturing guided-munitions regime. Both the quality and quantity of our munitions deserve attention, especially during periods of pressure on the defense budget, when weapons procurement and development unwisely become DOD bill payers for other higher priority, programmatic priorities. One munitions class of particular importance is the development of a new anti-surface weapon. Today, we are technically “out-sticked” by Chinese anti-ship cruise missiles (ASCMs). The Navy’s own ASCM, the Harpoon, was designed in the 1970s and no longer has the range or survivability to operate against the kind of more sophisticated surface threats now being developed by the Chinese PLA Navy. In short, we must retain sufficient munition capacities across the force in the years ahead while considering the range of options for the development of a new Offensive Anti-Surface Weapon (OASuW) and a Next-Generation Land Attack Weapon (NGLAW).

- Invest in cutting-edge and next-generation technologies: For decades, we have maintained our military edge in large part through relying on the effective exploitation of technology. This must be as true going forward as it has been in the past. The United States will therefore need to continue investing in new technologies that will help us keep our advantage in “game-changing” capabilities. This is not simply a “should do,” but rather a must-do, especially given the potentially radical changes in the military regime warfighting environment in which U.S. forces will need to operate in the coming decades. Thus, even though in today’s budget environment slashing future innovation has become a tempting area from which to cut, defense research and development must be protected and, where appropriate, expanded. These R&D dollars are critical to advances in key areas of future competition such as robotics, directed-energy weapons, next-generation radar, electromagnetics and hypersonics.

The United States is facing a geopolitical reality to which we have become unaccustomed over the last generation: the growing presence of another great power with a military that can challenge us at the higher levels of conflict. We have lived without such a competitors for almost thirty years, leading many to be lulled into the complacent sense that holding the military upper hand in such a relationship is not so important, that a favorable stability can emerge organically or through a “win-win approach” to international politics. Certainly we can hope for that, but China’s assertive behavior in the East and South China Seas suggests such an assumption would be imprudent at least and foolhardy at worst. Indeed, such an assumption seems particularly unwise when one recalls that this behavior has transpired when China is still considerably weaker than the United States. Consider, then, what might happen once the PRC is stronger. One need not ascribe to China any motives not usually imputed to rising great powers to see this as a cause for serious concern.

China is now standing up and seeking to take a place among the world’s most powerful nations. There are continued avenues for cooperation between our nations. However, we remain seriously concerned by significant trends in its international behavior, and we are deeply worried that the temptation towards considerably less palatable behavior will be much greater if China were able to gain the military upper hand in the twenty-first century’s most dynamic region. It is to prevent this prospect from coming to pass that we recommend this ambitious but focused and reasonable defense modernization program.

Representative J. Randy Forbes (R-VA) is Chairman of the Seapower and Projection Forces Subcommittee of the House Armed Services Committee. Elbridge Colby is the Robert M. Gates Fellow at the Center for a New American Security.