What Would Winston Churchill Do? 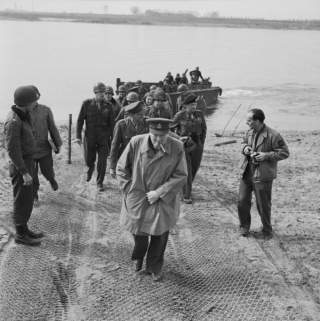 Russia's naked grab of Crimea, its continuing intimidation of Kiev and Putin's proffered justification—that he is merely protecting ethnic Russians—parallel a much darker time in European history. Former Secretary of State Hillary Clinton made this point last month: "Now if this sounds familiar, it's what Hitler did back in the '30s. All the Germans that were ... the ethnic Germans, the Germans by ancestry who were in places like Czechoslovakia and Romania and other places, Hitler kept saying they're not being treated right. I must go and protect my people, and that's what's gotten everybody so nervous."

In the Pacific, China has not undertaken military action as dramatic as the Russian invasion of Crimea but it has staked a claim to almost the entirety of the South China Sea with its "nine-dash line." In the process, China's Navy and Coast Guard has expelled the Philippines from the Scarborough Shoal, a reef just under 150 miles from the Philippines but almost 550 miles from Hainan Island, the nearest Chinese port. Responding to U.S. and regional concerns raised about China's position on the South China Sea, Foreign Minister Yang Jiechi proclaimed in July 2010, “China is a big country and other countries are small countries, and that’s just a fact."

China is also actively contesting long-time Japanese administration of the Senkaku Islands in the East China Sea and it unilaterally imposed an Air Defense Identification Zone covering waters and islands administered by both Japan and South Korea. It is widely reported that the West's lack of response to Russia's Crimean adventure has spooked America's Pacific allies, particularly Japan, which believe the lesson China has drawn from the situation is that a military resolution of its territorial claims would be likewise countenanced by the West.

While regional powers have unsuccessfully sought to conquer their neighbors in recent decades—most notably Argentina's invasion and occupation of the Falklands in 1982 and Iraq's invasion and occupation of Kuwait in 1991—the major powers have eschewed such conduct since China's 1951 annexation of Tibet. Given events in Ukraine and the Pacific, that long period of relative stability appears to be at an end, notwithstanding President Obama's comment following Russia's invasion of Crimea, "because you’re bigger and stronger taking a piece of the country—that is not how international law and international norms are observed in the 21st century.“

To the contrary, Putin's and China's actions declare, the new “international norms” look alarmingly like those of eight decades ago.

The authoritarian powers, Russia and China, have the initiative and are on the move. They are, in turn, watched by a regional provocateur, Iran, which has its own visions of Middle Eastern hegemony. The Western European democracies and Japan, after years of slashing defense budgets, are ill prepared to face these challenges. America under the Obama administration joined the disarmament club through sequestration. Even in the face of the Russia's invasion of Crimea, the administration plans to mothball half of the Navy's robust cruiser fleet, and Secretary Hagel has talked of doing something similar to the carrier fleet, while at the same time cutting many thousands of troops from the Army and Marines, respectively. Pollsters claim U.S. voters are exhausted by the wars in Iraq and Afghanistan and show little interest in foreign conflicts. Following, rather than leading, public opinion, Western leaders are wary of intervening in any substantial manner on behalf of small, far-away nations such as Ukraine or the Philippines.

Given the echoes of the 1930s being heard today, it is useful to review the events of 1938. Austria was annexed into the German Third Reich on March 12, 1938. The annexation took place the day after agitation by the Austrian Nazi Party and German demands—swiftly followed by German invasion—ousted the legitimate government in Vienna. A referendum on the union between Austria and Germany—scheduled for the next day—was cancelled. A month later, the Germans held their own referendum; under the watchful eyes of the Wehrmacht and without ballot secrecy, Austrians voted for union. The Anschluss took place a few months before the twentieth anniversary of the German surrender in World War I and violated Germany's post-war treaty obligations. Interestingly, Russia's annexation of Crimea took place just twenty-three years after the dissolution of the Soviet Union, an event Putin has labeled the "greatest geopolitical catastrophe of the century."

Two weeks following the Anschluss, Winston Churchill strode into the British House of Commons and stated: "[A] country like ours, possessed of immense territory and wealth, whose defences have been neglected, cannot avoid war by dilating upon its horrors, or even by a continuous display of pacific qualities, or by ignoring the fate of the victims of aggression elsewhere. War will be avoided, in present circumstances, only by the accumulation of deterrents against the aggressor."

I have watched this famous island descending incontinently, fecklessly the stairway which leads to a dark gulf... If mortal catastrophe should overtake the British nation and the British Empire, historians a thousand years hence will still be baffled by the mystery of our affairs. They will never understand how it was that a victorious nation, with everything in hand, suffered themselves to be brought low and to cast away all that they had gained by measureless sacrifice and absolute victory—'gone with the wind.'

A quarter century after the end of the Cold War, similar words could certainly be used to describe America's present circumstances—but there is no Commons debating such matters and there is no Churchill thundering warnings of what lay ahead. Back in 1938, the pace of events quickened, and by the end of September the great powers were agreeing to strip Czechoslovakia's strategic industrial and banking regions from the country without its consent, awarding the so-called Sudetenland to the Third Reich in a further effort to slake Hitler's thirst for conquest and avoid a Europe-wide war.

While the majority of Britons supported Prime Minister Neville Chamberlain's appeasement of Hitler as an act of statesmanship in the pursuit of peace, Churchill, back in the Commons on October 5, laid out the truth of the matter: "[a]ll is over. Silent, mournful, abandoned, broken, Czechoslovakia recedes into the darkness. She has suffered in every respect by her association with the Western democracies and with the League of Nations, of which she has always been an obedient servant."

Churchill acknowledged the popularity of Chamberlain's appeasement but correctly labeled it a defeat:

I do not grudge our loyal, brave people, who were ready to do their duty no matter what the cost, who never flinched under the strain of last week—I do not grudge them the natural, spontaneous outburst of joy and relief when they learned that the hard ordeal would no longer be required of them at the moment; but they should know the truth. They should know that there has been gross neglect and deficiency in our defenses; they should know that we have sustained a defeat without a war, the consequences of which will travel far with us along our road...

Churchill then prophetically warned his countrymen and his audience across the Atlantic of the consequences of the appeasement policy: "Do not suppose that this is the end. This is only the beginning of the reckoning. This is only the first sip, the first foretaste of a bitter cup which will be proffered to us year by year unless by a supreme recovery of moral health and martial vigor, we arise again and take our stand for freedom as in the olden time."

After a decade of disarmament followed by appeasement, Hitler invaded Poland in September 1939—swiftly followed by Stalin, who sought to secure his share of the spoils. Fortunately, the United Kingdom and its allies were able to turn to the man who had foretold of the calamity and who possessed the courage and fortitude to hold the forces of darkness at bay during that perilous time while what remained of the Free World frantically rearmed to meet the challenge. Having given the warning for so many years, Churchill alone had the credibility to rally the British people and eventually the English-speaking peoples.

It is the sincere hope of all men and women of good will that the recent events in Europe and the Pacific are not, in fact, the first sip of another bitter cup, and that the authoritarian regimes will retreat from the use of force or even the threat thereof against their neighbors whether it be for territorial conquest or to exert influence over them. There are too many Western leaders willing to play Chamberlain's role today. Governor Mitt Romney's Churchilll-like warning of a resurgent Russia made during the last campaign was mocked by the President and elites, and was rejected by a narrow margin at the polls. Perhaps because of that example, very few elected officials have been willing to speak bluntly about this gathering storm. Romney from the sidelines continues to do so, and Senator Marco Rubio and Ambassador John Bolton have auditioned speeches with the unpopular message that vigor and hard choices are required of us if we are to arise and take our stand for freedom. The media elites refuse to face the realities of the world, however, and it will take sustained, disciplined rhetoric from credible voices to wake the West, the world, and even peaceful elements within the authoritarian regimes, especially commercially savvy and modern China, to the dangers of this old new era.