Why the Saudis Are Panicking 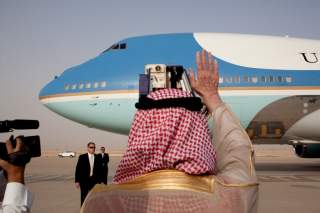 As President Barack Obama must have noticed during his visit, there is a panicky tone to almost everything the Kingdom of Saudi Arabia does these days, whether it’s campaigning for two years to win a coveted seat on the UN Security Council only to give it up immediately after the vote, or its public pronouncements of going it alone in the chaos of Syria, or its break with its fellow Arab state Qatar, or the closing of the Al Jazeera office in Riyadh, or the banning of the books of renowned Palestinian poet Mahmud Darwish. Or, of course, its opposition to diplomacy over Iran’s nuclear program and the prospects of a US-Iranian thaw.

Riyadh’s opposition to the Iran nuclear talks has largely been understood in the context of the larger Saudi-Iranian and Sunni-Shia rivalry. Consequently, Saudi’s negative reaction was predictable, the argument goes. The Saudi royal house would undoubtedly not sit idly by as its regional rival negotiated its way out of harsh sanctions and into a potential US-Iranian rapprochement that could pave the way for an American tilt towards Tehran—all at the expense of Saudi interests.

But the intensity of Riyadh’s reaction cannot be explained solely through the kingdom’s displeasure at Tehran’s diplomatic advances. In fact, the unprecedented opening between the US and Iran is arguably only the tip of the iceberg of Saudi Arabia's growing list of concerns. Numerous geopolitical trends in the last decade have evolved in opposition to Saudi interests. Much indicates that it is the combination of these factors, rather than just Saudi displeasure with US-Iranian diplomacy, that best explain the erratic behavior of the House of Saud.

Consider the following developments. First, the United States has significantly increased its own oil production and reduced its dependence on Saudi oil. Driven by a boom in shale oil production, America's crude output has surged at record speeds in recent years. Last year, production rose a stunning 15 percent—the fastest absolute annual growth in any country in twenty years. According to the International Energy Agency, the United States will overtake Saudi Arabia as the world’s top oil producer as early as 2015.

The official Saudi line reads that OPEC had survived past increases in production from countries outside OPEC, and that Saudi does not worry about the America’s growing output. But some important voices in Saudi Arabia publicly disagree, charactering the US’s declining dependence on Saudi crude as “an inevitable threat."

Indeed, being a dominant producer on the oil market has provided the kingdom with vital political influence. The US’s growing output is a direct strategic threat to that influence, according to some in Saudi.

Secondly, the Arab uprisings—and the Obama administration’s reaction to those—have further added distance between Riyadh and Washington. Saudi Arabia was vehemently against the anti-Mubarak rallies in Egypt and viewed Obama’s shift to the side of the Tahrir square protesters as a betrayal. For decades, an understanding reigned supreme between the United States and its regional Arab allies: The Arab autocracies would help ensure stability in the region and on the oil market, and in return the US would protect the states and as well as their regimes.

But since the Arab Spring, a common view in the Middle East—not just in Saudi—is that the US has betrayed this arrangement and abandoned its allies. From the US perspective, however, the Obama administration simply saw the writing on the wall: Most Arab autocracies were quickly reaching their expiration dates and the demands of the populations for greater governance, freedom and rights were both justified and unstoppable.

The new reality is that in spite of Riyadh’s massive arms purchase from the US, Washington will likely not come to its aid if the Arab spring reaches Saudi. This means that a critical avenue for Saudi Arabia to ensure regime survival is in jeopardy—at best—or, at worst, lost.

Thirdly, to make matters worse, a succession crisis looms in the Kingdom. A successor and a third in line for the throne have been appointed, but their reigns are not likely to be long due to their old age. In the next few years, the throne is likely to pass to the third generation of descendants of the kingdom’s founder Abdulaziz ibn Saud. Even under the best circumstances, such a generational shift can carry complications. In these sensitive geopolitical times, the House of Saud cannot afford a protracted succession crisis while also facing the pressure of the Arab spring, Sunni-Shia tensions in its Eastern province—and the uncertainty of American protection.

Which brings us to the fourth factor: America’s pivot to the east. Whether it is progressing at the pace originally intended or not, the reality is that the Obama administration has decided to reduce America’s military footprint in the Middle East and avoid getting dragged into any additional ground wars there. In the eyes of some in Riyadh (and Tel Aviv), the Obama administration has relinquished its responsibility to uphold order in the region and abandoned its allies to meet their fates alone.

From Washington’s perspective, the real strategic challenge to the US will come in Asia, not the Middle East. Further military entanglement in the Arab world will only undermine the US’s ability to handle future crises in East Asia.

On top of all of this, US-Iranian diplomacy may lead to the unchaining of Iran. Tehran might break out of its isolation, be rehabilitated into the region’s political and economic structures, which in turn can enable it to legitimize its geopolitical gains in the region. A new regional order may emerge, one in which Washington will quietly accept Iran’s advances.

Had US-Iranian diplomacy made headway under former Iranian president Mohammad Khatami—at a time when Saudi-Iranian relations were warming—Riyadh would likely still have been hesitant and anxious. It would have cautiously welcomed the thaw, while remaining concerned about how US-Iranian rapprochement would affect its interest. But there would not have been any of the current overreactions. The Saudi panic is more likely rooted in its fears about the broader geopolitical trends in the region, of which US-Iranian rapprochement is one of many concerning trends to Riyadh.

Ultimately, finding a new regional equilibrium that enjoys Saudi buy-in is critical. Saudi Arabia is an important state in the region for both economic and religious reasons. Just as the containment of Iran has become a source of instability in the region, any move that would push Saudi towards greater extremism would ill serve the region. Just like Iran, Saudi Arabia must be part of the solution. In particular, Riyadh has the ability and the responsibility to defuse sectarian strife.

Panic, however, will bring Saudi Arabia no closer to such objectives.

Trita Parsi is founder and president of the National Iranian American Council. He tweets at @tparsi.