Will the F-35 Dominate the Skies? 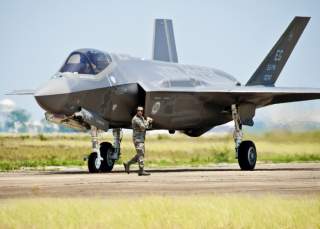 What are we to make of the F-35 Lightning II Joint Strike Fighter (JSF)? Over the past several months, several pieces of good news about the program have emerged. The Royal Netherlands Air Force just became the second partner organization to operate the F-35. While new reports note a deal is not finalized, a South Korean purchase of the plane looks likely and with Japan already committed the plane looks set to soar in Asian skies. Indeed, while several partners have reduced their commitment over the last year, none have backed out fully. The F-35 Lightning II will, eventually, fly in the service of around a dozen major allied air forces.

The classic death spiral describes a process in which rising costs cause political and military authorities to cancel part of an aircraft purchase. As the total numbers drop, the price-per-unit appears to increase, as research, development, and startup costs are included in the numerator. The apparent increase in price then produces a political firestorm, producing more cancellations, further cost increases, a reduced fleet, and difficulties with international partners.

But the problem in this case is that the death spiral won’t lead to the actual death of the F-35. The fighter has, effectively, become unkillable. In the wake of negative experiences with the B-2 Spirit, the F-22 Raptor, and several other programs, Lockheed Martin and the Pentagon worked very hard to ensure that no one could kill the F-35. Three US services committed to acquiring substantial numbers of Joint Strike Fighters, with only minimal hedging with respect to alternatives. International partners bought in, often at considerable political cost. The result is an aircraft that perhaps should undergo a “death spiral,” but cannot; no matter how expensive the cheap alternative to the F-22 becomes, it cannot be killed. It is what it is, and we’re stuck with it.

That stark reality aside, what would a wiser policy with respect to the JSF have looked like? The hope that the plethora of existing warplanes could be economically replaced by a single airframe was deeply misplaced; the operational costs of new F-35s will exceed that of older aircraft for quite some time. The F-15, F-16, F/A-18, and A-10 remain more than capable of accomplishing most missions that the F-35 will conduct. Indeed, for many of the missions associated with the modern practice of airpower, A-1 Skyraiders and F-4 Phantom would perform perfectly well. The best hedge against failure of the F-35 program would have been investment in modernized versions of legacy aircraft, which could perform the traditional missions that do not require the specialized capabilities of the F-22 or F-35. Sadly, the attractiveness of this option to Congressional budget hawks meant that the Pentagon had to close the door on it as tightly as possible.

The F-35 is designed to excel in contexts that emphasize Beyond Visual Range (BVR) aerial combat in a highly networked, information-intensive environment. The capabilities of the aircraft are truly remarkable, if they work as promised and if the Lightning II is purchased in sufficient numbers to take advantage of its cooperative nature. Critics of the F-35 point out that it comes up short on many basic “fighter” characteristics, but if it works properly it doesn’t need those traits. However, at this point it is not obvious that the F-35 will ever operate in the role that its designers have intended.

Historically, fighter aircraft are often pressed into roles other than what they were designed for. This is especially true of fighters developed in peacetime. Designers and political decision-makers only rarely manage to make the right guess with respect to what the next war will look like, or what the next fighter will need. The P-40 Warhawk, which became one of the finest attack aircraft of World War II, was initially designed as an air superiority fighter. The P-51 achieved its greatest success as an escort for daylight bomber raids over Europe, a mission which the Army Air Forces considered unnecessary when the Mustang first entered production. Conversely, the legendary Messerschmitt Me 262 Swallow was redesigned as a fighter-bomber before being shifted back -- very successfully-- into an interceptor role.

Similarly, most early American fighters during the Cold War were designed to hunt and kill Soviet bombers approaching the United States. In practice, they were forced into air superiority and fighter-bomber roles, with moderate success. The F-15 and F-16, also designed for air superiority, have more often acted in strike roles. Even the F-14 Tomcat was eventually re-equipped for strike. The Harrier was intended for a nuclear context, in which fixed runways would be destroyed by Soviet tactical warheads.

Moreover, the previous generation of fighter and attack aircraft, including the Eagle, Viper, and Warthog, emerged as the lessons of Vietnam were still fresh in memory (the legendary F-86 Sabre was designed under similar conditions). Pilots and designers approached the aircraft of the 1970s with an understanding of how the previous aircraft had failed, and of how critical improvements could be made. The F-35 has been developed under fundamentally dissimilar conditions; the F-15 and F-16 have not failed, but we are trying to envision how they might fail in the future, in order to solve problems that are necessarily conjectural.

The point is that the F-35 will likely be used under conditions that its developers do not currently envision. It is, if anything, a second-order peacetime aircraft, designed primarily around an imaginary -- if plausible -- vision of what future air combat might look like.

The F-35 will have a future. A different question is whether the type of warfare embodied in the F-35 will ever become central to U.S. strategic interests. High-intensity combat against a peer competitor opponent, or into the teeth of an advanced anti-access/area denial (A2/AD) system, may not occur within the lifetime of the airframe. But if the opportunity comes to demonstrate the F-35’s quality, the result could very well be magnificent, or magnificently disastrous. Similarly, the F-35B has the potential to be a ‘game changer’ in its own right; the short take-off and vertical landing (STOVL) version of the Lightning II may give several countries the capability to operate a modern, supersonic fighter from small carriers. As the Falklands War demonstrated, even Harriers could pose a significant problem for aggressor air forces seeking to strike deployed naval units.

Even if the F-35 faces problems, they will be in great part covered up by the other advantages that the United States military enjoys:

· Training: Although China’s People's Liberation Army Air Force (PLAAF) and other air forces have undoubtedly increased their ability to recruit and develop human capital, it is unlikely that any country will match the ability of the United States to recruit and train pilots. Great pilots can make up for inferior airframes.

· Reliable Equipment: America’s greatest contribution to military history is, in large part, its logistical genius. Complexity notwithstanding, the F-35 is likely to always have the weapons, spares, maintenance, and aircrew it needs to operate at its maximum effectiveness.

· The Joint Fight: Evaluating the independent contribution of the F-35 will be difficult, because it will always act as part of a team. The F-22, the Long-Range Strike Bomber, the USS Zumwalt (DDG-1000), and numerous other platforms will contribute to winning whatever fight the F-35 becomes engaged in.

· Choosing Our Fight: Finally, the United States enjoys the advantage of almost always being able to choose its fight. If the U.S. military and political leadership really doubt the capacity of the F-35 to win air superiority and strike in hostile conditions, it is unlikely that the F-35 will be asked to do so.

The F-35 Lightning II (or whatever more helpful name is eventually attached to it) will become, along with the Typhoon and the Rafale, the premier fighter fielded by the ‘West’ for the next fifty years. The battle against the F-35, at least in the domestic context, was lost before anyone beyond Lockheed Martin thought about fighting it. We’ll build it, and for better or worse we’ll have to live with it. This is a lesson that Congress and the Pentagon should take to heart when considering the Next-Generation Bomber, the Flight III Arleigh Burke destroyer, and a variety of other major procurement programs. In retrospect, the United States should have hedged by devoting more attention to the F-22 (a position that this author, to his discredit, opposed at the time) or to legacy platforms. But the future of air warfare is hard to predict, and the F-35 may yet do extraordinary things.