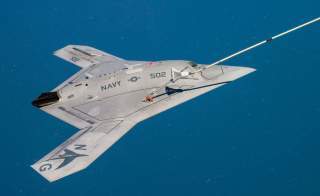 Like anyone who's ever worn a U.S. Navy uniform, I belted out a cheery huzzah! last week when the news broke: an X-47B unmanned aerial vehicle (UAV) had made history's first pilotless carrier landing by an aircraft of its type, aboard USS George H. W. Bush off Hampton Roads. Crewmen then catapulted the autonomous plane off the flattop's bow. It circled around, trapped again, and vaulted skyward again. Two subsequent landing attempts failed, owing apparently to minor technical glitches. No matter. The age of carrier-based drones is upon us.

Despite the hooplah—Chief of Naval Operations Jonathan Greenert pronounced the traps a "miraculous technological feat"—this marks the beginning of a journey, not its end. The X-47B is an Unmanned Combat Air System demonstrator, not a working aircraft ready for mass production and deployment.

Having proved that drones like it can launch and recover from carrier flight decks, the X-47B will take early retirement while the navy embarks on the arduous process of soliciting designs for its successor, an Unmanned Carrier Launched Airborne Surveillance and Strike (UCLASS) aircraft. Defense manufacturers will submit designs. Navy officialdom will weigh the merits, drawbacks and costs of each before picking one for full-scale production. That's a process that will consume years. A working UCLASS will take to the skies by 2019 if service leaders get their way.

History warrants skepticism about such forecasts. Reports of the demise of manned tactical aircraft are greatly exaggerated. Still, it's not too soon to peer through a glass darkly, in an effort to foresee how robotic aircraft may reshape carrier operations and, perhaps, alter the strategic landscape of theaters like the Western Pacific, the Indian Ocean and the Persian Gulf.

Drawing on the X-47B's exploits and the navy's wish list for a UCLASS design, we can glimpse what the first generation of carrier-based drones may look like. Let's define the warplane by what it won't, and will, be. For one thing, it won't be a one-for-one replacement for existing airframes. Maverick and Goose needn't lose sleep about their job security. Dogfighting is conspicuously absent from the UCLASS's portfolio. Fleet air defense will remain a job for Mav, Goose, and the carrier's retinue of picket ships into the indefinite future.

Nor will the UCLASS usurp the ground-attack mission—much. Navy requirements envision a long-range, light strike aircraft able to venture up to two thousand miles from the flattop while toting one thousand pounds of ordnance. That's about triple the unrefueled operating radius of the F/A-18 E/F Super Hornets that represent the mainstay of the air wing, or of the stealthy F-35 Lightning IIs that will join the fleet in the coming years. This long arm will let the carrier project power ashore while remaining safely out of reach of antiaccess weaponry.

Not bad. On the other hand, the UCLASS's one-thousand-pound bombload represents only a fraction of the Super Hornet's or Lightning II's. The F/A-18E/F, for instance, can haul up to 17,750 pounds of air-to-air and air-to-ground armaments, external fuel tanks, or sensor pods, depending on how it's configured. Rather, think of the UCLASS as an extended-range Tomahawk Land Attack Missile that can deliver its payload yet return home for reuse. It supplements existing strike capabilities without replacing them.

Much like current UAVs, then, the first-generation UCLASS will act mainly as the eyes of the fleet, using cameras and sophisticated sensors to help commanders compile an accurate picture of the tactical setting out to the distant periphery. Plans call for unmanned aircraft to orbit the fleet either 600 or 1,200 miles away, on the logic that forewarned about inbound threats is forearmed. In all likelihood the surveillance, detection, and targeting functions will comprise the aircraft's chief raison d'être, simply because its capability for pounding ground targets will remain so modest.

Size is one UCLASS characteristic that appears humdrum. Humdrum, but crucial. Popular lore depicts carriers as seagoing metropolises, but flight- and hangar-deck space is cramped on even the most massive flattop. The X-47B is a hefty aircraft, with roughly the same dimensions as a Super Hornet. Size thus could limit the numbers of UCLASSs in the carrier air wing. Bigger aircraft means fewer aircraft, which means slower sortie rates and fewer planes aloft. A large UCLASS, furthermore, might compel commanders to choose, in zero-sum fashion, between manned fighter/attack planes and unmanned aircraft. Substituting the latter for the former could extend the air wing's reach but dilute its aggregate fighting power. That's a painful trade-off.

So much for the hardware dimension. It's worth asking how unmanned aircraft may modify the American way of war at sea, and how prospective adversaries may react to this brave new world. The U.S. Navy thinks in tactically defensive terms. The question that's uppermost in any wartime commander's mind is: how do I protect the high-value unit (namely the carrier or amphibious assault ship at the task force's core)? Unmanned aviation will exert mixed influence on the answer to that question.

Embarking UCLASSs in carrier air wings, that is, could ease certain stresses while amplifying others. Eyes in the sky ahead of the task force and on its flanks will supply early notice should enemy surface, air or undersea threats transpire. Detection at long range grants defenders more time to react. The more defensive engagements the air wing and the carrier's escorts can essay, the greater their prospects for a successful intercept.

On the other hand, if the UCLASS contingent crowds fighter squadrons out of the air wing, the carrier could end up relying more heavily on the missile-armed cruisers and destroyers steaming in company to defend it. Is the surface navy ready to take up the slack? In short, it remains to be seen how UCLASS deployment will influence naval defense and offense. Tacticians should think ahead about the likely dynamics so that tactics are in place and ready to go—or at least ready for real-world experimentation—by the time unmanned warplanes join the fleet.

It's also worth asking how the changing configuration of carrier air wings may influence commanders' outlook on contested terrain, and how any shifts in mindset will affect interactions between the warring parties. Strategic mastermind Woody Allen declares that eighty percent of life is showing up. Will the availability of long-range, unmanned surveillance aircraft render naval commanders more risk-averse? It's conceivable commanders will find themselves tempted to linger outside enemy weapons range but within UCLASS range, in hopes of making the theater completely safe for carrier operations before closing the range to let manned strike aircraft do their work. If so, the opportunity costs of failing to show up to the fight promptly could prove steep. The U.S. Navy might surrender the first-mover advantage to a bold adversary—with potentially dire results. Woody would disapprove.

Lastly, it's worth considering whether the UCLASS (or, more likely, some more lethal successor) might be the U.S. Navy's HMS Dreadnought. In 1906 the Royal Navy launched the world's first all-big-gun, steam-turbine-driven battleship. The Dreadnought instantly outclassed all previous battlewagons, including Great Britain's own. In that sense it nullified the Royal Navy's numerical advantage in capital ships—resetting the scoreboard for Britain's naval arms race with Imperial Germany to 0-0. Berlin swiftly laid the keels for dreadnoughts of its own, and the race was on. Perversely, then, British ingenuity gave German shipwrights the chance to catch up in a contest that once appeared unwinnable.

Suppose unmanned combat aircraft represent a technological leap of Dreadnought proportions. If so, the United States may have just reset the scoreboard to 0-0, encouraging potential foes to construct autonomous warplanes of their own from a position of relative parity. That would help them even the airpower balance at sea, and in fairly short order. Leveling the playing field for America's rivals would be an unintended consequence of the first order.

James Holmes is Professor of Strategy at the U.S. Naval War College and coauthor of Red Star over the Pacific, just out in paperback. The views voiced here are his alone.