‘A Higher Price’: Putin Lays Out His Vision for a Multipolar World 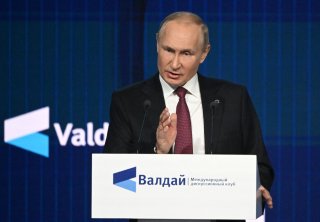 Russian president Vladimir Putin delivered remarks last week during a session of the Valdai Discussion Club’s annual foreign affairs forum. As with Putin’s prior appearances at major conferences within and outside of Russia, the event was at least partially intended to convey the sense that the West’s maximum-pressure campaign to isolate Russia has failed. Putin made this point during the three-hour-long question and answer session following his prepared remarks by fielding inquiries from foreigners and conveying the curated image of a leader and government engaged with the rest of the world. The discussion’s optics dovetailed with its content, centering on Putin’s vision for a “multipolar world” to supplant what he views as the Western-dominated international order that emerged after the Soviet Union’s collapse.

In contrast to many of Moscow’s leading intellectuals and policymakers, Putin has not and did not espouse a distinctly Eurasianist vision. He instead tried to chart a broader but less focused coalition, arguing that all non-Western cultures have a vested interest in resisting the West’s continued attempts to impose its “unconditional dominance” over the rest of the world. “I am convinced that the nations of the world will not shut their eyes to a policy of coercion that has discredited itself. Every time the West will have to pay a higher price for its attempts to preserve its hegemony. If I were a Western elite, I would seriously ponder this prospect,” he said.

Putin somewhat revised the uncompromising approach communicated in his September speech recognizing the annexation of four Ukrainian regions, where he all but laid out a program for existential confrontation between Russia and the West. “As an independent and distinctive civilization, Russia has never considered and does not consider itself an enemy of the West,” he said at Valdai. “Americophobia, Anglophobia, Francophobia, and Germanophobia are the same forms of racism as Russophobia or anti-Semitism, and, incidentally, xenophobia in all its guises.” The remarks underscored Putin’s contention that Russia is not locked in conflict with the West as such, but with a subset of Western elites and institutions bent on imposing their will not just on Russia but the entire non-Western world.

Putin insisted that Moscow’s quarrel is not with the subset of the West rooted in “traditional, primarily Christian values, freedom, patriotism, great culture and now Islamic values as well.” Instead, he argued that Russia is asserting its sovereignty against the “aggressive, cosmopolitan, and neocolonial” impulses of some Western elites. As if to reinforce his contention that there is a version of the West with which Russia can do business, Putin railed against the phenomenon of “cancel culture” using rhetoric that would not be unfamiliar to conservatives in the United States and Europe. “The so-called ‘cancel culture’ and in reality – as we said many times – the real cancellation of culture is eradicating everything that is alive and creative and stifles free thought in all areas, be it economics, politics or culture,” Putin said before condemning what he described as the “neoliberal” drive to suppress alternate points of view.

Putin’s distinction between “two Wests”—one that poses an existential threat to Russia and another that is at least partially complementary to Russia’s values—comes as an attempt to nuance his previous Manichean indictments of the West as a uniformly predatory civilization founded on “totalitarianism, despotism and apartheid.”

Whereas Putin’s September speech appeared to slam the door shut on substantive negotiations with the West, his Valdai remarks suggested that Moscow is open to dialogue with Western governments that are not driven by what he denounced as “neocolonialist” values. This messaging is consistent with the broader approach taken by the Kremlin since Russia’s invasion of Ukraine in February. Although relations have deteriorated between Moscow and the European Union (EU), the Kremlin has signaled its openness to maintain trade and political ties with individual European states willing to defy the Western maximum-pressure policy against Russia.

The Russian president’s shift in rhetoric comes amid fresh concerns by Western experts and officials that Moscow is laying the groundwork for a new phase of escalation in the Russo-Ukrainian War.

Putin reaffirmed his long-standing view that hostilities between Moscow and Kyiv are effectively a “civil war,” arguing that Russians and Ukrainians are “one people” tragically separated through centuries of geopolitical intrigue by Russia’s adversaries. But the Russian leader insisted that Ukraine is not and has never been the focal point of the current conflict, which he framed as a confrontation between Russia and NATO that was decades in the making. Putin blamed the war’s outbreak on “NATO’s expansion to Ukraine” and the lack of appetite among Ukraine’s “Western handlers” in pressuring Kyiv to implement the Minsk agreement. The Ukraine war, Putin suggested, is part of a global transition to a multipolar world in which the West will no longer be able to act as a hegemonic force.

Prominent Russian political analyst and moderator Fyodor Lukyanov asked Putin if he “underestimated” his opponents in Ukraine. “No,” said the Russian president, arguing that it is because of NATO’s heavy military involvement in Ukraine that Russia had to launch the “special military operation”—the Kremlin’s official parlance to describe the war in Ukraine.

Putin’s remarks, though hardly new in substance, accent the thinking that has consistently underpinned Moscow’s wartime policies: Russia is prosecuting a war in Ukraine against NATO, and the conflict can only be brought to end through broad strategic talks with NATO.

The Biden administration, which is keeping the Ukrainian war effort afloat with an unprecedented program of arms transfers and intelligence sharing, has not indulged Moscow’s subtle diplomatic overtures. White House officials have insisted that the impetus for any potential negotiations must come from Kyiv, which says it is pursuing a policy of total victory over Russia. The Zelenskyy administration issued a decree earlier this month forbidding peace talks with Moscow so long as Putin remains in power. Top Kyiv officials have condemned calls for negotiations by Western observers as immoral and offensive.

Putin, driven by a historicist conception of himself as an actor of change in the inevitable transition to a multipolar world, reaffirmed he intends to stay the course on Ukraine unless and until the West becomes amenable to Russia’s core security demands. Western governments and institutions have so far held firm to their policy of supporting Kyiv “as long as it takes” without making any efforts to cultivate a diplomatic track. “We cannot allow President Putin to win,” NATO secretary-general Jens Stoltenberg said earlier this week. “That would be a disaster, a tragedy for Ukrainians, but it would also make us, NATO Allies, more vulnerable.” With the battle lines drawn between Russia and the West, the stage is set for a grim winter.