‘America Is Back’: U.S., Israeli Right Plan Next Move 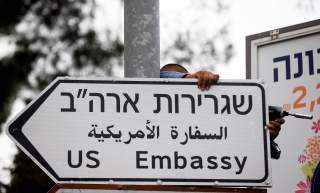 President Donald Trump’s moves to pull the United States from the Joint Comprehensive Plan of Action (JCPOA), otherwise known as the Iran deal, and shift the American embassy from Tel Aviv to Jerusalem have been met with widespread skepticism: from the elite in Trump’s own country, from traditional U.S. allies and from most of the West’s trained diplomats.

But he is not without steadfast supporters.

The embassy in Jerusalem will open next week.

“America is back,” cheered conservative organizers on a call Wednesday. Along with the president’s decision to leave the Iran deal, announced Tuesday, many in the president’s domestic political base—along with right-wing activists and intellectuals in Benjamin Netanyahu’s Israel—are not concerned, but rather, ebullient.

“The two countries are on the same page, with a sober understanding of the challenges ahead,” said David Weinberg, Vice President of the Jerusalem Institute for Strategic Studies, on a call organized by American political activist and CPAC (Conservative Political Action Conference) chief Matt Schlapp.

The organizers of the call—including Trump-favorite Congressman Ron DeSantis, running for governor in Florida—intimated that they were emboldened by the recent moves.

Qatar, a country that has faded from the hot seat since last summer, was explicitly called “an Islamic outpost,” and “the Iranian challenge” was spoken about in no uncertain terms.

Weinberg said that “Trump had laid away with obsolete paradigms such as the statement that: ‘The two state-solution is the only solution.’” Weinberg noted that he would be “one of the participants in the opening ceremony” next week.

The region is broken up into camps: there is the Iranian camp…. The Islamic State camp.... There’s the Muslim Brotherhood camp….But there is a fourth camp that stands against the other three that includes most of the Gulf States (except Qatar), led by Saudi Arabia… and it includes Israel.

At one point, Lerman floated that the United States should lead the effort to end NATO’s military arrangement with Qatar.

“Yesterday… was historic,” said DeSantis, who then quoted John Adams.

“The Hebrews have done more to civilize man than any other nation. I really wish for the Jews again in Judea as an independent nation,” DeSantis said, quoting Adams, noting that an Israeli project, or equivalent, has been “talked about since the beginning of the American experiment.”

Schlapp and Weinberg noted that a relative lack of violence in the Middle East in reaction to both the JCPOA and Jerusalem decisions should encourage further bold American action.

“I think there was a euphoria that a president would actually … implement a tough decision, that does have consequences,” said Schlapp.

The activists and supporters also hatched their next move. The president’s family, including Jared Kushner and Ivanka Trump, will be at the opening of the embassy next week, along with Treasury Secretary Steven Mnuchin and Mid East envoy Jason Greenblatt.

“Indeed, it will be a great day next week,” said Weinberg. Going forward: “The most important agenda item for Israel is strengthening Israel’s control over [greater Jerusalem]... and building in and around Jerusalem to ensure the city’s future.”

There are several strategic zones on the eastern edge of Jerusalem where Israel has planned to build 50,000 homes, and has planned this for decades, but successive American administrations have blocked this, using the argument that this territory is necessary for the “territorial contiguity of a future Palestinian state.”

Of particular importance, Weinberg said, is building in “a quadrant known as the ‘E-1 zone,’ which runs between Jerusalem and the Jordan Valley. “I… suspect Prime Minister Netanyahu will make a move to shore up Israel's eastern flank in that way. … And hopefully the Trump administration will provide support for that move.”