The ‘Silicon Shield’ Is a Danger to Taiwan and America 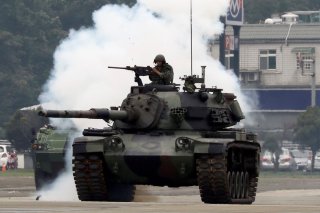 Efforts to erode Taiwan’s chip-making dominance should accompany the provision of arms for the island’s defense.

Taiwan’s “silicon shield”—the name for a strategy that entrusts the island’s defense to both Chinese and American reliance on its semiconductors—is an outmoded concept that burdens the United States, emboldens Taiwan, and fails to deter China. Its obsolescence risks being exposed in a crisis.

Since the outbreak of the Russo-Ukrainian War, American defense strategists have pressed Taiwan to upgrade its military defenses. One important task has been to tailor the provision of defensive weapons to the needs of Taiwan’s military—procuring Stingers and Javelins rather than Abrams tanks and Seahawk helicopters.

In this process, American strategists have overlooked one way to accelerate the “porcupining” of Taiwan—weakening Taiwan’s “silicon shield.”

The “silicon shield” is the moniker given to the protection presumed to be afforded by Taiwan’s semiconductor industry. The globe’s chip factory, Taiwan manufactures 90 percent of the world’s most advanced chips and 50 percent of all chips. Taiwan is the key link in a semiconductor supply chain that spans multiple countries and tens of thousands of miles.

The island derives strategic value from this dominance, in theory, reaping a dual deterrent that both discourages a Chinese assault and, should that fail, secures American protection. Last year, the founder of Taiwan’s premier chipmaker, Taiwan Semiconductor Manufacturing Company, called Taiwan’s semiconductor foundries a “holy mountain range protecting the country.” After a war game exercise, analysts at the think tank Center for a New American Security described the “silicon shield” as a “defensive masterstroke” that made the island “indispensable to both sides” of U.S.-China competition.

The “silicon shield” invites Taipei to seek security in vulnerability, confident its Western clients will protect it. However, for this dual deterrent to work, Taipei bets that Beijing cares enough about a steady supply of chips from Taiwan to counteract its parallel conviction that the island belongs in China’s civilizational core. If it is wrong, the result is not a dual deterrent; it is a double disaster. In such a worst case, Taiwan’s vulnerability triggers both Chinese attack and an American intervention insufficient to protect an island that underinvested in its own defense.

The “silicon shield” should make U.S. policymakers deeply uncomfortable. China is already working to indigenize semiconductor production; its share of the industry has grown from 3 percent to 9 percent in recent years. Beijing’s quest for a “closed loop semiconductor manufacturing ecosystem” strikes at the shield’s very logic.

Counterintuitively, to tip Taipei’s strategic calculus in Washington’s favor, Washington should replicate China’s effort to reshore its own semiconductor capabilities and reduce reliance on Taiwan’s foundries. Such an effort should, by extension, encourage Taiwan to upgrade its own hard defense capabilities.

Fortunately, Washington policymakers have a mechanism readily available to help motivate Taiwan’s pivot from “silicon shield” to denial defense. The China competition bill on Capitol Hill, which may pass this year, would provide $52 billion for the U.S. semiconductor industry. When coupled with similar $48 billion legislation in Europe, Western countries could devote a combined $100 billion towards domiciling semiconductor research, design, and manufacture in less treacherous locales while simultaneously making Taiwan more serious about its self-defense.